Please ensure Javascript is enabled for purposes of website accessibility
Log In Help Join The Motley Fool
Free Article Join Over 1 Million Premium Members And Get More In-Depth Stock Guidance and Research
By Tyler Crowe – Updated Apr 26, 2019 at 11:15AM

Cleveland-Cliffs has already contracted all of its production for 2019 and expects high margins thanks to Vale's decision to cut production for safety inspections.

At the beginning of 2018, Cleveland-Cliffs (CLF -0.39%) looked like a company that was finally putting its troubled past behind it. This past quarter and heading into 2019, the iron ore producer thinks it is poised for a great year. Management has been confident enough in its outlook for the year that it has initiated both a dividend and a share repurchase program in the past six months. What's more, the iron ore industry could be headed for a bit of a supply crunch that could significantly boost the prices for Cleveland-Cliffs higher-quality iron ore pellets.

Let's take a look at this quarter's results and why management thinks this year will be another good one for shareholders.

Cleveland-Cliffs has had a lot of funky one-time gains and losses over the past few years. This quarter was no different. This past quarter, the company realized some deferred tax assets that boosted net income by $490 million. This was on top of some tax benefits this time last year that also bolstered the bottom line as well as the third-quarter gain from selling its Australia business. Adjusting for these one-time events, earnings per share for Q4 2017, Q3 2018, and Q4 2018 were $0.21, $0.67, and $0.55, respectively.

From an operations standpoint, it was a bit of a mixed bag. Total sales were up significantly compared to this time last year, but gale-force winds on the Great Lakes in October and November prevented several shipments to its clients. It was able to move some of that product in January before shipping locks closed for the winter. 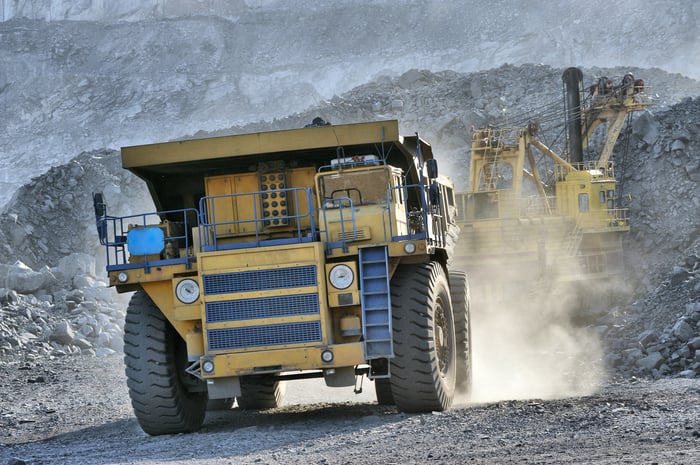 Looking into 2019, Cleveland-Cliffs expects another good year. It has already sold out all 20 million tons of production for the year to customers and expects cash costs to be in the $62- to $67-per-ton range for the year. Based on current spot prices and management's projections, it expects sales to be in the $111- to $116-per-ton range based on some early assessments of the market after Vale's recent decision to shutter several mines for safety inspections after the second catastrophic mining dam collapse in less than three years.

Management also made two significant announcements that were sort of buried in its conference call. One is that it has elected to increase the production capacity of its planned hot briquetted iron (HBI) manufacturing facility after greater-than-expected customer demand. Nameplate capacity for the facility will now be 1.9 million tons versus the original plan for 1.6 million tons per year. Also, concurrent with the increased demand for iron ore pellets at this HBI facility, the company is looking to restart its previously idled Empire mine and pelletization facility in Michigan. The details on this expansion were scant, but it expects nameplate production of 3.2 million to 3.5 million tons of pellets per year with start-up sometime in 2021.

Back in December, Cleveland-Cliffs announced that the board of directors authorized a $200 million share repurchase program. That shareholder return initiative comes right on the heels of management's decision to resume a regular dividend. On the company's conference call, CEO Lourenco Goncalves explained why the company was in a position to start these shareholder-friendly actions and the progress it made on that buyback program thus far.

As you recall, a few years ago, after the billions of dollars in impairment charges we had to take related to the terrible investments made by the previous management of this Company, we ended up with a balance sheet showing a negative $2 billion in equity value. As a direct result of our performance during the last four years and particularly in 2018, our book value is now positive $424 million. With that, we are able to implement true initiatives to return capital to our shareholders: a quarterly dividend paid for the first time this year in January and a share repurchase program which we initiated in the fourth quarter of 2018.

The share repurchase program was put in place for one simple reason. Our shares were and still are ridiculously cheap. So far, we have bought approximately 5.4 million of CLF shares at prices as low as $7.48 and not higher than $9.25. Even at yesterday's closing price of $10.90, using our cash to repurchase shares is a value-accretive use of capital.

We still have plenty of dry powder from the previously authorized $200 million share repurchase program, and we can easily increase the authorized amount to buy back even more stock. In summary, until the CLF share price starts representing the real value of our company, we plan to continue to buy back our stock.

You can read a full transcript of Cleveland-Cliffs' conference call here. 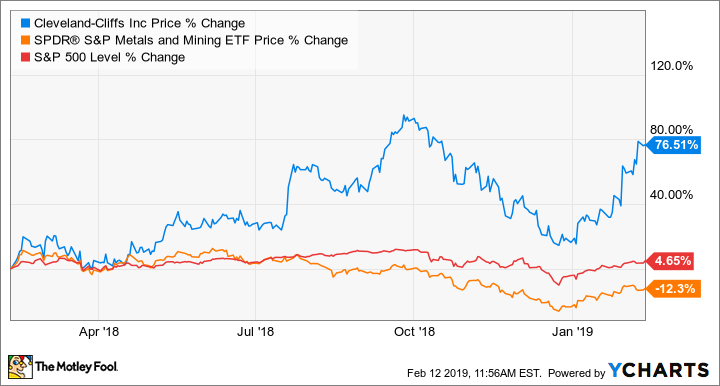 Management thinks shares are cheap -- the numbers back that up

Cleveland-Cliffs' stock has been incredibly volatile, but over the past few years, they have been on an absolute tear, gaining more than 500% in the past three years. Even though shares have come a long way, they still trade at a price-to-earnings ratio of 3.1 times. There are a few one-time gains baked into that, but even if we strip out those one-time gains and value the company on enterprise value to EBITDA, it is trading for 6.6 times, which is still incredibly cheap.

Iron ore producers are always going to trade at a discount to the broader market because it is a cyclical and capital-intense business. Still, management has cut debt, returned the company to profitability, invested in higher-margin projects set to go live in a few years, and returned some cash to investors. All of these factors suggest the stock still has a lot more room to run, and management's decision to buy back what it believes is an incredibly cheap stock could pay off down the road. Based on its 2019 outlook, investors could benefit from those moves sooner rather than later.