Shares of OneMain Holdings (NYSE:OMF) are up more than 12% as of 3:20 p.m. EST after the company reported fourth-quarter earnings and instituted a quarterly dividend of $0.25 per share. OneMain Holdings improved on almost every metric in 2018 and issued guidance for 2019 that suggests the year ahead could be even better. 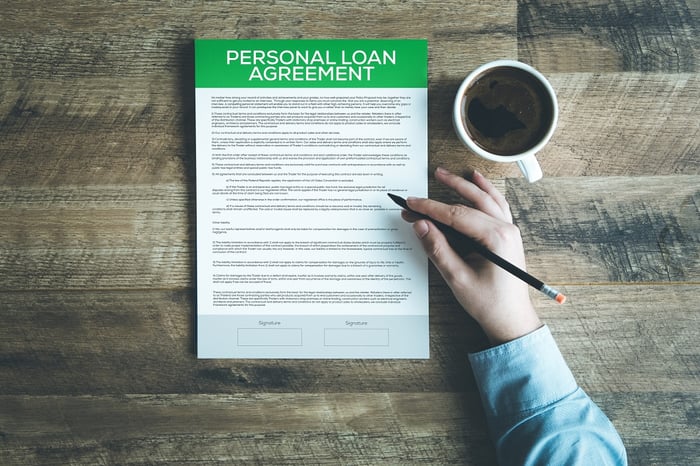 For the full year, credit trends were favorable, as the company reported a net charge-off ratio of 6.5%, down from 7% in 2017. OneMain issued rather rosy guidance for 2019, which is detailed in the table below.

Notably, OneMain's guidance calls for loan growth of 7.5% at the midpoint in 2019, offset only slightly by a 3% increase in operating expenses, which should lead to margin expansion as revenue grows faster than expenses.

On the conference call, company management said it was continuing a trend of deleveraging the business, using its earnings power to build equity and pay down debt. Douglas Shulman, the company's president and chief executive officer, said that while the company isn't seeing any warning signs in credit performance, management is "mindful that we're 10 years into an economic expansion." The company's adjusted tangible leverage ratio fell from 9.4 times at the end of 2017 to 6.9 times at the end of 2018, a marked improvement in just one year.

Wall Street is pleased with OneMain Holdings' belief that it can continue to deleverage its balance sheet, grow loans at a healthy single-digit clip, and afford to pay a beefy $0.25 quarterly dividend, its first as a public company. The new dividend gives shares a current yield of 3% after today's pop in the stock price, putting it on the radar of income investors for the first time.

OneMain's earnings power and targets for lower leverage also caught the attention of Moody's, which upgraded the company's credit rating from B1 to Ba3. The company is now just three notches away from an investment-grade rating. Though management doesn't expect the upgrade to have a significant impact on its borrowing costs, they noted that the upgrade will open its debt to purchase by a greater number of investors, making it easier to access credit to finance its balance sheet.

Consumer finance businesses are fickle things, subject to the whims of the credit markets to finance their balance sheets and the financial health of consumers to generate income. But for today, at least, OneMain Holdings and its shareholders see blue skies ahead.