Please ensure Javascript is enabled for purposes of website accessibility
Log In Help Join The Motley Fool
Free Article Join Over 1 Million Premium Members And Get More In-Depth Stock Guidance and Research
By Asit Sharma – Updated Apr 22, 2019 at 11:54AM

The company also benefited from higher room rates in the last three months of 2018.

Hospitality giant Hilton Worldwide (HLT -0.72%) issued fourth-quarter 2018 earnings on Wednesday before markets opened. The owner of Hilton, Doubletree, Embassy Suites, and other luxury, midscale, and budget brands saw brisk revenue growth in the quarter as room expansion and higher rates compensated for flat occupancy against the prior-year quarter. Below, we'll evaluate Hilton's performance using common hotel industry metrics, and also discuss management's outlook for 2019. (Note that in the discussion that follows, all comparable numbers refer to the prior-year quarter, the fourth quarter of 2017.)

What happened with Hilton this quarter? 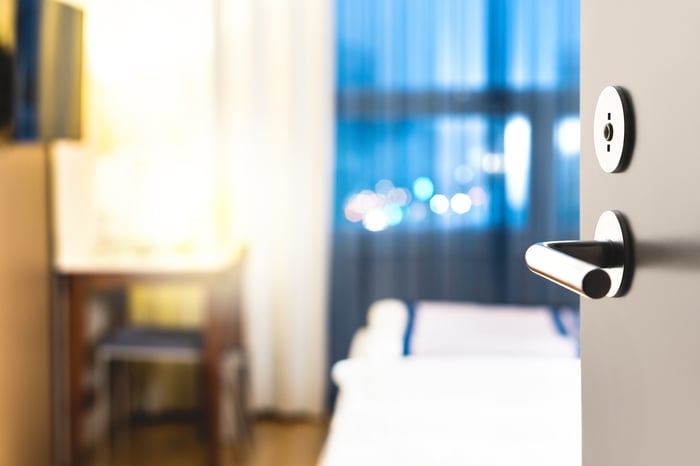 In Hilton's earnings press release, CEO Christopher Nassetta commented on both the brisk growth of the last three months and management's optimistic outlook for the quarters ahead:

We are pleased with our fourth quarter and full year results, exceeding the high end of our guidance for Adjusted EBITDA and diluted EPS, adjusted for special items, driven in part by better than expected net unit growth, up roughly 7 percent versus the prior year. In particular, we continued to expand our luxury portfolio with several exciting openings and the launch of our luxury collection brand, LXR Hotels & Resorts. We expect continued strength in room growth, combined with RevPAR growth, to provide a good setup for the year ahead.

At the midpoint of the full-year range, Hilton will improve its adjusted EBITDA by roughly 8% against the $2.1 billion earned in 2018. Investors have cheered the high-single-digit projected earnings bump: As of this writing, shares have ascended as much as 7% in the trading session following Hilton's earnings release.