Please ensure Javascript is enabled for purposes of website accessibility
Log In Help Join The Motley Fool
Free Article Join Over 1 Million Premium Members And Get More In-Depth Stock Guidance and Research
By Ashraf Eassa – Updated Apr 25, 2019 at 12:38AM

These are different businesses that may both be attractive to income investors who like dividends.

Semiconductor giant Texas Instruments (TXN -0.01%) and data storage specialist Seagate (STX) are vastly different businesses. Texas Instruments builds a diverse array of chips that go into a wide variety of devices, including cars, smartphones, PCs, TVs, and more. The company also makes those calculators that you probably had to use at some point in your academic career. Seagate, on the other hand, builds storage products -- mainly hard disk drives.

Even though the companies build very different products, tech investors -- particularly income-oriented ones that appreciate companies with generous dividends -- might be interested in choosing between the two companies as potential investments.

To that end, let's compare the two in some important ways and see which comes out ahead. 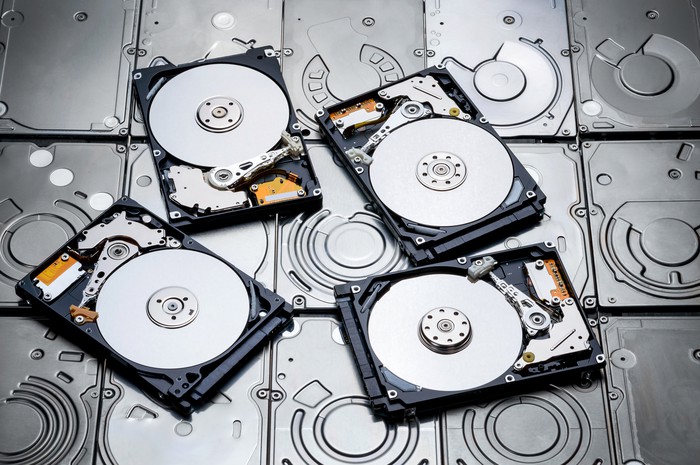 Seagate isn't a stock you should buy if you're looking for business growth over the next couple of years. Analysts project the company will see its revenue decline by 4.9% in fiscal 2019 (aligns with current fiscal year) to $10.63 billion, followed by a more moderate decline of 1.2% to $10.5 billion the following year. On the earnings per share front, things aren't looking too rosy, either. The company is expected to see EPS decline to $5.08 (from $5.51) in fiscal 2019 and then rise slightly to $5.17 in the following year.

Texas Instruments isn't looking much better on the growth front. Analysts currently model Texas Instruments' fiscal 2019 revenue at $14.94 billion, which would represent a 5.3% drop from the revenue that the company saw in fiscal 2018. Things are expected to improve in the following year, though, with analysts modeling 5.4% revenue growth in the company's fiscal 2020. On the EPS front, analysts model a 7.7% decline in fiscal 2019 followed by a large snap-back in fiscal 2020 to $5.78, representing 12% growth.

These analyst figures are just predictions and could ultimately prove too high or too low, but for now it seems Texas Instruments has slightly better growth prospects over the next couple of years -- although neither company is set to deliver impressive growth.

Both companies have excellent capital return programs that consist of generous dividends and share repurchases. Seagate, for example, offers a quarterly dividend that, on an annual basis, works out to $2.52 per share -- about a 5.6% dividend yield at current levels.

Texas Instruments' quarterly dividend works out to $3.08 on an annual basis, yielding 2.95%.

Now, if you were to pick one of these two companies' stocks based solely on dividend yield, Seagate might seem like the obvious choice. Indeed, Seagate's dividend yield is about 90% greater than Texas Instruments'. There's a catch, though.

Texas Instruments has been consistently boosting its dividend annually, while Seagate's dividend has stagnated, as the chart below illustrates: 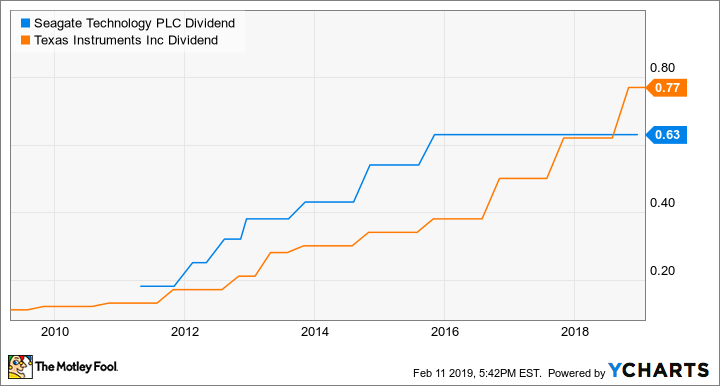 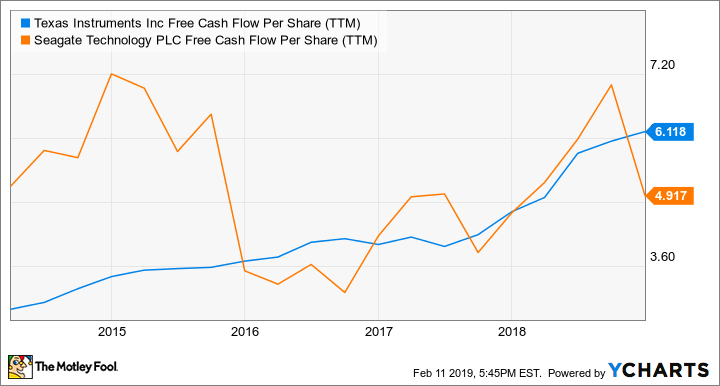 Texas Instruments' free cash flow per share has been generally on the rise while Seagate's, though up significantly over the last couple of years, has dropped dramatically. Seagate still generates more than enough free cash flow to comfortably cover its dividend, but the company also seems committed to continuing to buy back stock (Seagate dropped $136 million on share repurchases last quarter -- close to the $180 million that it spent on the quarterly dividend.)

Texas Instruments, on the other hand, is exposed to a wide range of markets (end market diversification is generally a positive, as it reduces risk) and has strong positions in the markets in which it participates. There's a case to be made that Texas Instruments is a "safer" business than a computer storage company like Seagate. While Texas Instruments isn't a cheap stock by any means, I think the current multiple it commands is probably fair.

Seagate is certainly cheaper, but I think that Texas Instruments' relatively safer business and better near-term growth prospects make this particular comparison hard to call in either company's favor.

Ultimately, if you're trying to calculate the better pick between these two stocks, you're going to need to determine what matters more to you. Texas Instruments is pricier and offers a less generous dividend yield, but in return you get an arguably safer business and a more predictable dividend growth history. Seagate offers a better dividend yield and a cheaper valuation, but its business is less predictable, and a nontrivial portion of it is coming under fire from flash-based solutions.