Shares of Mattel (MAT 0.89%) recently rallied after the toy maker's fourth-quarter earnings topped analysts' expectations. Its revenue fell 5% year over year (3% on a constant currency basis) to $1.52 billion, but beat expectations by $80 million.

Mattel's reported earnings per share of $0.04 beat estimates by $0.23 and marked a big improvement from its loss of $0.82 per share a year earlier. This marked the first time Mattel cleared both top- and bottom-line expectations in over two years. 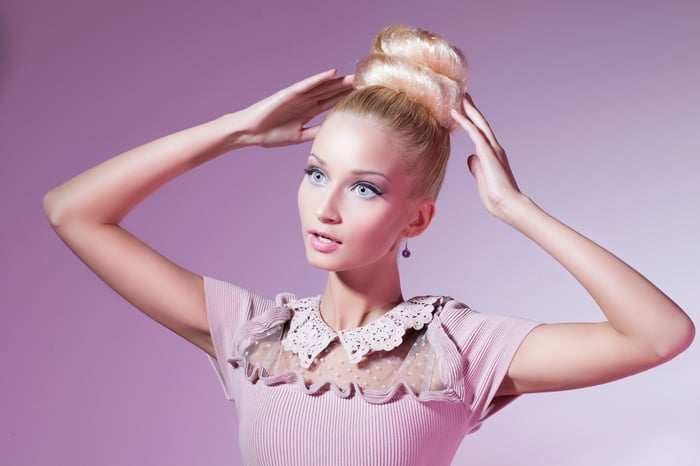 Mattel previously struggled with soft demand for its core products and the bankruptcy of Toys R Us, which flooded the market with cheap toys. The suspension of its dividend in 2017 also led to income investors dumping the stock.

However, Mattel's fourth-quarter numbers indicate that its business is finally reaching an inflection point. Four factors could drive this beaten-down stock much higher this year.

Sales of Barbie products rose 12% year over year (15% in constant currency), and the doll marked its fifth straight quarter of growth. The brand, which carried Mattel through the Toys R Us crisis, also posted its highest full-year sales in five years.

Sales of Hot Wheels products climbed 9% annually (12% in constant currency), and the brand achieved its highest full-year sales ever. The stellar growth of those two brands indicates that demand for Mattel's classic toys remains robust. The strength of Barbie and Hot Wheels offset poor sales of Fisher-Price, Thomas & Friends, and American Girl products -- which all posted double-digit declines.

Mattel's total "Power Brands" revenue, which includes all those brands, fell 6% annually to $1.2 billion. Mattel believes that the Fisher-Price brand should recover as it moves past the Toys R Us liquidation, Thomas & Friends should improve with higher sales in international markets like the U.K., and American Girl is "in the midst of a multi-year turnaround".

Those efforts, along with robust demand for Barbie and Hot Wheels toys, could eventually lift its Power Brands revenue (and total sales) back to positive territory. Analysts expect Mattel's revenue to rise about 2% this year.

Mattel attributes that expansion to a "structural simplification program" -- which achieved $521 million in savings in 2018 by cutting costs, simplifying the company's organizational structure, and optimizing its supply chain processes. 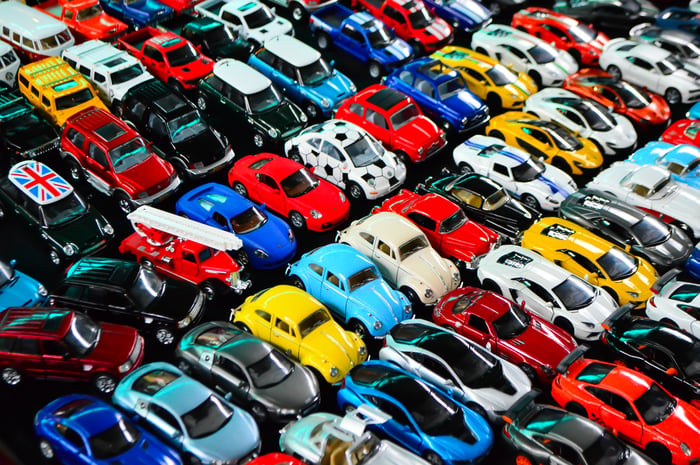 3. It's cheaper than Hasbro

Looking further ahead, analysts expect Mattel to grow its EPS sevenfold to $0.56 per share in fiscal 2020, and it currently trades at 30 times that estimate. That multiple looks high, but it could contract quickly if Mattel's earnings climb back above $1 per share (which it last achieved in fiscal 2016): 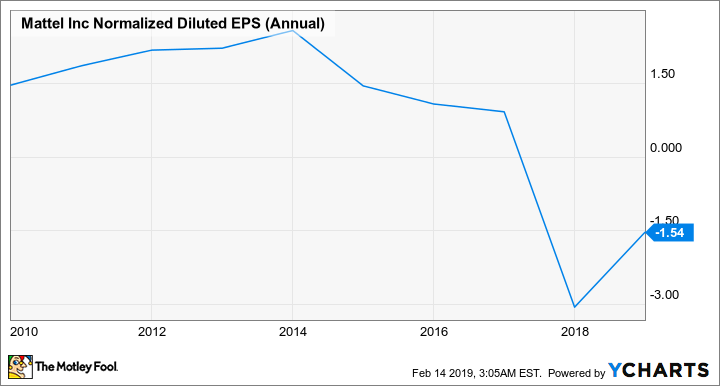 If Mattel's earnings rise back to historically "normal" levels, it could eventually bring back its dividend -- which would bring back income investors.

4. Catalysts on the horizon

Sales of Mattel's toys could also be boosted by a series of major catalysts this year. Disney's Toy Story 4, which premieres this June, could boost demand for its tie-in toys.

Mattel also plans to launch new Barbie products to commemorate the brand's 60th anniversary. The upcoming live-action Barbie movie, which will be launched through a collaboration between Mattel's new film division and AT&T's (T 1.05%) Warner Bros, could help Barbie post another year of double-digit sales growth. The new Hot Wheels film, which it will also launch with Warner Bros, could also bolster the brand's sales.

But that's not all. A new Masters of Universe film produced by Sony could revive interest in the decades-old fantasy franchise, and it plans to capitalize on the popularity of the South Korean boy band BTS with new toys this summer.

Should you buy Mattel today?

Mattel's turnaround is working, and the stock still looks cheap after losing nearly half its value over the past three years. I think investors can consider starting a small position in Mattel and buying a little more each quarter -- so long as its sales growth stabilizes and its margins keep improving.