Please ensure Javascript is enabled for purposes of website accessibility
Log In Help Join The Motley Fool
Free Article Join Over 1 Million Premium Members And Get More In-Depth Stock Guidance and Research
By Matthew DiLallo - Updated Apr 26, 2019 at 11:21AM

The fourth quarter was brutal for the oil industry, as oil prices crashed 40% from their peak in early October. While that slump in the oil market had an impact on land-based drilling activities, it didn't spill over into the offshore segment, because those projects have much longer lead times. That meant Oceaneering International's (OII 12.12%) fourth-quarter results were able to improve both year over year and sequentially. The company anticipates that contract wins throughout 2018 will drive its results higher in 2019.

Oceaneering's results came in as anticipated: 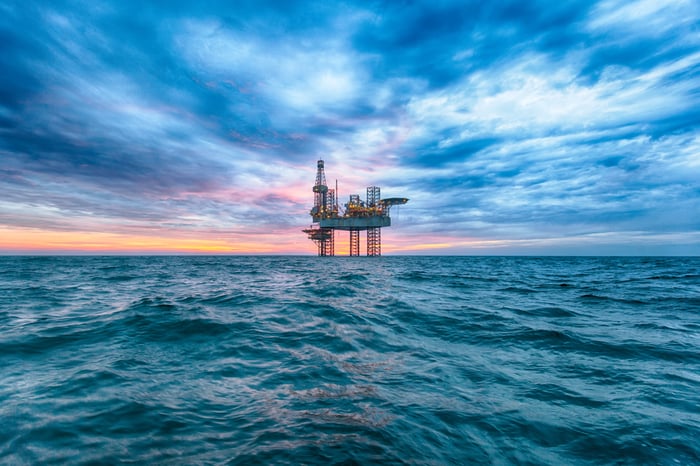 CEO Rod Larson commented on the past year:

The full year of 2018 unfolded largely as we expected, with increased levels of oilfield activity being more than offset by lower pricing for our services and products. Year over year, our 2018 consolidated revenue approximated that of 2017, with revenue increases in ROV [remotely operated vehicles], Subsea Projects, Asset Integrity, and Advanced Technologies being offset by a substantial revenue decline in Subsea Products. Despite record earnings in our Advanced Technologies segment, consolidated adjusted operating results decreased $74.2 million, with the largest declines in our Subsea Products and ROV segments. In 2018, each of our operating segments contributed positive EBITDA, and overall we generated adjusted EBITDA of $143 million. Annual capital expenditures totaled $178 million, including $68.6 million for acquisitions. We ended the year with $354 million in cash.

Both the fourth quarter and full year largely came in as Oceaneering expected, which was mainly because the company books orders in advance of product sales and secures contracts for the project services it provides. However, it was still a down year for the company, as revenue declined while its net loss widened. The company also outspent cash flow to better position itself for future growth, which ate into its cash position.

That growth, however, should materialize in 2019. Larson stated:

We expect our 2019 financial results to improve year over year based on increased activity across all of our segments. For the year, we anticipate generating $140 million to $180 million of EBITDA, with positive EBITDA contributions from each of our operating segments. At the midpoint of this range, our EBITDA for 2019 would represent a 12% increase over 2018 adjusted EBITDA.

The CEO further noted that he expects pricing and margins to be relatively stable despite the recent volatility in the oil market because customers have been slowly increasing their spending on offshore development projects over the past year. That leads the company to believe it should generate free cash flow in the coming year.