Trupanion (TRUP 5.00%) isn't your typical insurance company. Instead of insuring human health, or a home, or a car, Trupanion insures pets. Specifically, it ensures cats and dogs. And as you might imagine if you've ever had to put a beloved pet down too soon, there's a huge market for such insurance.

As founder and CEO Darryl Rawlings said in this week's conference call, "The variance in cost between a lucky and unlucky pet is significant." That helps explain why so many North Americans are signing up for Trupanion -- a trend that continued to show brisk growth in the fourth quarter of 2018. 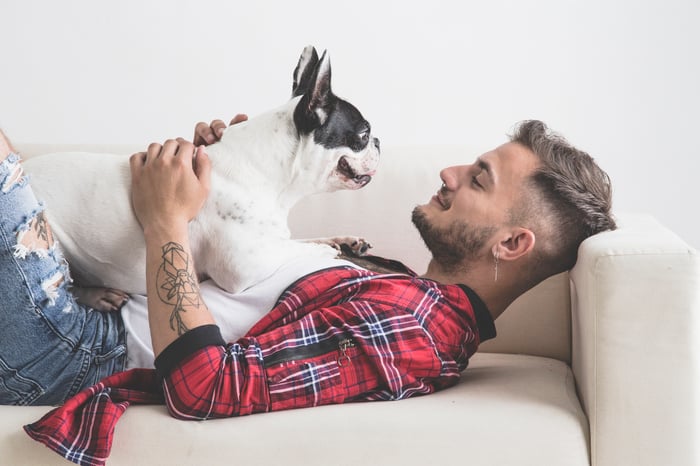 Before getting into the details of Trupanion's earnings, however, let's take a look at the company's headline numbers.

The core part of Trupanion's business is its subscription insurance coverage. This subcategory showed somewhat slower growth of 20% to $71 million during the quarter.

Trupanion ended the quarter with 430,770 pets enrolled in subscription insurance, up 16% from the same time last year. Monthly retention stayed stable at roughly 98.6% -- showing that pet owners largely stay with Trupanion once signed on. And the monthly average revenue per pet continued to climb, up 4.4% to $54.34 from the end of 2017.

Some of the company's key metrics showed progress, while others took a slight step back. Let's unpack them.

First, gross profit from subscriptions contracted 48 basis points to 18.71%. At the same time, vet invoice payments -- the payments Trupanion makes on behalf of its clients -- climbed 25.5%, a rate faster than revenue growth.

Speaking on the conference call, management addressed the former, saying the company saw an acceleration in leads for subscription pet insurance, but those leads had yet to have enough time to convert into actual policies. It also said there was increased interest in Canada -- its most mature market -- and that because people are most likely to cancel within the first 90 days of coverage, an increase in sign-ups can actually lead to lower margins if and when some of those newer clients cancel service. Investors will have to wait until the next quarter to see how many of those leads convert.

As for the latter, increased vet expense, there's only so much control Trupanion has. In any given quarter, the number of pets needing medical care can vary -- but if Trupanion has done its actuarial homework, it should all even out to the company's benefit in the long run. In fact, the company singled out increase spending in data and actuarial expenses as one of the focuses for 2019.

Update on concerns raised by short-sellers

In late 2018, Trupanion's stock sunk when short-sellers accused the company of breaking some state laws. Specifically, they accused the company of having its independently contracted Territory Partners (essentially, sales representatives) solicit policies without uniformly being registered to do so, and/or compensating vets who got their customers to sign up for insurance with Trupanion.

The company responded that while some Territory Partners chose to become registered, the vast majority of subscription pet plans were obtained via a suggestion from the vets themselves. It also discontinued a program that could be viewed as offering incentives for vets to refer patients to Trupanion.

While it appears that some state agencies may have opened up investigations into such practices, Rawlings did not appear concerned, saying:

We constantly have ongoing dialogue with different regulators. And we're not aware of anything that has any material impact on the business. And if we were, we would let the markets know about it.

Trupanion finished 2018 with a war chest of $86 million in cash plus investments versus just $13 million in long-term debt. That will help allow the company to continue testing new lead strategies in the year ahead. Rawlings also said Trupanion would spend more to improve the aforementioned actuarial teams, software and IT, and member experiences.

These help strengthen the three primary moats Rawlings touts for Trupanion: face-to-face contact between vets and Territory Partners, the installation of Trupanion Express software on vet computers, and the collection of that data for additional insights the competition doesn't have access to.

Why Trupanion Stock Was Down 10% on Thursday