Over 100 million Americans now have diabetes or pre-diabetes, according to the Centers for Disease Control and Prevention. The World Health Organization estimates that there were around 422 million people worldwide with diabetes in 2014, and that number is almost certainly much higher now. 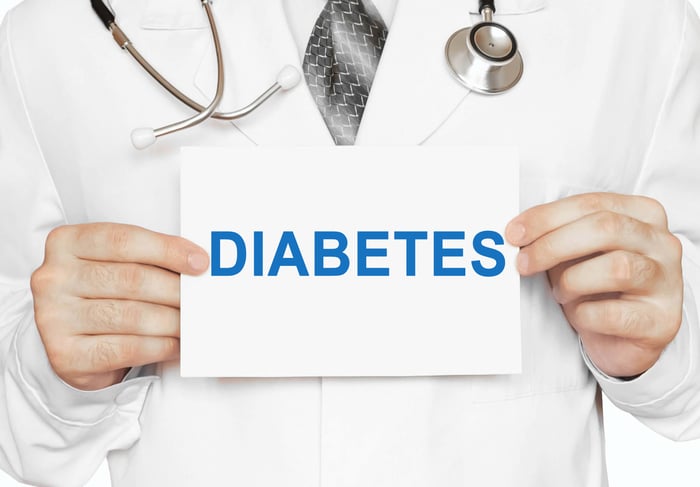 Get pumped about this stock

Brian Feroldi (Insulet): Millions of people with diabetes inject themselves with insulin each day to keep their blood glucose levels in check. A few decades ago, insulin pumps were introduced to the market to help automate this process and make the dosages far more precise. This results in much better blood sugar control with far fewer injections.

An innovative company called Insulet set out to address this problem by creating a disposable insulin pump that is worn directly on the body. The company named its device Omnipod and has been growing at a double-digit rate for more than a decade as patients and providers warm up to the benefits of choosing a tubing-free device.

Since the market for diabetes products is huge, the opportunity for Omnipod is still substantial. What's more, Insulet believes that the device can be used to deliver other types of drugs, too. The company already makes money from a partnership program that delivers Amgen's cancer drug Neulasta to patients. This is a great proof-of-concept program that could lead to other partnerships.

In total, investors should have plenty of reasons to believe that Insulet can continue to drive double-digit revenue growth. That makes it a great diabetes stock for growth-focused investors to get to know.

Just weeks away from a make-or-break decision

Although Lexicon does have one approved drug already on the market -- Xermelo, a treatment for carcinoid syndrome diarrhea -- it isn't designed to be a big revenue generator. Rather, that role has been given to Zynquista, a next-generation type 1 and 2 diabetes drug that works at inhibiting SGLT1 and SGLT2. Mind you, there are already around a half-dozen SGLT2 inhibitors on pharmacy shelves to treat type 2 diabetes, but none offer inhibition in both the kidneys (SGLT2) and intestines (SGLT1) to help maintain glycemic balance and excrete excess glucose.

What makes Lexicon such an intriguing case is that in mid-January, the Food and Drug Administration's (FDA's) advisory panel split right down the middle, 8 to 8, on its recommendation of Zynquista to the FDA for type 1 diabetes. Half of the panel sided with late-stage clinical data that easily met the primary endpoint in improving glycemic balance, while the other half worried that considerably higher instances of diabetic ketoacidosis (something also seen to some degree with SGLT2 inhibitors) didn't merit their recommendation. Keep in mind that type 2 diabetes accounts for 90% to 95% of all cases, so what the FDA's panel was reviewing is ultimately for a smaller pool of patients.

So, what happens now? That's the interesting part that bears watching. With a PDUFA decision date of March 22, 2019, we'll soon know which way the FDA will rule. It isn't required to follow the advice of its panel, albeit it does more often than not. But at an 8-to-8 stalemate, any decision -- from approval to a complete response letter (i.e., rejection) -- is possible.

Not only will this decision make or break Lexicon, but it'll provide a substantial lift or weight on its development partner Sanofi, which is currently conducting type 2 diabetes trials, with Lexicon in charge of the type 1 diabetes studies. Should Lexicon's lead drug fail to win approval from the FDA, it could put Zynquista's future, and Sanofi's partnership with Lexicon, in doubt. If it does gain approval, a safety precedent will likely be set that allows Zynquista a good shot to dazzle in type 2 diabetes studies to come.

Get pumped about this stock, too

Keith Speights (Tandem Diabetes Care): Like Brian, I have my eyes on the stock of a company that makes insulin pumps. Tandem Diabetes Care enjoyed a phenomenal year in 2018. The stock skyrocketed 1,300%. That's enough to turn any investor's head. After pulling back for a few months, Tandem is again near its all-time high.

The company's success has been fueled by its steady introduction of innovative new insulin pumps over the last few years. Tandem's latest product, the t:slim X2 with Basal-IQ technology, is the best yet. It integrates with DexCom's enormously popular G6 continuous glucose monitoring (CGM) system. It's smaller than rivals' insulin pumps. And its Basal-IQ technology helps predict when insulin levels are about to get outside of thresholds.

Tandem believes that the convenience and features that its products offer will help boost the number of "pumpers" (diabetic patients using insulin pumps) in the U.S. from 550,000 to 900,000. There's an even bigger market opportunity outside the U.S.

This stock probably won't appeal to all investors. Tandem isn't profitable yet but still claims a market cap of close to $3 billion. However, the company thinks it's on track to reach breakeven on a cash flow basis in the second half of this year. With its tremendous growth prospects, Tandem definitely looks like a diabetes stock to keep your eyes on in February and beyond.