Redfin (RDFN) reported fourth-quarter results on Feb. 14. The technology-powered residential-real-estate company is expanding its sales at a rapid clip, though its growth investments continue to suppress its profits.

Revenue in Redfin's core home brokerage business rose 13% year over year to $94 million. CEO Glenn Kelman said the somewhat muted growth was due in part to a "weakening" real estate market, particularly in coastal cities where Redfin has a large presence.

Still, Redfin's share of U.S. existing home sales by value increased 10 basis points to 0.81%. The discount brokerage's low commissions are no doubt contributing to these gains; Redfin said it saved its customers more than $31 million in the fourth quarter and more than $154 million over the full year when you compare its commissions with the typical 2.5% its rivals charged. In turn, the company earned customer satisfaction scores that were 49% higher than those of its competitors. 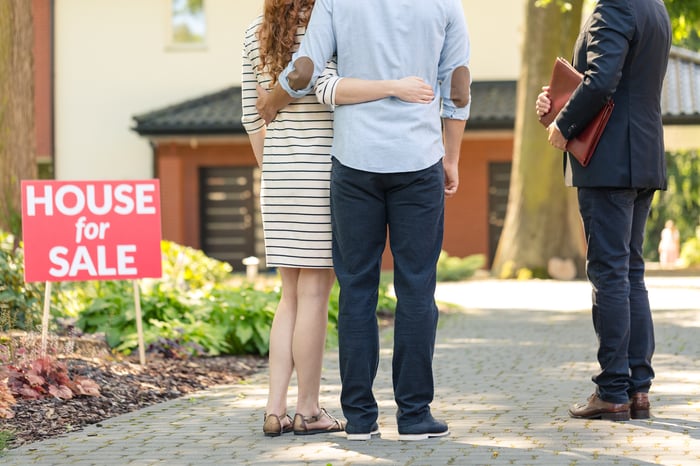 Redfin also continues to build out its RedfinNow home-flipping business. When asked about the segment's strong performance during a conference call with analysts, Kelman explained his perspective on Redfin's competitive advantages.

Sometimes people ask, "How do you expect to compete on this when it's all that other businesses do?" And I always want to turn that question around: How can you possibly compete when most customers want to compare a brokerage sale to an instant offer? How can you possibly compete if you're paying acquisition costs to meet both the seller and the buyer? We've been selling houses for 13, 14 years, something like that, and being able to do that is the No. 1 qualification for being good at flipping houses. We know what we can sell them for, and we can sell them for top dollar. So I think our competitive position is good.

In all, Redfin's revenue surged 30% to $124.1 million in the fourth quarter. Yet the company's growth investments continue to weigh on its profitability. Real estate services gross margin fell nearly 6 percentage points to 27.8%, primarily because of higher personnel costs as Redfin boosted its agent headcount.

The larger projected loss is due in part to Redfin's decision to ramp up its advertising investments, which have shown positive results to date.

"Our 2019 ad campaign will increase this year's losses, especially in the first quarter when we buy media for recruiting customers who won't close until the summer," Kelman said. "The ads should accelerate 2019 revenue growth and contribute profits by 2021."