Please ensure Javascript is enabled for purposes of website accessibility
Log In Help Join The Motley Fool
Free Article Join Over 1 Million Premium Members And Get More In-Depth Stock Guidance and Research
By Leo Sun - Updated Apr 11, 2019 at 11:00AM

The e-commerce titan is catching up to Google and Facebook in online ads.

That was a surprising development, but it didn't indicate Amazon would disrupt Google and Facebook's duopoly. However, a new Nanigans survey suggests the gap is narrowing quickly, with marketers allocating 14% of their digital ad spending to Amazon, versus 21% for Google and 19% for Facebook/Instagram. 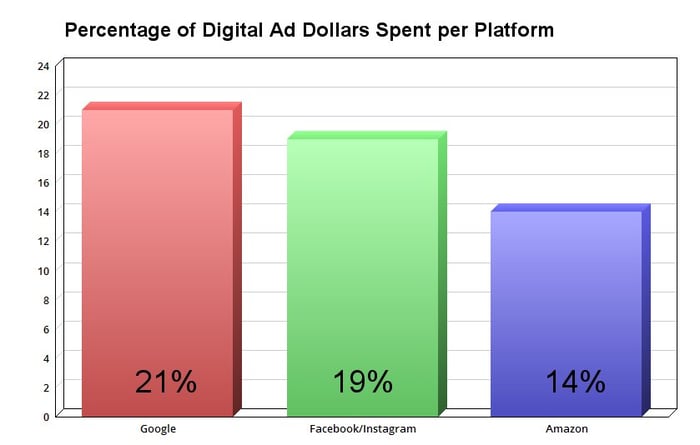 Half of those respondents plan to allocate more ad dollars to Amazon within the next 12 months, with an average spending boost of 25%. Some marketers will shift ad dollars from Google and Facebook to Amazon, but 41% will incrementally increase their ad budgets to support new Amazon ads.

That's great news for Amazon, which could turn its ad business into a third pillar of growth alongside its e-commerce and cloud businesses. But it's an alarming development for Google and Facebook, as they both lack Amazon's access to consumers' shopping habits. Ongoing privacy concerns about Google and Facebook's ads could also make Amazon a more attractive ad platform.