Cisco Systems (NASDAQ:CSCO) and Microsoft (NASDAQ:MSFT) both provide essential services for companies around the world. Cisco serves as the backbone of the internet, and it's difficult to imagine the world without Microsoft's Office and Windows software that is used by just about everyone, even those who use a Mac.

Both Cisco and Microsoft have outperformed the S&P 500's return of about 50% over the last five years. Cisco stock is up 120%, while shares of Microsoft have gained 183% over that time. We'll compare both companies' financial fortitude, valuation, dividends, and competitive moats to determine which is the better buy for investors today.

Check out the latest Cisco and Microsoft earnings call transcripts. 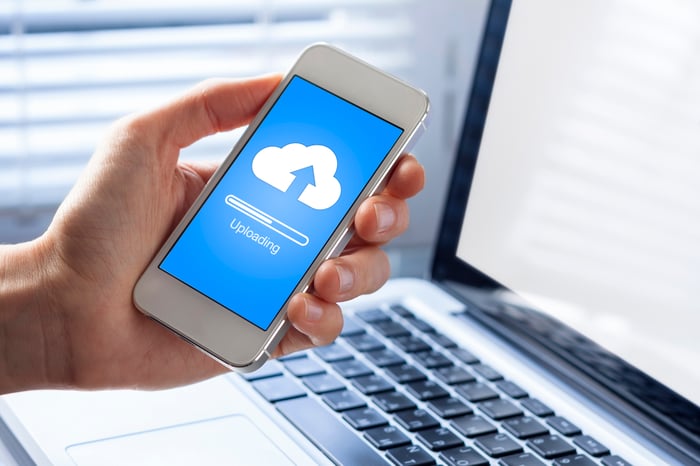 The first crucial test is financial fortitude, which tells us how well each company can stand up to adversity during those inevitable periods of soft demand. This test is also essential for evaluating which company has the resources to take advantage of growth opportunities, such as making strategic acquisitions or investing in breakthrough products, as well as funding a shareholder-friendly capital return policy through dividend payments and share repurchases.

With that in mind, here's how Cisco and Microsoft compare on key financial metrics:

Microsoft has more cash on its balance sheet, but it also generates more than twice the amount of annual revenue as Cisco. However, note that both companies generate about the same amount of free cash flow as a percentage of revenue. It's evident that Cisco and Microsoft are very profitable companies that can produce tremendous amounts of cash out of operations.

The important thing is that while both companies carry debt on their balance sheets, they both have more than enough cash to offset it. Adjusting for each company's relative size, both companies appear to be equally sound on the basis of financial fortitude.

A comparison between two stocks is never complete without checking each stock's valuation. Here's how these two companies stack up on a range of popular valuation metrics:

The trailing P/E (price-to-earnings) ratio for Cisco is not useful here because of extra one-time expense items the company incurred as a result of tax reform last year. The forward P/E based on next year's earnings estimates is a better measure of value.

Looking at the forward P/E and price-to-free cash flow ratio, Cisco is clearly the better value. Even when we adjust for expected earnings growth, Cisco has a price-to-earnings-growth ratio of 1.74, which is not that much higher than Microsoft's 1.68.

The comparison is weighted more in Cisco's favor when we look at dividends. Cisco currently has a much higher yield than Microsoft. Plus, both Cisco and Microsoft pay out roughly the same percentage of free cash flow as dividends, which makes Cisco's higher yield look even better since the company generates plenty of cash to sustain its payout.

Cisco makes the internet work. It's the leader in providing services and networking equipment to companies of all sizes, governments, and service providers. With the rapid growth of the Internet of Things and cloud-computing, Cisco's networking technology is in higher demand than ever. More devices are coming online than ever before, and this is fueling growth on the top line. Revenue grew 7% year over year in the fiscal second quarter. 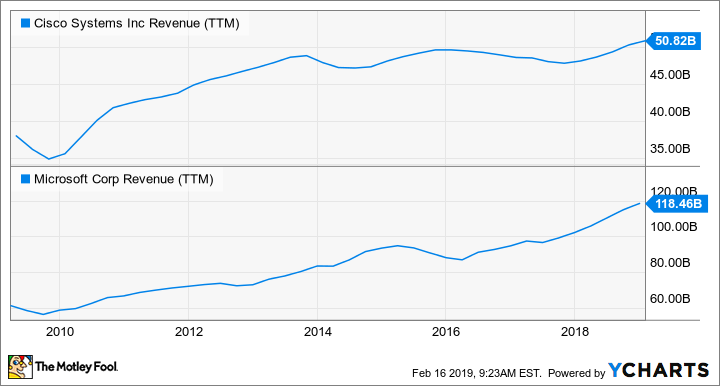 The networking giant should be able to maintain stable growth over the long term, as Cisco enjoys a competitive advantage from switching costs. It provides essential services and security features for enterprises, which makes it very unlikely a customer will ditch Cisco for an alternate provider. Additionally, Cisco is shifting more of its business over to a subscription-based model, which will enhance this competitive moat for the company going forward.

However, Cisco hasn't grown quite as fast as Microsoft lately. The software giant has experienced double-digit growth on the top line over the last year as it continues to benefit from booming cloud growth.

Like Cisco, Microsoft enjoys a competitive advantage based on switching costs. However, unlike Cisco, Microsoft also benefits from other advantages, such as network effects, providing services at low cost, and brand. Products such as Office, Windows, and Xbox all become more useful to customers the more others use those services. The network effects and switching costs of Office are evident in that customers are willing to pay an annual fee of $70 per year to use it while there are plenty of free or lower-cost options available from other providers, especially Alphabet's Google Docs, which is free to use. Microsoft's revenue from its Productivity and Business Processes segment (including Office software) grew 13%, year over year, in the last quarter.

Azure's robust growth is a result of the cost-effective cloud technology it provides companies around the world. Microsoft has quickly caught up in the cloud industry, surging to the second spot behind Amazon.com's Amazon Web Services (AWS) with 13% market share. The software giant couldn't have accomplished this feat unless it offered a competitive cloud solution at a competitive price.

Finally, Microsoft is ranked the No. 7 most valuable brand in the world, according to Brand Finance. Generally, all you need to find is one competitive advantage in a company to justify investing in the stock. Microsoft possesses all four major competitive advantages, including high switching costs, low-cost provider, network effects, and brand. This is rare, so I'm giving the nod to Microsoft on this one.

Cisco vs. Microsoft: Which Stock Is the Better Buy? @themotleyfool #stocks $MSFT $CSCO Next Article
Current