A rose by any other name may still smell as sweet, but Sprint (NYSE:S) says that AT&T (NYSE:T) marketing its 4G network as 5G actually smells fishy, and it's suing its rival for deceptive advertising.

AT&T updated certain Android phones to display a 5G E icon -- which stands for 5G Evolution -- where they used to say 4G, even though the technology behind the service is still 4G-based. It defends the marketing effort by saying it has upgraded all of its infrastructure to be ready for 5G, so it's letting customers know when they're in an area with these enhanced capabilities. The 5G Evolution service is now in 400 markets. 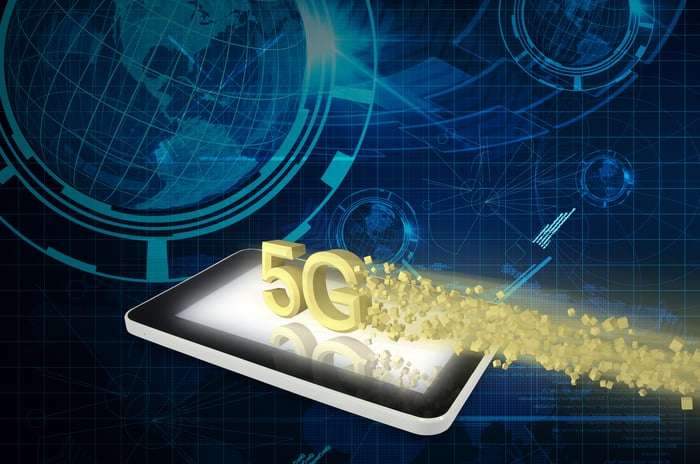 In an interview with tech site Tom's Guide, AT&T's senior vice president for wireless technology, Igal Elbaz, said: "All of our investment in the infrastructure and hardware is all 5G ready, so the moment the 5G software and the 5G devices show up, it's a software upgrade to our network to enable our customers to move to 5G. ... What we're trying to do is let them know that there is an enhanced experience in their market."

That, says Sprint, is deceptive. In a lawsuit filed this month with the U.S. District Court for the Southern District of New York, the carrier argues 5G E is really just AT&T's existing 4G LTE Advanced service, which its customers already have and which all four national carriers offer. The lawsuit says: "It harms consumers by holding out AT&T's services as more technologically advanced than Sprint's and enticing consumers to switch wireless service providers (or remain AT&T subscribers) under false pretenses."

Jargon, rather than a term of art

The problem is that "4G" and "5G" are not precise terms, but cover a collection of technologies and standards that carriers use to develop a network's next generation. 4G covers WiMax, LTE, Enhanced LTE, and HSPA+. When it comes, 5G -- true 5G -- will offer faster speeds, because it will use a higher-frequency band of the wireless spectrum called "millimeter wave." It's not here yet because standards have yet to be agreed on.

Because the wireless market is so saturated and carriers are looking for anything allowing them to stand out, they're willing to push the envelope in making claims that, if not dishonest, are at least muddying the perception of what's being offered.

Yet this is not the first time AT&T has played loose with the marketing of its wireless technology. Just before 4G was poised to become a reality, AT&T -- like T-Mobile US (NASDAQ:TMUS) -- slapped 4G branding on its phones and touted them as operating at "4G speed," even though what they were really using was 3G's then HSPA+ standard.

The United Nations agency that sets telecom standards for the world, the International Telecommunication Union, eventually permitted carriers to market their HSPA+ networks as 4G, after which the "speed" qualifier was dropped from carrier advertising.

AT&T's rivals aren't quite so sanguine this time about the carrier's efforts at making its network seem more than it really is. Verizon (NYSE:VZ) says it "won't take an old phone and just change the software to turn the 4 in the status bar into a 5. We will not call our 4G network a 5G network if customers don't experience a performance or capability upgrade that only 5G can deliver."

While Verizon also has a product it calls 5G Home, it's apparently built on technologies that will be available when 5G becomes a reality.

T-Mobile CEO John Legere was a bit more strident and called out AT&T on Twitter, saying what the carrier was doing "isn't just bad marketing ... it's a FLAT OUT LIE." T-Mobile also mocked its rival with a short video saying it didn't realize updating to 5G was so easy, and showed a phone with the LTE icon being covered with a piece of tape labeled "9G."

In its lawsuit, Sprint also said, "This technology is indisputably not 5G. Adding an 'E' or the word 'Evolution' to 5G does not mitigate the deception."

AT&T got away with labeling non-4G networks as 4G last time, which may have encouraged it to push the envelope again. This time, though, Sprint has taken legal umbrage at the tactic. It remains to be seen whether it will have success in smacking down its rival for giving the impression AT&T's network is something it's not.