Walmart (NYSE:WMT) has shown that embracing technology and an omnichannel model can deliver retail growth both digitally and in brick-and-mortar stores. The retailer, which has invested billions in integrating its online operation with its physical locations, saw its comparable-store sales grow by 4.2% in the United States in the fourth quarter, while its e-commerce sales jumped by 43%.

The numbers show that the chain can compete with Amazon (NASDAQ:AMZN) and that brick-and-mortar locations are a strong asset in that competition. In addition, the Q4 results validate CEO Doug McMillon's decision to empower digital boss Marc Lore to not just run the e-commerce side of the business, but to fully integrate digital and physical operations.

"Our stores and clubs are becoming more digital and we're using technology to change how we work," the CEO said during the Q4 earnings call, continuing:

More customers can now access our brand through multiple channels and it's important that we engage them in different ways. We've learned that those customers who shop with us, both in stores and online, spend about twice as much in total and they spend more in our stores. 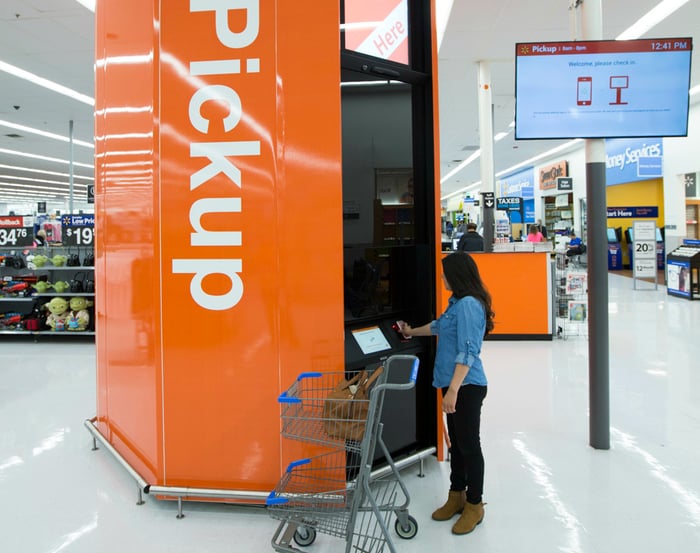 It's about embracing change

Lore joined Walmart after the retailer bought Jet.com in October 2016. At the time the $3.3 billion deal closed, it was met with considerable skepticism largely because Jet.com had not proved it could be anything but a money pit burning through cash.

Walmart, however, wasn't really buying Jet.com. It was buying Lore and his management team. McMillon didn't just keep Lore as head of Jet.com, he made him the digital boss for the entire company. Once in that position, Lore went to work breaking down barriers and fully integrating brick-and-mortar and digital operations.

This wasn't a small task. It meant changing mindsets in a mature operation. Lore had to get store management to think not just about gross inventory issues but fulfilling single orders. That took rebuilding supply chains, adjusting attitudes, and trying a lot of new ideas.

Not every idea has worked, but batting a thousand was never the point. Under McMillon, Lore and the chain's other leaders have been able to reinvent everything from in-store pickup to how customers shop for groceries.

"Across the business, you can see examples of how we're meeting the changing needs of customers and delivering solutions that are increasing customer engagement," McMillon said. "In the U.S. we offer grocery pickup at more than 2,100 locations and grocery delivery at nearly 800 locations, which represents about 69% and 36% of the population, respectively. Feedback from customers about these services continues to be very positive, which speaks of the capabilities of roughly 37,000 personal shoppers."

While Walmart has embraced change it has also maintained its focus on providing value. That's important in a market where Amazon remains its key competition but other rivals, including Costco, keep the pricing pressure on. McMillon made it clear that execution and investment will be key in keeping its prices low.

"Our previous investments in fulfillment centers and systems, plus our acquisitions are helping us drive strong sales, but we need to make more progress to improve profitability," he said. "Our fulfillment shipping costs were improving as we continue to enhance our assortment, repeat visits should increase and contribute to improved profitability."

While there's no magic formula for competing with Amazon and defying the so-called retail apocalypse, Walmart has shown that putting customers first is a key ingredient. The chain has driven sales by adding convenience and offering customers a true omnichannel model that's convenient.

Nearly every retailer says it works in the omnichannel space. Walmart has truly embraced that by testing and implementing innovations that enhance customer experience, blending the digital and the physical. That's a task that continues and Walmart has shown that it's committed to an ongoing effort to innovate and deliver the experience customers want (even if they don't quite know they want it).