The president is sending mixed signals about his position on marijuana. Here's what's probably going to happen.

In 2015, when running for president, Donald Trump was asked about Colorado's legalization of recreational marijuana. "I think it's bad," he said at the time, "and I feel strongly about it." However, he later modified his stance on marijuana, stating at a campaign rally that states should be allowed to legalize marijuana. And he has frequently expressed his support for the legalization of medical marijuana.

So far in his term, President Trump hasn't been very clear about his intentions regarding marijuana legalization. His recent signing of a federal spending bill raised the question of what he's really going to do about marijuana. 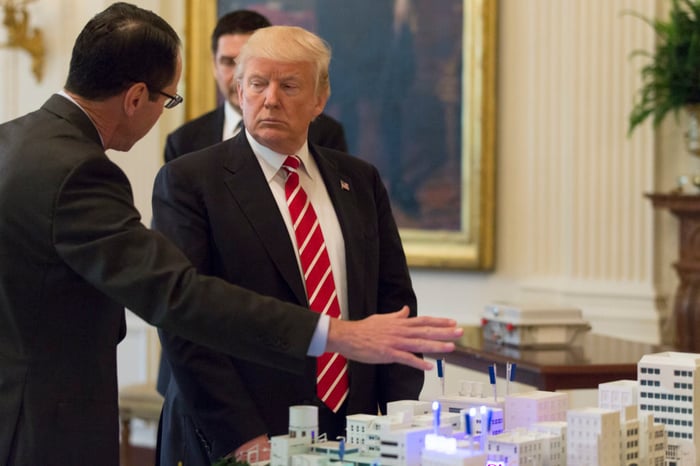 The spending bill Trump signed on Feb. 15 funds U.S. government operations through Sept. 30. And, like previous temporary spending bills, it included language that prevents the U.S. Department of Justice from using funds to interfere in states that have legalized medical marijuana. So the president is comfortable with keeping the DOJ out of the way, at least when it comes to medical marijuana, right? Not so fast.

In signing the bill, Trump highlighted the medical marijuana provision in the spending bill and stated that he "will treat this provision consistent with the President's constitutional responsibility to faithfully execute the laws of the United States." Marijuana in any form remains illegal at the federal level in the United States. Trump's additional statement appears to reserve the right to enforce those laws even though the spending bill expressly prohibits using authorized funds to do so.

Notably, Trump didn't use similar language when he signed the 2018 budget bill a year ago. At that time, Jeff Sessions was the U.S Attorney General. Only a few weeks earlier, Sessions had caused an uproar in the U.S. cannabis industry by issuing a memorandum that overturned Obama administration policies that had kept the DOJ from interfering in states that had legalized marijuana.

But under Sessions, the DOJ never took action against people or businesses that operated in states that had legalized marijuana. And Sessions is now gone, with his replacement, William Barr, agreeing to not interfere in states with legal marijuana markets despite his personal opposition to marijuana legalization.

What will Trump do?

The president has sent mixed signals in the past about marijuana and is still doing so. But what will he actually do?

During his nomination process, Barr testified before the Senate Judiciary Committee that he wouldn't target cannabis businesses that comply with individual states' marijuana laws, and he put that pledge in writing. Now that he's the Attorney General, it would be difficult for Barr to renege on his commitments. Trump's advisors know that.

Trump himself agreed to a deal with Sen. Cory Gardner (R.-Colo.) last year to prevent the federal government from challenging Colorado's marijuana laws. Gardner even said at the time that he had secured Trump's pledge to support "a federalism-based legislative solution to fix this states' rights issue once and for all."

Such a legislative solution is working its way through the U.S. Congress now. The Strengthening the Tenth Amendment Through Entrusting States (STATES) Act, sponsored by six Democrat senators and five Republican senators, including Gardner, is currently under Senate Judiciary Committee review. An identical bill has also been introduced in the U.S. House of Representatives, with 31 Democrat sponsors and 15 Republican sponsors.

With the 2020 presidential campaign beginning to heat up, marijuana legalization could become a key issue. Three senators who have already announced plans to run for president -- Sens. Elizabeth Warren (D.-Mass.), Corey Booker (D.-N.J.), and Amy Klobuchar (D.-Minn.) -- are sponsoring the STATES Act. Other current and potential Democratic presidential candidates have also expressed their support for marijuana legalization.

Multiple recent surveys have shown that a majority of Americans are in favor of marijuana legalization. Any presidential candidate, including Trump, would find opposition from a majority of voters on the issue if he or she came out against legalizing pot.

But the status quo will be shaken up sooner or later. The momentum for marijuana legalization is simply too great. And that means investors who place their bets on the right stocks could have huge winners on their hands in the not-too-distant future.

While there are several marijuana stocks that should soar if federal anti-marijuana laws change, I think two especially stand out -- Origin House (ORHOF) and Canopy Growth (CGC 6.59%).

Origin House is the leading cannabis distributor in California. The company also has been steadily building up its own portfolio of cannabis brands. Origin House stock trades at a discount to most Canadian marijuana stocks primarily because of U.S. federal laws. Should the STATES Act or similar legislation become law, I think shares of Origin House would skyrocket.

Canopy Growth is the world's biggest marijuana stock by market cap. The company announced plans to move into the U.S. hemp market following the recent U.S. legalization of hemp. Canopy would almost immediately jump into the U.S. marijuana market as well if federal laws changed. Its experience in Canadian and European marijuana markets would make Canopy a formidable player in the United States.