All of Noble Corporation's (NEBLQ) operating results point to a company that is turning around after a multiyear slump for offshore rigs. That is, until you look at its net income results. The company's revenue continues to increase, more of its drilling ships and rigs are obtaining work, but its bottom line remains negative.

For investors, this situation is hard to interpret. Is this a prelude to profitability or is the lack of earnings when so much of its fleet is already working a bad sign? Let's take a read of Noble's most recent earnings report to see what the numbers say and what that will likely mean for the stock this year and beyond.

This was the second quarter in a row where Noble posted higher revenue from the previous reporting period, which is an incredibly encouraging sign that we're going to start seeing a pickup in offshore drilling activity. The company reported that its utilization rate for the quarter was 75%, which was up from 58% this time last year. The reason that we didn't see higher revenue versus this time last year was that the average dayrate for its rigs has fallen considerably over the past year from $213,000 per day to $176,000. The precipitous fall was largely attributed to the end of older contracts that were replaced with newer ones at much lower rates.

Noble isn't the only one getting lower rates these days, so it isn't necessarily a sign of weakness. With the industry utilization rate at lower levels, customers have more of an upper hand when negotiating contract rates. This will likely be the case until we see an increased utilization rate across the industry. 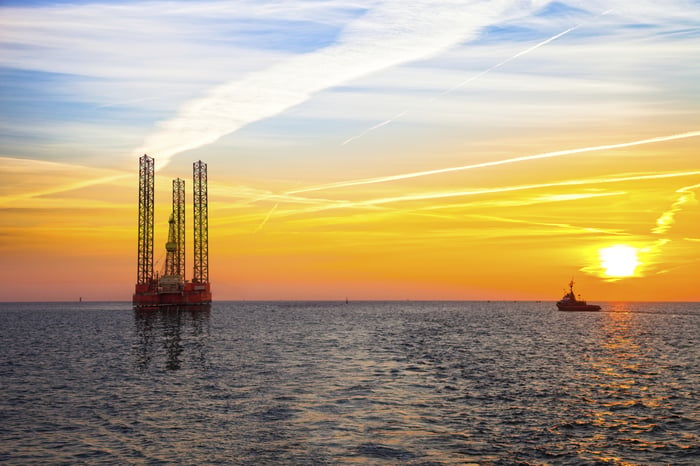 On the company's conference call, Robert Eifler, vice president for marketing, noted that some of its sales efforts slowed down toward the end of the year because of dropping oil prices. He noted, though, that the company remains optimistic:

[W]e have seen some cancellations and delays in 2019 well programs, primarily in the floating sector. However, it's our belief that while these changes will have some negative effects, they won't be significant, especially in relation to our own fleet marketing efforts. In fact, jack-up contracting activity is continuing at a very strong pace, and floater activity remains active as evidenced by the numerous tenders outstanding to fill floating-rig needs across the globe. Noble's experience has also been encouraging with contract days added in January for our floating-rig fleet and important opportunities emerging for our jack-ups.

... We believe our industry remains in early stages of recovery, and any adverse impact stemming from the late 2018 crude-oil price volatility should prove to be short term in nature.

One of the reasons Eifler noted that Noble was able to weather the storm of weaker prices and smaller firms backing away from committing to drilling programs was because most of its fleet is marketed to larger companies. Its most recent contract for a newly constructed jack-up rig went to Saudi Aramco.

You can read a full transcript of Noble's conference call here.

Getting back to work doesn't necessarily mean turning a profit

The good news is that Noble's results aren't likely to get any worse. The earnings reports coming out from offshore companies show that demand is on the upswing, and the market will start to become more lucrative for these players. The bad news is that investors won't likely reap the benefits until the next round of contracts when Noble can command a higher rate for its services. Until then, shareholders can likely expect 2019 to be a lot more of what we have seen over the past couple of years.