Two giants of audio entertainment square off in a battle of the band brands. The disrupted may wind up being the disruptor.

The disruptor doesn't always win over the disrupted. Critics have been knocking Sirius XM Holdings (SIRI -1.02%) for years, calling the premium satellite-radio platform a transitory technology. Bears argue that folks paying for satellite radio now will eventually figure out that smartphones seamlessly paired up with their connected cars will deliver a wider realm of high-end audio entertainment for a lot less than their monthly Sirius XM ransoms.

Europe-based Spotify Technology (SPOT -3.36%) is the world's leading streaming-music provider. It closed out 2018 with 207 million monthly active users worldwide. A hearty 30% of its monthly active users -- and presumably a larger percentage of its 96 million premium accounts -- are in North America. In short, Spotify's base of paying users has quickly caught up to Sirius XM's 34 million subscribers. Spotify is growing its reach faster than Sirius XM and commands the larger global audience, but that doesn't make it the better next-gen radio stock. 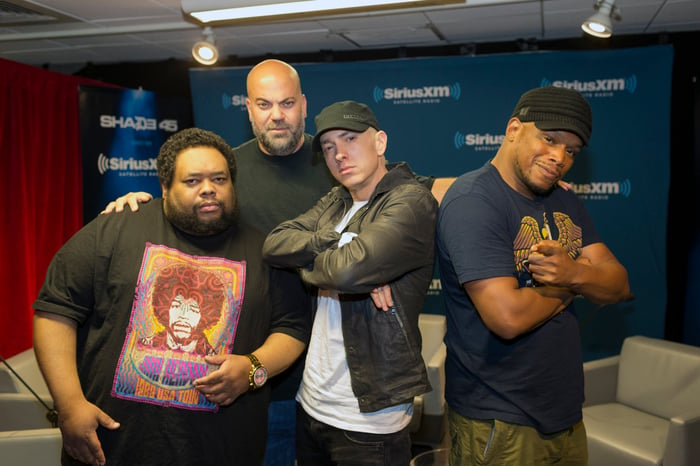 There's distortion in the volume

There are several differences between Spotify and Sirius XM. We already established that Spotify is growing faster, and it's not even close. Spotify's revenue soared 29% last year. Sirius XM mustered a mere 6% top-line advance.

But there are a few notable feathers in Sirius XM's cap. It's profitable, for starters. Sirius XM has consistently been in the black since 2010. Spotify is taking steps toward profitability, but Wall Street doesn't see it posting an annual profit until 2021 at the earliest.

Sirius XM is also a proven commodity with investors. The stock has delivered positive returns in each of the past 10 years. Spotify is trading marginally higher than when it went public nearly a year ago.

There's also an underrated moat here. Sirius XM remains the only radio service offering coast-to-coast coverage. There is no other radio company with satellites in space to provide that kind of coverage. Streaming services are at the mercy of nearby cell towers for connectivity. Tap into your phone's app marketplace and you will find hundreds (if not thousands) of streaming audio platforms -- including Sirius XM's recently acquired Pandora Media -- competing against Spotify.

Another key difference is that Sirius XM is milking more and more out of its users over the years. It's getting better at commanding higher ad rates for its commercial-padded channels, and it's also been able to pass off escalating music licensing costs to subscribers as a fee on top of their monthly rates. Spotify, on the other hand, is seeing average revenue per user decline as it pushes discounted subscriptions and enters new countries at lower price points.

As for the similarities, the two media powerhouses are pretty close on the top line. Spotify's $6 billion in trailing revenue is just above the $5.8 billion that Sirius XM delivered in 2018. Sirius XM should come out slightly ahead in 2019 as a result of the Pandora acquisition, but the year is still young.

Both companies are positioned well. Growth may be slowing at Sirius XM, but the fact that it has posted steady sequential increases in subscribers -- even as Spotify and other streaming services have rolled out -- shows that the market is expanding. One player doesn't have to grow at the expense of the other.

The better bet of the two remains Sirius XM. It's profitable. It faces fewer competitive challenges. It's a proven winner. And now with Pandora at its side, it has more streaming ammo than its own namesake online offering. Investors should be pumping up the volume when it comes to next-gen radio stocks. Spotify should fare well as an early global force, but Sirius XM should fare even better as an investment.