One metric tells the story of a company with a widening moat.

The pharmaceutical industry has a runaway winner when it comes to providing cloud services: Veeva Systems (VEEV 0.01%). The company reported earnings for the fourth quarter of 2018 on Tuesday and results were more of the same: double-digit growth in revenue with impressive leverage in earnings.

But as exciting as this progress is, another metric really showed the power of the competitive moat the company is building. 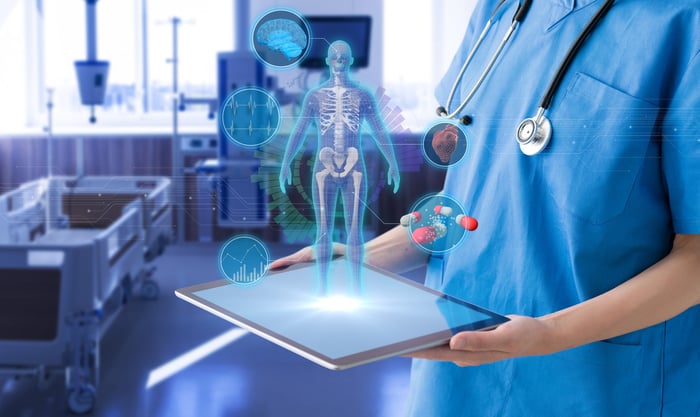 Before we take a look at that impressive number, let's check in on how Veeva performed on the headline figures.

When revenue grows by 25%, that's great. When that revenue growth is leveraged into an 88% gain in earnings, that's incredible.

Veeva was able to accomplish this because of two things. First, gross margins on the company's subscription revenue widened by 380 basis points, to 85.2%. Think about that for a minute: It only costs Veeva about $0.15 to provide the cloud-based infrastructure for every $1.00 in subscription revenue.

Secondly, increased spending in research and development (15% increase) and sales and marketing (12% increase) were dwarfed by the revenue growth of 25%. Adding those factors together produces almost 90% EPS growth -- backing out stock-based compensation.

The figure that really matters

Veeva's most impressive number: Revenue retention rate for the fiscal year was 122%. Chief Financial Officer Tim Cabral said, "I'm particularly proud of this metric as it demonstrates our customers' willingness to invest more with Veeva over time based on the success that they've had with our products and our people."

Here's what that means in plain English. At the end of last year, 760 companies used at least one of Veeva's two solutions: Veeva Commercial Cloud or Veeva Vault. For the sake of easy math, let's say those 760 clients brought in a total of $100 million in subscription revenue during 2017. Well, not only did most of those 760 customers stay with Veeva throughout the year, they even added more cloud-based tools over time, spending $122 million on subscriptions in 2018 (Remember, these spending numbers are hypothetical.)

What tools were these customers buying? As Veeva Vault has grown, its offerings have become an alphabet soup of options with seven different categories of services across its platform: Commercial, medical, safety, regulatory, quality, clinical operations, and clinical data management. And within each category are sub-categories with different tools. Basically, anything a drug company might need to bring a compound from the idea stage, through clinical trials, and to the market is available via Vault.

Management said that electronic trial master files (eTMFs) were adopted by two top 20 global pharmaceutical companies and one top 7 clinical-research organization. Vault clinical trial master systems (CTMS) doubled its number of clients to 34 by the end of the year. The company also went live with the first two customers of Veeva Nitro -- the company's data-warehouse solution.

Why does all of this matter? There are two reasons. First, it doesn't cost nearly as much to upsell these products to existing customers -- they are already in the Veeva ecosystem. That means more subscription dollars flow right to the bottom line.

More importantly, however, is the fact that it widens the moat -- or sustainable competitive advantage -- around the company.

As a drug company uses more and more of Veeva's products to complete all the daily tasks that are done on a computer, the higher the switching costs become to leave Veeva. Who would pay to migrate all that data and retrain their workforce, and risk losing mission-critical information, if they didn't have to? With each new tool a customer adds, the switching costs only get higher. That puts Veeva -- and its shareholders -- in an envious position.

Here's management's outlook for the first quarter of 2019 and the fiscal year on a non-GAAP basis:

If the company hits its revenue targets in the first quarter and full year, it would represent growth of 22% and 19%, respectively. If it hits its earnings targets, it would signify 33% and 18% respective growth.

The company ended the year with $1.1 billion in cash and investments on the balance sheet and no long-term debt. It also produced $301 million in free cash flow for the year -- meaning it's in very good shape for the year, and years, ahead.