This European company has pulled ahead in the global semiconductor equipment market. Should you put it on your buy list?

Semiconductor and memory stocks, as well as the equipment makers that provide them with advanced tools, have been some of the best-performing stocks since the beginning of the year. However, that may be because they fell the most last fall, with most still below the highs set back in the early part of 2018.

In fact, most companies across the semiconductor space are predicting declines in both revenue and earnings this year. Cautious demand from end customers is filtering down to bare-bones purchases of memory and semiconductors, and these companies are thus pulling back on equipment purchases.

However, despite near-term industry headwinds, one semiconductor equipment company is actually predicting growth in the coming year: ASML Holding N.V. (ASML 1.21%). How is this company from the Netherlands outperforming its semi-equipment peers? 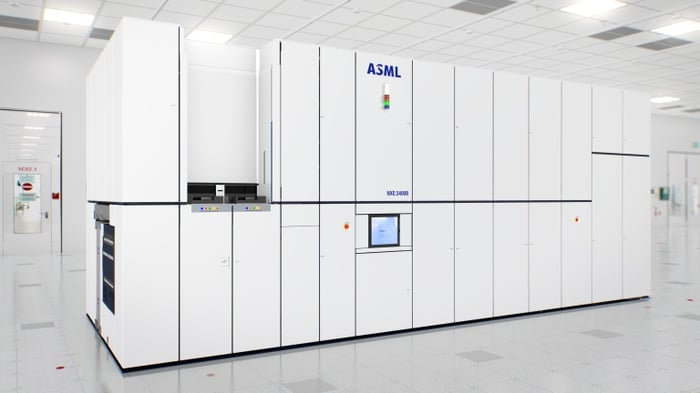 ASML makes many of the types of machines used in the memory and semiconductor manufacturing process. Its machines include:

It also provides services for the installed base of machines.

Roughly 70% of ASML sales came from its various DUV machine offerings. But as we'll see, it's really the EUV sales -- which made up only 24% of sales in Q4 -- that will power ASML to its unique growth this year and beyond.

ASML recently reported its full-year 2018 quarter results, and they were impressive. Revenue grew a strong 22.1% over the prior year, with earnings per share up an even greater 26.8%, on the backs of both expanding gross margin and significant buybacks.

While most equipment makers are forecasting declines in 2019, ASML management is forecasting "another sales growth year in 2019." Growth will be centered on the foundry and logic segments, and especially EUV machines, which enable production of today's leading-node chips.

Of note: ASML is the sole provider of EUV technology.

You heard that right. This new technology, which enables a breakthrough in production of next-generation chips, is the sole property of ASML. Even more exciting? EUV use is only just starting to be used in commercial mass production.

Why is ASML the sole provider of EUV? For one thing, the technology is extremely difficult to get right. EUV has been under development for over 20 years and has been hugely expensive, and there was no certainty it would ever work. But just in time for 7 nm chip production, which greatly benefits from EUV, the technology finally became cost-effective for commercial use.

Traditional DUV tools use 193 nm light to etch patterns onto photosensitive silicon wafers, but 193 nm is quite large compared with the tiny transistors on today's leading-edge chips. Producers have gotten around this by running chips through many, many rounds of lithography tools, doing a tiny bit at a time.

EUV, however, uses 13.5 nm light to etch even tinier patterns on wafers. This EUV production can thus cut out many DUV lithography steps, potentially reducing DUV steps in certain parts of the process by 67% to 75%.

How much savings does this yield for semiconductor manufacturers? Well, new EUV machines currently go for over $125 million a pop -- not bad for 20 years' research and development.

The combined effect of the semiconductor downturn and adoption of EUV means that ASML should continue to grow even while its DUV competitors, including Lam Research (LRCX 0.93%) and Applied Materials (AMAT 0.92%), encounter headwinds -- not only from the semi downturn, but also from reduced shipments of DUV tools.

This is also why ASML has a price-to-earnings multiple that's more than twice those of its DUV-focused competitors: 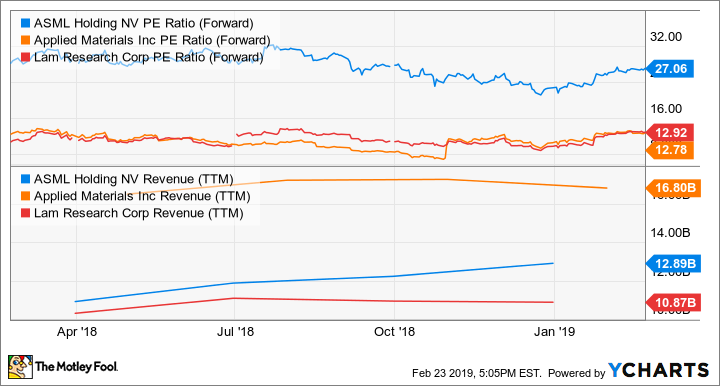 Is ASML overly expensive? Well, it depends. After selling 11 EUV tools in 2017 for early production, and 18 machines in 2018, management expects to sell 30 EUV tools in 2019, powering its overall growth.

If EUV continues to take off not only for leading-edge chips, but also some types of memory production -- currently in a test phase -- ASML's run could just be getting started.