The bottom line: Epidiolex is on a roll.

GW Pharmaceuticals ( GWPH ) provided what was arguably the most important quarterly update in the company's history after the market closed on Tuesday. And the biotech knocked the ball out of the park. 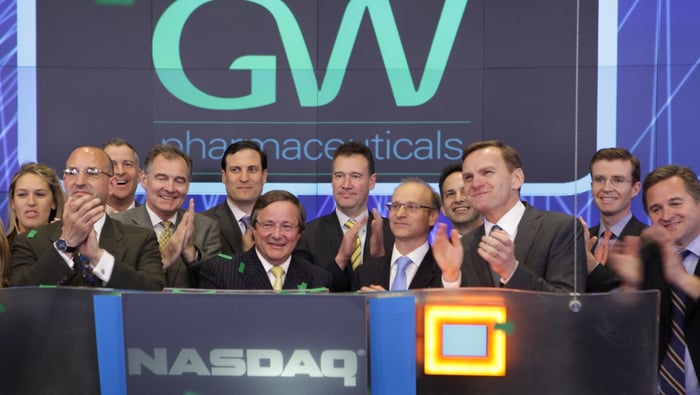 A fantastic U.S. launch for Epidiolex

There were three primary reasons why Epidiolex performed so well. One is simply that there remains a significant unmet medical need in the two indications for which the drug was approved by the FDA: Dravet syndrome and Lennox-Gastaut syndrome (LGS). Epidiolex was the first drug ever approved by the FDA for Dravet syndrome, while current therapies aren't effective over the long run for many LGS patients.

Another key factor behind Epidiolex's Q4 success was that GW Pharmaceuticals did a great job in reaching out to physicians. GW Pharmaceuticals CEO Justin Gover stated at the J.P. Morgan Healthcare Conference in early January that his sales team had interacted with around 70% of the 5,000 targeted physicians, including all Level 3 and Level 4 epilepsy centers.

Perhaps even more important, GW Pharmaceuticals laid the groundwork for payers to provide coverage for Epidiolex. The company reported that around 145 million individuals with commercial insurance now have a coverage determination for the drug, representing over 80% of all Americans with private health insurance. In addition, Epidiolex is covered for 99% of state fee-for-service Medicaid members and around 90% of Managed Medicaid members.

An even better Q1

As good as the fourth quarter was for GW Pharmaceuticals, the first quarter of 2019 is likely to be much better. Epidiolex revenue is virtually guaranteed to be higher in Q1 for one simple reason: It will include a full quarter of sales. The drug's U.S. launch kicked off on Nov. 1, 2018, so the fourth quarter only included two full months of sales.

GW Pharmaceuticals' president of North America, Julian Gangolli, said in the company's Q4 conference call that many states didn't announce their Medicaid coverage determinations until January. He added that this resulted in "another bolus of Medicaid prescriptions to get filled in January."

There could also be a word-of-mouth benefit as early adopting physicians and patients spread the word about Epidiolex. Gangolli said that his team has been "heartened by the number of spontaneous reports that we have received both from physicians and caregivers as to the meaningful difference Epidiolex is making in patients' lives and the reduction in seizures that these particular patients are experiencing."

And GW's efforts to reach more physicians and convince more payers to cover Epidiolex will continue as well. The combination of all of these factors points to increasing momentum for the drug in Q1.

The story should get even better for GW Pharmaceuticals looking farther into the future. The biotech expects a recommendation for Epidiolex from the European Medicines Agency's Committee for Medicinal Products for Human Use (CHMP) in the second quarter of 2019. GW is already preparing for launching the drug in five initial major European markets.

Results from a phase 3 trial evaluating Epidiolex in tuberous sclerosis complex (TSC) are expected in Q2. If all goes well, GW Pharmaceuticals could file for FDA approval of the indication in the fourth quarter of this year. In addition, the company anticipates beginning a phase 3 study of Epidiolex in treating Rett syndrome in the second quarter.

There's still a long way to go for Epidiolex to become the blockbuster drug that many expect it will be. But GW Pharmaceuticals is definitely off to a good start.