Reports have surfaced that China-based contract chip manufacturer Semiconductor Manufacturing International Corporation (SMI) plans to go into production on its 14-nanometer (nm) technology at some point in the first half of 2019. Manufacturing technologies designated by smaller nanometer numbers tend to be more area- and power-efficient than technologies designated by larger numbers. 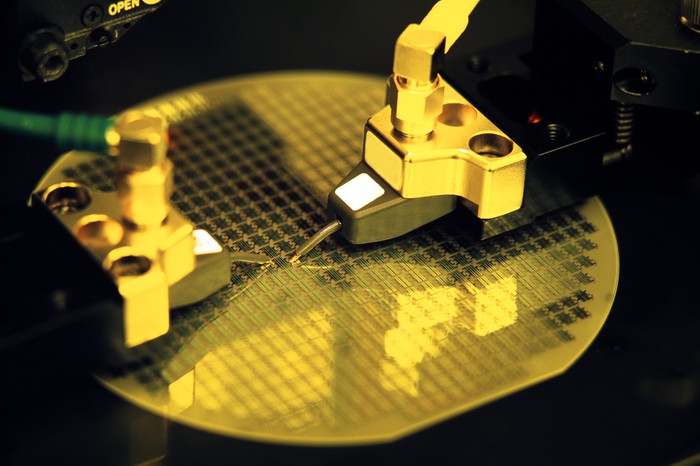 With SMIC now set to go into production on its 14nm technology, TSMC investors might be worried that additional competition at 14/16nm-class technologies could be a significant negative for TSMC, which generated 23% of its revenue from 16nm/20nm technologies (this includes 12nm, too) in 2018.

Here's why this isn't as big a deal as some might think.

Both TSMC and SMIC are contract chip manufacturers that need to compete to win manufacturing contracts from companies that design -- but don't manufacture -- their own chips, also known as "fabless" semiconductor companies.

There are a number of factors involved when a fabless company chooses a contract manufacturer, but ultimately fabless companies are going to want the best product performance at the lowest cost.

In this case, TSMC has two crucial advantages over SMIC. The first is that because TSMC has been manufacturing 16nm-class technologies for about four years, the company should be a master of building those chips. What that means is that TSMC's yield rates -- that is, the percentage of the chips manufactured that are salable -- should be extremely high. For SMIC, 14nm is a brand-new technology, and it's very likely that the company still isn't enjoying yield rates anywhere close to what TSMC does.

TSMC has successfully defended itself in the past

TSMC investors should also keep in mind that the contract chip-manufacturing giant has successfully defended its business against the likes of SMIC at older technology generations. For example, although SMIC is currently mass-producing chips on its 28nm technology, TSMC's business at 28nm is still robust, making up 20% of the company's revenue in 2018.

SMIC's 28nm revenue in 2018 was, at best, a rounding error compared with TSMC's. My guess is that the situation will be no different for TSMC's 16nm-class technologies even once SMIC's 14nm technology is in full production.

Put simply, TSMC shareholders don't have much to fear from the latest news around SMIC's 14nm technology.

Taiwan Semiconductor Manufacturing Is Off to a Hot Start in 2023, but Is It Too Early to Celebrate?
409%