Looking at the most popular marijuana stocks in the market, you'd think that Canada was the only place to be. That stance makes sense, given that from the Arctic towns of Inuvik and Iqaluit to key cities like Vancouver, Toronto, Montreal, and Halifax, recreational cannabis is now legal to sell and to purchase.

Yet the U.S. marijuana market is already bigger than many realize, and despite the legal impediments at the federal level, some companies have tapped into the opportunity to sell cannabis in areas where state law permits it. One of the biggest players in that budding market is MedMen Enterprises (MMNFF -1.56%), and the Culver City-based company is already tapping into some of the most promising markets in the U.S. -- including its home state of California. 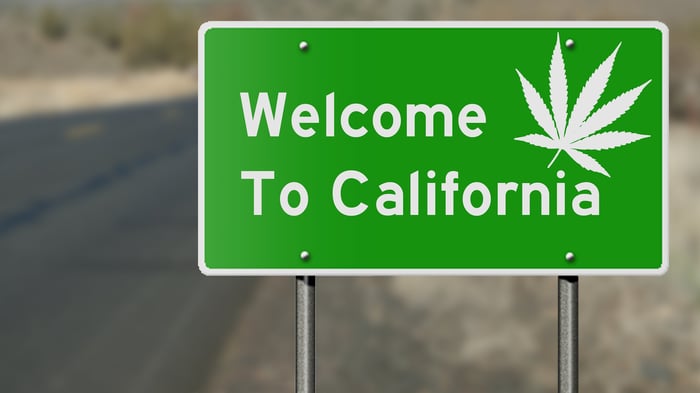 How MedMen is finding growth in U.S. cannabis

MedMen recently released its fiscal second-quarter financial report, and the news showed just how successful the cannabis company has been in finding opportunities within key U.S. markets. The company said that revenue rose 39% over the past three months to $29.9 million. Most of those sales came from the eight retail locations that MedMen has in California, which generated $23.7 million on the top line. That figure was 28% higher than in the fiscal first quarter.

California has plenty of opportunities for MedMen, and the company's aiming to capitalize on them. MedMen moved into Northern California during the quarter by acquiring licenses in the Bay Area cities of San Jose and Emeryville. Elsewhere in the state, MedMen signed an agreement to acquire a retail store in Santa Ana that had already carried the MedMen brand under a management contract. With these transactions having closed during or subsequent to the end of the fiscal second quarter, the company should see their full impact during the rest of calendar 2019.

That said, MedMen is looking well beyond the Golden State for business expansion. The company currently has 16 retail stores, including locations in Arizona, Nevada, New York, and Illinois. Moreover, MedMen is now looking at opening 16 more locations in calendar 2019. That includes dramatically boosting its presence in the Florida market, going beyond its current delivery service to open stores in Miami, Orlando, West Palm Beach, St. Petersburg, and Key West.

MedMen's biggest growth effort came in October, when it announced plans to purchase privately held PharmaCann for $682 million. PharmaCann brought valuable assets to the table, including eight cultivation facilities and 18 retail licenses, helping add six new states to MedMen's footprint. That'll bring cultivation space up to more than 800,000 square feet, as well as opening up the Michigan marijuana market, which recently joined the list of legal U.S. jurisdictions. It'll take time for the deal to close, but eventually, it'll be a game changer for MedMen.

Yet the problem for MedMen shareholders is that all of these growth-directed strategies will be expensive for the foreseeable future. In the fiscal second quarter, MedMen's losses widened to $18.7 million, working out to $0.25 per share. That's not likely to change soon, given all the costs of opening new retail locations, going through regulatory and licensing procedures, and expanding growth operations.

Moreover, access to capital could become more of a challenge to MedMen. The company acquired PharmaCann in an all-stock deal, keeping it from having to raise debt but diluting existing shareholders. But MedMen isn't debt-free, with about $96 million in notes payable on its balance sheet, and that number could rise in the future depending on how the cannabis company seeks to finance its growth plans.

CEO Adam Bierman is excited about the company's prospects. "We are in a new phase of growth," Bierman said, "one focused on continuing to operationalize our industry-leading retail footprint and increasing our profitability." With 7% market share in California and all of its plans to spread its stores across the nation, MedMen is proving that cannabis products -- and marijuana stocks -- aren't just for Canadians.