The e-commerce giant is looking to take a bigger piece of the large U.S. grocery market.

Amazon (AMZN 3.66%) is opening up another front in the grocery wars.

Less than two years after the ever-ambitious company sent shock waves through the U.S. grocery industry by taking over Whole Foods Market, Amazon now has designs on building its own supermarket empire from scratch.

According to The Wall Street Journal, Amazon has taken significant steps toward opening its own grocery stores, including signing leases and starting discussions with shopping centers in cities across the country. The company plans to open a store in Los Angeles before the end of 2019 and is preparing to open two more stores early next year. The e-commerce giant is also considering acquiring several regional grocery chains to boost its expansion ambitions, according to the report.

Considering that the company is also adding new Whole Foods locations, the news that it's launching a separate brand may seem surprising, but there are a number of reasons why the move makes sense. 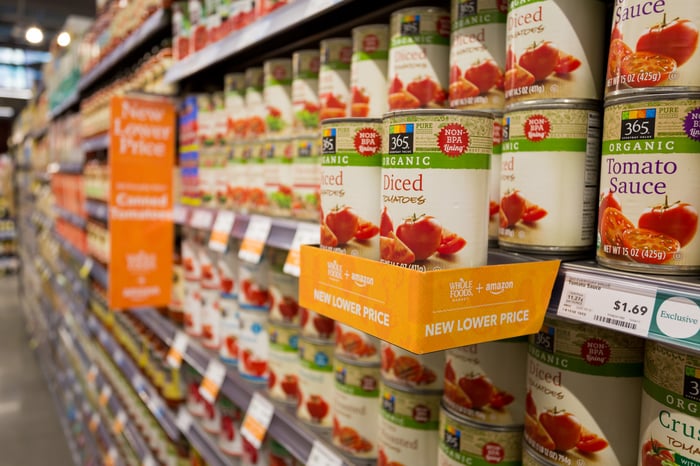 Long derided by critics as "Whole Paycheck," Whole Foods suffers from the impression that its products are expensive. That image seemed to improve, at least temporarily, once Amazon took over, but Whole Foods just isn't designed to compete on price with conventional supermarket titans like Walmart, Kroger, and Costco.

Although Whole Foods' brand is well known, it is a relative bit player in groceries with around $15 billion in annual revenue. Compare that to U.S. grocery revenue of more than $100 billion at Kroger and around $200 billion at Walmart, including the company's Sam's Club stores.

Amazon knows that in order to claim a larger piece of the grocery market, it needs to capture more of the budget-minded consumers who flock to Walmart, Kroger, and Costco. The way to do that? Start competing with lower prices.

Despite sharing a higher-end customer base, Amazon and Whole Foods are culturally at odds in some ways. Throughout its history, Amazon has sought expansion and growth at all costs, essentially viewing no business or product as off-limits. Whole Foods, on the other hand, has succeeded in part because it has restricted its product assortment to focus on organic and natural foods, banning ingredients like high fructose corn syrup and artificial preservatives.

Whole Foods' mission-driven strategy has built trust with its customer base -- shoppers who want to know what they're putting into their bodies -- but it has created some friction with Amazon, whose own business thrives on vast selection. At one point, the companies quarreled over stocking products like Coca-Cola, which Amazon knows its customers demand. But Whole Foods resisted and still doesn't sell the soda brand. Opening its own grocery stores would give Amazon an outlet to sell such high-demand products while catering to a wider range of shoppers.

Amazon set its sights on the industry way back in 2007 when it launched its grocery delivery service, AmazonFresh. That effort led to its acquisition of Whole Foods, and with it, Amazon didn't just gain nearly 500 supermarkets and a strong brand. The company also picked up a treasure trove of data on the grocery industry as well as a team of executives who have spent decades learning the inner workings of the market.

There are applications for that data beyond how it applies to the Whole Foods brand, and Amazon launching its own supermarket chain allows it to leverage that knowledge base. It also allows Amazon to potentially accumulate more information about the habits of a larger segment of grocery shoppers. The new grocery chain isn't Amazon's only experiment in the food biz. It's also been focused on expanding its no-cashier convenience store concept, Amazon Go, and it could employ similar "Just Walk Out" technology, based on a network of cameras and sensors, in this new wave of grocery stores.

At this point, relatively little is known about the new stores, including what their name might be. But with Amazon's history of disrupting new industries, it's not a surprise to see the company trying to tackle the $660 billion U.S. grocery store market from multiple angles.

Not unexpectedly, shares of supermarket operators, including Walmart, Kroger, and Costco, all dropped when the news of Amazon's latest endeavor broke.