Fitness-wearables company Fitbit (NYSE:FIT) unveiled four new devices on Wednesday. The new products reveal more about the company's evolving strategy to win customers with lower prices and build a base of active users. The company's new Versa Lite Edition, in particular, is a perfect example of Fitbit's approach. It's not only aimed at the fastest-growing subset of fitness-wearables product types -- smartwatches -- but it's the company's most aggressively priced smartwatch yet.

Coming in strong on price with its Versa Lite, Fitbit is doubling down on the aspect of its value proposition that can help it stand out in a market dominated by Apple (NASDAQ:AAPL), giving it a solid shot at market-share gains in the coming years. 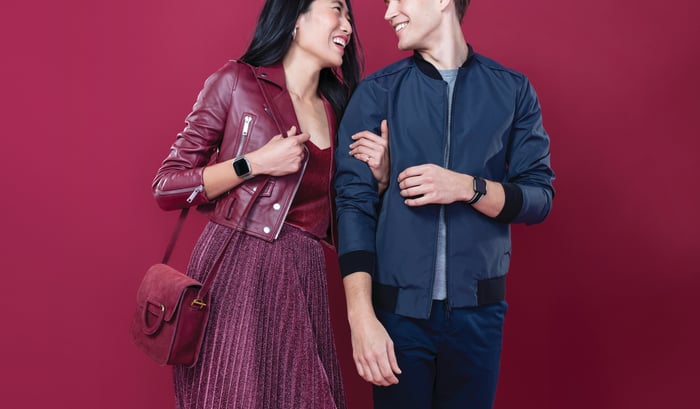 Fitbit announced four new products on Wednesday: a more basic version of its Versa smartwatch called the Versa Lite Edition, the Inspire and Inspire HR (fitness tracker devices that were previously only available through some healthcare and employer plans), and a new kids fitness tracker called the Ace 2.

While the Versa Lite Edition has the highest price tag of these new devices, it's arguably the most aggressively priced relative to its value, as it's the only one with a smartwatch form factor. The Versa Lite is simplified with one button instead of the three buttons other Versa devices have. In addition, it excludes some features that are on the rest of the Versa lineup, including Wi-Fi, music storage, and more. But the Versa Lite's more basic features enable Fitbit to sell the device for just $159.95 -- $40 less than its standard Versa model and significantly less than the Apple Watch Series 4 ($399) and Series 3 ($279).

A lower starting price for Fitbit's Versa smartwatch lineup importantly strengthens the company's value proposition against Apple. Fortunately, Fitbit's lower prices have already been gaining market share. The company's share of the global smartwatch market increased from 4.3% to 12.7% between the fourth quarter of 2017 and the fourth quarter of 2018, according to recent research by Strategy Analytics. Over this same time frame, Apple's global share of the smartwatch market declined from 67.2% to 50.7%.

It's about more than unit shipments

It's becoming increasingly clear that unit sales growth, driven by aggressively priced products, is central to Fitbit's business plan. But investors shouldn't forget the other half of the plan, which is arguably even more important. The company wants to grow active users through unit sales growth and then monetize those users with services.

"We will continue to build on the Fitbit platform to provide a more personalized and valuable experience for our users through a paid premium service expected to launch later this year," said Fitbit CEO James Park in the company's press release on Wednesday.