The rumor mill went into high gear last week with news that Amazon.com (NASDAQ:AMZN) is planning a major new push into the grocery arena. According to The Wall Street Journal, it's opening an entirely new chain in the U.S. -- unrelated to Whole Foods Market -- beginning later this year.

It's easy to wonder why the company would make such a move. With an existing base of Whole Foods Market locations and significantly lower overhead costs in the digital realm, it might seem counterintuitive that Amazon would continue to expand its brick-and-mortar operations. 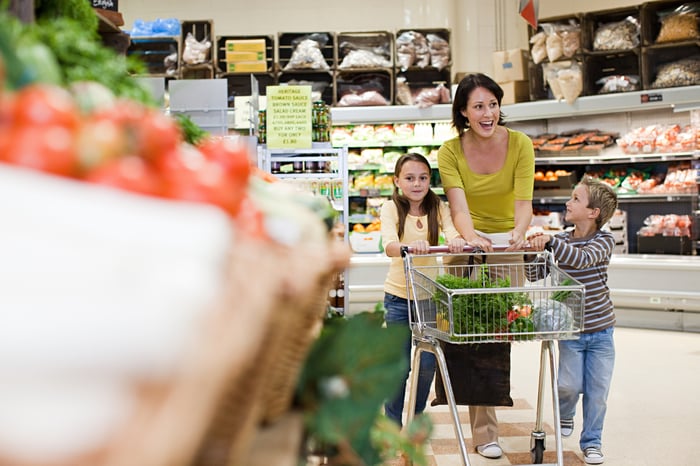 With massive sales of $232 billion last year, it may be difficult to think of Amazon in terms of slowing sales, but that's exactly what's happening. Net sales increased 20% year over year in the fourth quarter -- during its busy holiday season -- its slowest growth pace since producing 15% in the first quarter 2015.

There are a number of reasons for Amazon's decelerating growth. The first is the sheer magnitude of of the company's existing sales base. With more than $60 billion in sales last quarter, as Amazon continues to grow, it's simply more difficult to maintain the higher growth rates investors have become accustomed to. Additionally, with companies like Walmart and Target ramping up their online and omni-channel options, shoppers have more options now than when Amazon was the best (or only) e-commerce game in town.

Amazon is hoping that expansion in the grocery arena will compensate for the slowing growth the company is experiencing in its e-commerce operations.

With all the publicity about Amazon's impact on the grocery market, it's easy to forget that the company is currently still a small player in a massive industry. Overall, the U.S. grocery market represents an $830 billion opportunity, but Amazon only generated an estimated $10 billion of online consumable sales in 2018, according to a report by Edge by Ascential.

Though that total doesn't include sales from Whole Foods Market, which Amazon doesn't break out, the natural grocer accounts for most of the company's physical store sales, which totaled $17 billion last year.  With total estimated grocery sales of $27 billion last year, Amazon captured just 3% of the total U.S. grocery market, leaving a large, untapped opportunity.

Amazon is the world's largest e-commerce seller, but there are a number of reasons the company has a vested interest in expanding its brick-and-mortar operations. The ability to decrease the distance from its warehouse, fulfillment center, or brick-and-mortar store to the customer has been a crucial part of Amazon's overall strategy -- known as "the last mile" -- particularly where grocery purchases are concerned. By expanding its roster of physical locations, Amazon gains the ability to offer same-day delivery and one-day pickup in a greater number of markets. This may be key to increasing the adoption of online grocery shopping.

Then, of course, there's the much more obvious reason for increasing the number of physical stores: A large segment of the population likely won't give up its weekly pilgrimage to the grocery store. Providing customers an option to shop for groceries in an Amazon store may be the last, best way to engage them.