Sierra Wireless (NASDAQ:SWIR) was once one of the hotter names in the Internet of Things space, but the stock has fallen on hard times recently. While the S&P index is up about 9.8% for the year, Sierra Wireless is down 6.1% for 2019 and 24% over the past one-year period. 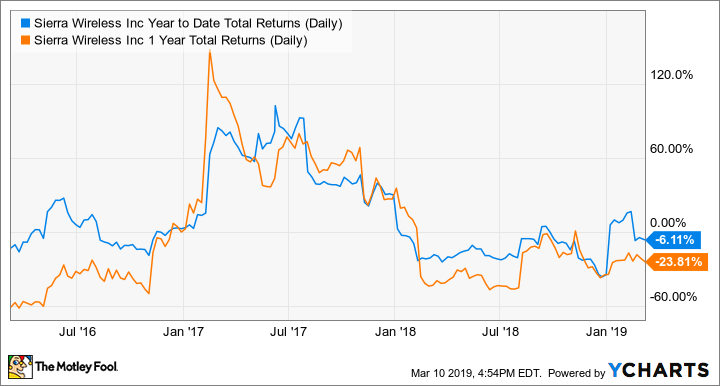 The company has been caught up in the economic slowdown brought on by the U.S.-China trade war, compounded by some managerial missteps. But after the recent swoon, should bargain hunters be dialing up Sierra?

It's no secret that much of the technology hardware industry is in a downturn -- it's coming off a large investment cycle over the prior two years, and also suffering under the cloud of the U.S.-China trade war.

In particular, Sierra's significant exposure to the automobile industry is currently problematic, as that sector has slowed meaningfully in both China and Europe. Sierra has also missed the mark in its PC and networking business, where it has lost market share to competitors. CEO Kent Thexton explained on the recent call with analysts:

Before taking over as CEO, certain product investment decisions were made that favored investing in automotive to the detriment of some requirements of our mobile computing and networking customers. Consequently, while we are enjoying success in the automotive segment, we expect our market share to decline in mobile computing until the next cycle of 5G design wins.

Adding fuel to the fire, tariffs on Chinese-made goods also caused Sierra to move some production from China to Vietnam. That cost the company $1.1 million in Q4, and will $300,000 or so in the current quarter.

Sierra does, however, have brand new leadership in CEO Kent Thexton, who just took the reins in October 2018. And he's embarking on an involved turnaround plan. 2019 will be a transition year -- Sierra will implement a cost-cutting plan aiming to take $40-$50 million out of the business to reinvest into its next wave of products, in two specific areas: LPWA modules (low-power wide area network) and 5G equipment.

5G modules will replace Sierra's current 3G and 4G modules in PCs, automobiles, and networking equipment. More interesting -- and potentially more profitable -- will be the LPWA venture. LPWA are sensors that are attached to machines and other equipment that feed data back to a cloud-based management system. The proper installation of these sensors can save customers big time on maintenance costs, and these modules are just beginning to be widely deployed. Not only that, but the implementation of sensors with the company's software solutions will lead to recurring revenue for Sierra, which investors love.

Thexton went on to say that 70% of IoT projects actually fail because of the difficulty of getting edge data simply and quickly into usable form. If Sierra can get its integrated end-to-end solution right and solve these problems, it could be a big, value-enhancing opportunity. Thexton said, "when we sell our full solution versus just our hardware, we increase customer lifetime value by three to five times."

As earnings estimates have been taken down to just $0.30 this year and $0.77 next year, Sierra trades at roughly 41 times this year's EPS estimates and around 16 times 2020 earnings estimates. That 2020 multiple is a discount compared to the company's historical forward PE ratio, so the stock may seem inexpensive should earnings tick back up in 2020. 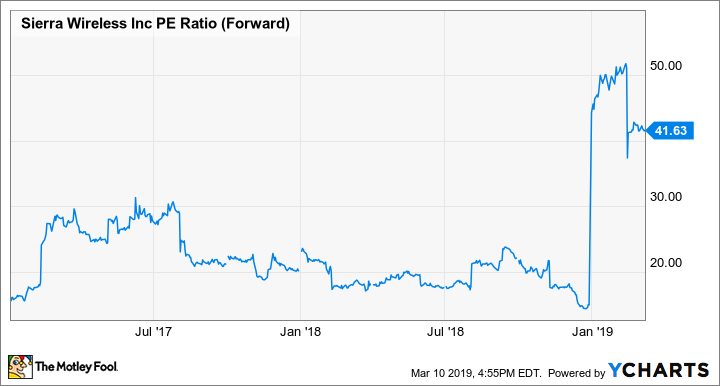 In short, investing in Sierra Wireless is a bet on a turnaround under a new CEO, which could lead to significant upside if it occurs; however, investors will need to be patient. A turnaround doesn't appear imminent, and today's investments could take a while to pay off. There's also the threat of competition from large, well-funded chipmakers, as IoT is a hot area.

Thus Sierra Wireless could make for a good pick as a high-upside, higher risk proposition. It probably shouldn't be an outsized part of your portfolio at this point in time. Wait to see evidence its new end-to-end platforms are catching on -- though that potential development is certainly worth monitoring.