Please ensure Javascript is enabled for purposes of website accessibility
Log In Help Join The Motley Fool
Free Article Join Over 1 Million Premium Members And Get More In-Depth Stock Guidance and Research
By Matthew DiLallo – Updated Apr 13, 2019 at 10:27AM

The midstream MLP has given investors a raise in 24 straight quarters -- and there’s plenty more to come.

Most companies try to give their shareholders a raise each year by increasing their dividends as profits grow. Some companies, however, like to reward their investors more frequently by sending them more money each month. That steadily rising income stream makes these companies extremely attractive to investors who want more cash flowing into their portfolios.

One company with a history of giving its investors more money each quarter is master limited partnership (MLP) MPLX (MPLX 3.56%). The oil and gas midstream company has now increased its cash distribution to investors for 24 straight quarters, which has helped push its yield up to 7.7%. Given its current slate of growth projects, the company believes it can continue sending more money to investors each quarter for at least the next couple of years. 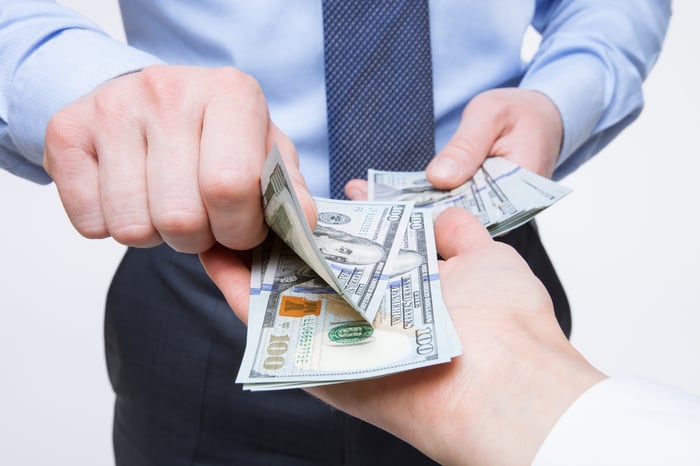 MPLX declared its distribution for 2018's fourth quarter this past January, raising the payout by 1.6% from the third quarter, which puts it 6.6% higher than it was in the year-ago period. The company can easily support that payout level since it generated enough money to cover its distribution by a comfortable 1.36 times, which was an improvement from the 1.28 times coverage it had in 2017. In other words, cash flow grew at an even faster rate than the distribution to investors, which provided the company with a growing stream of retained cash to help fund expansion projects.

Several factors drove the big uptick in cash flow last year. One of the biggest drivers was the acquisition of $8.1 billion of midstream assets from refining giant Marathon Petroleum (MPC 4.80%). In addition to that, MPLX benefited from the purchase of an export terminal from a third party, as well as organic expansions of its pipelines and gathering and processing business. Those same growth drivers have helped steadily increase MPLX's cash flow over the years, which has enabled it to consistently send more cash back to investors.

Check out the latest earnings call transcript for MPLX.

MPLX's business model has evolved over the years. The company initially relied on a steady diet of drop-down transactions with Marathon Petroleum to fuel growth. However, it has shifted its approach in recent years. While Marathon has a few midstream assets remaining after it restocked its cupboard when it bought rival refiner Andeavor, MPLX's main growth driver going forward will be expansion projects.

The company currently has several under construction and more in development. These projects range from additional expansions of its gathering and processing business to participating in new long-haul pipeline projects developed by other companies. For example, the company is one of four partners working to build the Permian Gulf Coast pipeline that would move crude oil from the Permian Basin to refineries and export facilities along the Texas Gulf Coast. Meanwhile, the company is working with several other partners to develop the Whistler Pipeline, which would move natural gas from the Permian to the Gulf Coast.

MPLX currently expects that it will invest $4.2 billion on organic expansions over the next two years, which will grow its distributable cash flow from $2.8 billion last year up to $3.5 billion by 2020. That rising cash flow stream should support continued quarterly growth in the company's distribution, with MPLX planning to increase its payout by $0.01 per quarter this year, or about 6% overall.

The company should have plenty of fuel to continue growing its cash flow and distribution beyond 2020. For starters, it could acquire the midstream assets Marathon Petroleum picked up from Andeavor, as well as merge with Andeavor's former MLP, which Marathon now controls. In addition to that, the company should still have several organic expansion opportunities since the industry needs to invest an estimated $44 billion per year on new energy infrastructure through 2035.

A great income stock for the long haul

MPLX has been a great dividend stock over the years by consistently increasing its payout each quarter. That trend appears poised to continue for at least the next couple of years, given the growth projects the company has already lined up. Because of that, this company looks like an excellent option for investors seeking a steadily rising income stream.