The retailer expects to spend more cash in 2019 even as sales barely improve.

Dick's Sporting Goods (DKS -0.38%) this past week wrapped up a decent fiscal 2018 highlighted by higher earnings. The retailer also met management's modest sales outlook even as it continued to struggle with lost sales from its firearm ban.

The chain doesn't see a return to sales growth occurring until the second quarter of fiscal 2019, though, and that conservative outlook contributed to a sharp drop in the stock price immediately following Dick's earnings report. CEO Edward Stack and his executive team added context to that prediction in a conference call with analysts. Let's take a look at a few highlights from that presentation. 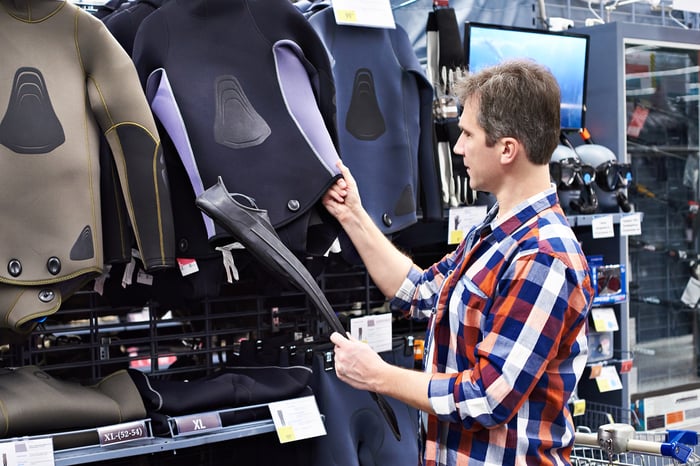 We're very pleased with the performance of our core business during the quarter.
-- Stack

Dick's exceeded both of management's big-picture targets over the key holiday shopping season. Sales fell 2% at existing locations, and that performance led to a 3.1% decline for the full year -- near the low end of the 3% to 4% range executives issued in late November. Comps were positive in apparel, footwear, fitness, outdoor equipment, and Dick's private brands, which improved to 14% of sales from 12%.

Comps fell in the hunting category, as expected, due to the company's firearm selling ban. Without that challenge, sales would have risen by about 1% for the period, management said.

Shoring up the finances

We remain focused on increasing our productivity, as we lower costs and eliminate unnecessary spending across all areas of our business.
-- President Lauren Hobart

The $3.24 per share of full-year earnings Dick's produced was near the high end of its late-November guidance. Looking beyond that headline figure, the financial performance was mixed.

On the plus side, selling expenses held steady in the fourth quarter as cost cuts offset higher wages and compensation. That success was more than offset, though, by a drop in gross profitability. Executives blamed higher shipping, fulfillment, and freight costs tied to its growing online sales base for that slump. Put together, these trends resulted in operating income of $142 million, or 5.7% of sales, compared to $178 million, or 6.7% of sales, a year ago. The good news is that online demand spikes in the fourth quarter, and so the profitability pressure from that channel won't be as large in the coming quarters.

For 2019, we anticipate earnings per diluted share to be in the range of $3.15 to $3.35, and consolidated same-store sales to be approximately flat [to up] 2% for the year. We expect to deliver positive comps beginning in the second quarter by the execution of our strategies as well as the hunt and electronics headwinds we faced last year meaningfully abating.
-- CFO Lee Belitsky

Dick's fiscal 2019 will include far more changes than its roughly flat sales and profit prediction implies. The retailer is pouring cash into the online sales channel, with two new distribution centers set to come online right before the holiday season. It will move further away from the hunting category, too, by removing that segment from about 125 stores and replacing it with higher-growth products like its private brands.

Dick's main merchandising priority is to make its stores more attractive shopping destinations, and investors will see initiatives aimed at that goal throughout the year, including with moves like adding batting cages and revamping the product layout.

Investors weren't happy to hear that all of these initiatives might only deliver flat sales in the context of steady or slightly lower profitability in 2019. But management believes they're making all the right moves to position the business for better growth in stores and online, ideally returning the chain to a path of sustainable sales gains as early as 2020.