Please ensure Javascript is enabled for purposes of website accessibility
Log In Help Join The Motley Fool
Free Article Join Over 1 Million Premium Members And Get More In-Depth Stock Guidance and Research
By Matthew Frankel, CFP® – Updated Apr 14, 2019 at 11:38AM

A rate hike is unlikely, but there's still a lot that could happen.

The Federal Open Market Committee, or FOMC, the policy-making arm of the Federal Reserve, will hold a two-day meeting this week, with its latest interest-rate decision, economic forecast, and closely watched statement scheduled to land at 2 p.m. EST on Wednesday.

While an interest rate hike (or cut) seems to be unlikely, there is still quite a bit for investors to keep their eyes on. Here's a quick rundown of the important things to watch and what the market is expecting. 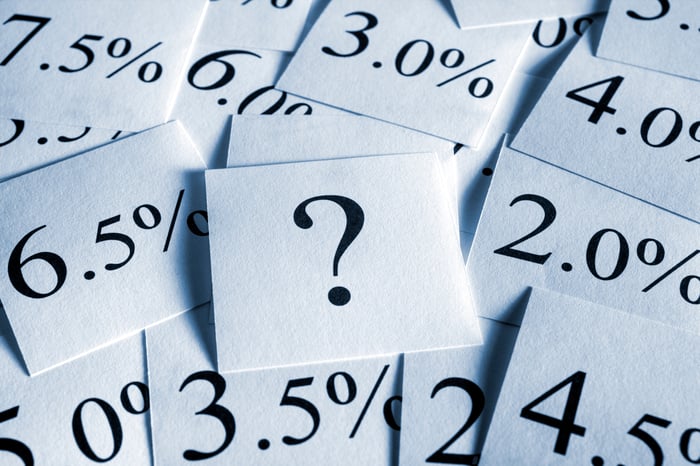 Will there be a rate hike?

The most significant thing that can happen at the conclusion of a FOMC meeting would be an interest rate hike or cut.

However, it's unlikely that interest rates will budge. While there's a higher probability of a rate change in the March meeting than there was in January (the Fed typically only moves rates in March, June, September, or December), it's still not very likely.

The Fed has given the market indications that it is taking a wait-and-see approach for the time being, with FOMC Chair Jerome Powell saying that the committee would be patient with any future rate hikes. Options markets are currently pricing in a 98.7% chance that rates will stay the same, and a 1.3% chance that we'll actually get a rate cut. In other words, the market feels that a rate hike is the least likely scenario.

Other things to watch for

So, unless we get a surprise with a rate change, the target range for the federal funds rate will remain 2.25% to 2.5% at the conclusion of this week's FOMC meeting. However, that doesn't mean this will be a non-event by any means.

In addition to the interest rate decision itself, here are some important things to keep an eye on.

The dot plot: We'll get look at the first FOMC "dot plot" of 2019, which tells us where the committee's members see interest rates going over the next few years. This could be the most significant news out of the meeting, especially if anything changes. Many experts are projecting that the dot plot will show a median of just one rate hike in 2019 (specifically, in the third quarter) and one additional hike in 2020, which would be a significantly lower expectation than we last saw.

In its December 2018 dot plot, the FOMC indicated a median expectation of two further rate hikes in 2019 and one more in 2020.

The statement: Another major piece of the puzzle is the FOMC's carefully worded statement that will be released on Wednesday. In January, the last time the committee met, the statement had a distinctly dovish tone. In fact, the addition of the word "patient" and certain other language in the statement caused a market rally.

Economic forecasts: Along with its statement, the FOMC will release its forecasts for certain economic data, such as GDP growth, unemployment, and inflation. These are significant because they are the data points the FOMC uses when making policy decisions. For example, if inflation is expected to slow down, it could signal that further rate hikes are less likely. Back in December, the FOMC issued a more positive outlook than the market anticipated, increasing investors' expectations of rate hikes going forward and causing stocks to fall.

It's all about the projections

The most important theme of the March FOMC meeting will be where the committee projects things will move in the future. Don't expect any significant action now, but any major changes to future interest rate projections, economic expectations, the FOMC statement, or the committee's plans for its balance sheet could certainly move markets on Wednesday.