Despite rising sales from acquisitions, margins took a huge hit.

The footwear business has been particularly competitive lately, and retail specialist DSW (DBI -4.17%) has had to try to navigate tough conditions for quite a while now. The company has made massive efforts to move forward with growth-seeking initiatives, including major acquisitions and moves to concentrate on its best opportunities for sales gains and profit.

Coming into Tuesday's fiscal fourth-quarter financial report, DSW investors were prepared to see earnings take a significant hit compared to year-earlier numbers, but they still wanted to see the shoe retailer finish in the black. That didn't happen, and the factors that played a key role in contributing to DSW's red ink have its shareholders looking carefully and reassessing the company's prospects for 2019 -- even as the company announced a major rebranding effort. 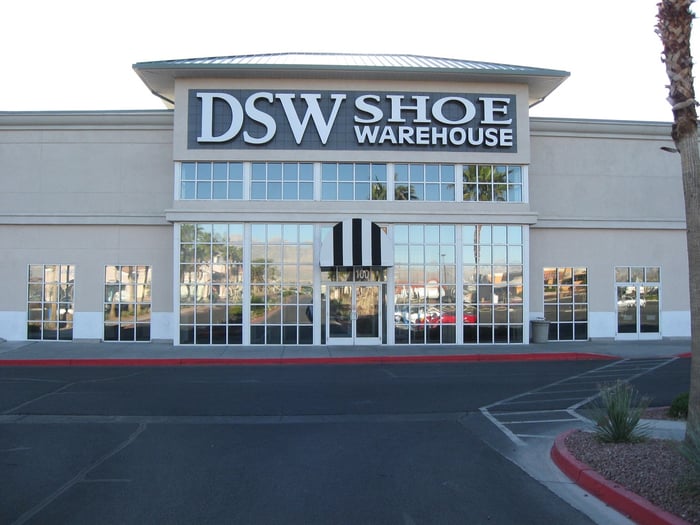 What held DSW back during the holidays

DSW's fourth-quarter results were mixed. Revenue was up 16% to $843.4 million, and that matched up pretty well with what most of those following the stock had expected to see. However, DSW posted a loss of $5.45 million even after making allowances for some one-time negative items on its income statement, and the resulting adjusted loss of $0.07 per share didn't come close to the consensus forecast among investors for a profit of $0.04 per share for the period.

From a fundamental perspective, DSW presented a picture with two different stories. On one hand, some key elements of its business seemed to perform well. The newly added Canada retail and brand portfolio segments contributed a total of almost $154 million in revenue to DSW's total. Comparable sales within the company's U.S. retail segment were up 5.3% during the quarter, and the Affiliated Business Group unit enjoyed even better comps growth of 6.8%. That set overall comparable sales gains companywide at 5.4%, and while that slowed from what DSW saw three months ago, it was a lot stronger than the 1.3% comps gain the shoe retailer posted during last year's holiday period.

There were also some reasons underlying the pockets of weaker performance that also showed up in the report. Revenue from the U.S. retail segment was down almost 2% from year-ago levels, although that downturn was largely due to there being one less week during the quarter than there was in the fourth quarter of the previous fiscal year.

Yet the big problem for DSW was on the expense side of the income statement. Gross margin fell more than two percentage points to below 25%, and operating expenses soared by nearly half compared to the year-ago quarter. Impairment charges of $31.7 million also showed up during the quarter, and substantial expenses from the strategic moves that DSW has made recently also weighed on profitability.

Nevertheless, CEO Roger Rawlins tried to put the quarter's results in a longer-term perspective. "Fiscal 2018 was one of the best years in our Company's history," Rawlins said, "from a comparable sales and earnings growth standpoint." The CEO pointed to the expansion of its DSW Kids concept as well as the relaunch of its loyalty program as key contributors to longer-term success.

What's ahead for DSW?

DSW also believes that its future is bright. As Rawlins put it, DSW has "strategically positioned our company to grow share and enhance profitability through transformative acquisitions, creating an infrastructure that positions us to be a significant force in the footwear industry for years to come."

The biggest news the company announced came at its subsequent investor day, at which it said it expects to do a brand transformation by changing its name to Designer Brands. By doing so, DSW intends to emphasize more fully its recently acquired brands, including Vince Camuto, Jessica Simpson, and Lucky Brand. At the same time, DSW thinks that the closure of competitor Payless Shoe Source's stores should give it a chance to capture more business.

Nevertheless, DSW's long-term forecasts weren't enough to satisfy investors. Even looking out as far as fiscal 2022, the shoe retailer expects earnings to come to just $2.65 to $2.75 per share. That doesn't imply as much growth from current levels of $1.66 per share in adjusted earnings during fiscal 2018 as investors wanted to see.

DSW investors weren't pleased about the news, and the stock fell 15% in morning trading following the announcement. Unless things can get better in a hurry for the shoe retailer, DSW could have trouble bouncing back from its latest setback, and it's asking a lot to expect a name change to reinvigorate the business to such a substantial extent.