The winter offers an interesting mix of forced and optional spending. Consumers have choices to make during the holiday season -- break the bank or have a modest gift exchange -- but when it comes to cold weather, some choices aren't optional.

Sure, you can leave the thermostat a degree or two lower than comfortable and make everyone wear a sweater. You can also elect to shovel your own driveway after a storm or keep last year's winter wear for another season.

When it's extremely cold or colder for longer than expected, however, budgets can be blown. You may have planned for a typical winter, but Mother Nature has a way of wreaking havoc with plans (though some people can wreak financial havoc all on their own, without any help). 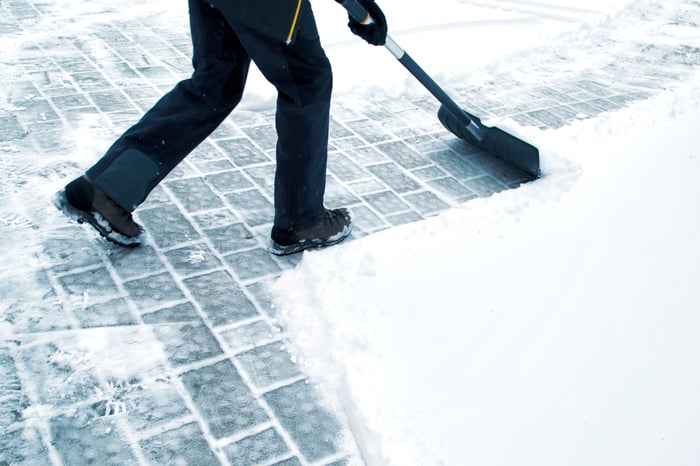 Bad weather isn't the only cause of excess spending between December and February. More than one-third of Americans (34%) said they have spent $1,000 or more on non-necessities (dining out, shopping, vacations, et cetera) during the winter months, according to a new study from MassMutual. Most of those (30%) said they spent more on non-necessities because they "feel more financially comfortable than they did last year."

Almost a quarter of those surveyed spent more than they planned to because of cold weather. Overall, 73% of respondents said they expect to exceed their winter budget whether due to choices they make or realities the weather forces on them.

"There needs to be more self-awareness when it comes to impulsive versus intentional spending, and asking oneself about long-term plans, benefits and impacts of spending decisions," said Tara Reynolds, head of MassMutual U.S. Marketing and Business Development, in an email to The Motley Fool. "My advice: Have someone you trust hold you accountable. If you'd be afraid to tell them about something you spent your hard-earned money on, that's a signal."

Many of those surveyed acknowledge that they may have gone a little bit overboard and plan to make corrections. More than half (56%) plan to save more and/or spend less during the spring and summer. Plans, of course, can go unrealized since 62% acknowledged that they generally spend more in the warmer months.

If you live somewhere affected by seasonal weather, it's important to plan for the worst-case scenarios. That means not only expecting that weather might cost you more than it did in previous years, but also having the appropriate types of insurance.

If you budget too much and the bad weather never comes, or it's milder than expected, you can use that money for something else. If the literal rainy (or snowy) day happens, and you budgeted for it, it won't be fun, but it's a lot better than going into debt to pay for seasonal expenses.

When it comes to discretionary spending, that's more about discipline. You need to know what you can really afford instead of just buying what you want.

"There needs to be more self-awareness when it comes to impulsive vs. intentional spending, and asking oneself about long-term plans, benefits and impacts of spending decisions," Reynolds wrote.

Plan ahead and expect the worst. Make a budget that reflects negative assumptions, and if those don't come to pass, maybe you actually can afford to take a vacation.