D.A. Davidson initiates coverage of Lyft. The 20 underwriters associated with the offering will have to wait.

Folks will have to wait about a week to get behind the wheel of Lyft (which will trade as NASDAQ: LYFT) as investors, but that's not stopping one Wall Street pro from assigning an early bullish rating to the stock. Tom White at D.A. Davidson is initiating coverage of the peer-to-peer ride-hailing service with a buy rating and a $75 price target.

White's shiny new price goal may prove obsolete sooner rather than later. Lyft's updated prospectus finds it looking to go public at between $62 and $68 a share, a move that would bump its valuation north of $20 billion at the high end of that range. Reports on Tuesday night claimed that the offering is oversubscribed, so it wouldn't be a shock if it prices slightly higher than $68. Factor in the buzz that Lyft is generating in this IPO-hungry climate, and White's $75 price target will probably be toast by the opening trades. 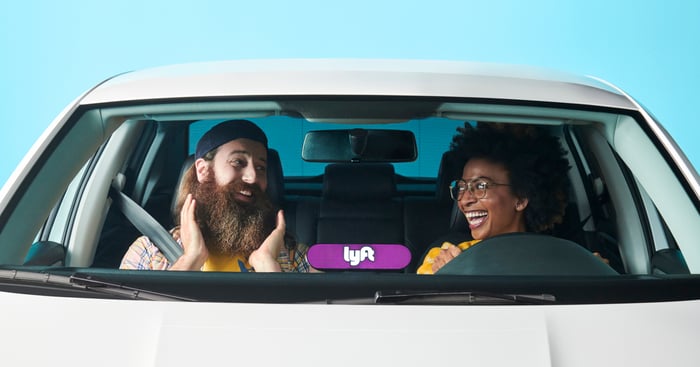 D.A. Davidson's analyst is fashionably early, but that's the one perk of not being one of the 20 underwriters listed on the prospectus. Lead underwriters and other firms involved in the offering will be waiting a few weeks after the stock's debut to chime in with their likely rosy ratings -- unless the stock has bolted into the triple digits by that point.

White is impressed by Lyft's market share gains, as the country's second-largest ride-sharing service is closing the gap with market leader Uber. It also only helps that Uber's dangling a valuation of roughly $100 billion to $120 billion when it hits the market later this year.

Lyft's top-line growth is great. Revenue more than tripled to $1.06 billion in 2017, only to more than double -- up 103% -- to $2.16 billion in 2018. Lyft's momentum is why White is tagging the stock's rich enterprise value-to-sales multiple as reasonable, but it also takes some of the focus away from what the tech-savvy speedster is giving up on the bottom line to make that growth happen.

Lyft is gaining on the surprisingly sluggish Uber, in part, because it is willing to work off leaner markups. Fire up the Uber and Lyft apps side by side in most major markets, and you'll see why comparison shoppers are shifting more of their ride-hailing business to the cheaper Lyft. The result here is that Lyft is losing a lot of money. The deficit here has ballooned from a net loss of $688.3 million in 2017 to $911.3 million in 2018. Lyft will raise more than $2 billion in next week's offering, and it's going to need it as it likely tops $1 billion in red ink for 2019.

The trend is undeniable. Lyft and Uber are in the right niche at the right time. The Lyft IPO hype will only intensify in the coming days, giving D.A. Davidson's White bragging rights for planting the first analyst rating flag on this moonshot. It's going to be a strong debut for Lyft, paving the way for the even larger Uber to explode on the exchange-listed scene in the coming months. But investors will still need to be careful no matter what White and his 20 colleagues will be saying in the weeks to come. Until there's a clear path to profitability, this will be a risky ride.