Most financial businesses make their money by taking risks. Banks do it by making loans, insurers do it by underwriting risk for their insureds.

In contrast, fintechs merely provide the plumbing for the financial world, selling software and services that generate recurring fee and subscription income. As a result, fintechs can grow much faster than traditional financial companies, as they don't have to risk a dollar to make pennies, or keep billions of dollars on their balance sheets to insulate investors from risks they take on.

Below, three Fool.com contributors explain why Square (SQ -2.69%), MercadoLibre (MELI -0.40%), and PayPal Holdings (PYPL -3.43%) are interesting ways for investors to get exposure to fast-growing financial technology companies in their own portfolios.

Matt Frankel, CFP (Square): I've suggested Square to investors quite a bit -- perhaps more than any other stock -- but there's a good reason. More accurately, there are several good reasons.

For starters, there's Square's small business lending platform, Square Capital, which has tapped into just a small percentage of its addressable market. There's the just-introduced Square Installments product that allows businesses to offer financing to customers and could potentially represent millions upon millions in untapped revenue. And don't forget about the company's core payment-processing business, which has been introducing well-received hardware products aimed at large merchants -- an area of the market with a multitrillion-dollar annual payment volume, of which Square has yet to capture more than 1% of. Plus, there are dozens of other products, platforms, and services that help strengthen this ecosystem.

As if that weren't enough, Square is barely in the early stages of the market that could become its biggest cash cow of all: consumer finance. We recently learned that Square's Cash App now has 15 million active users, which has more than doubled over the past year. This is a group that's several times larger than Square's small business customer base and is yet to be significantly monetized.

Square has said before that it aims to be an all-in-one financial ecosystem for its users, with potential growth avenues like deposit products, consumer lending, and an investment platform, just to name a few.

In a nutshell, Square has come a long way in just a few years, but still has massive potential. In many ways, the company's growth story could be just getting started. 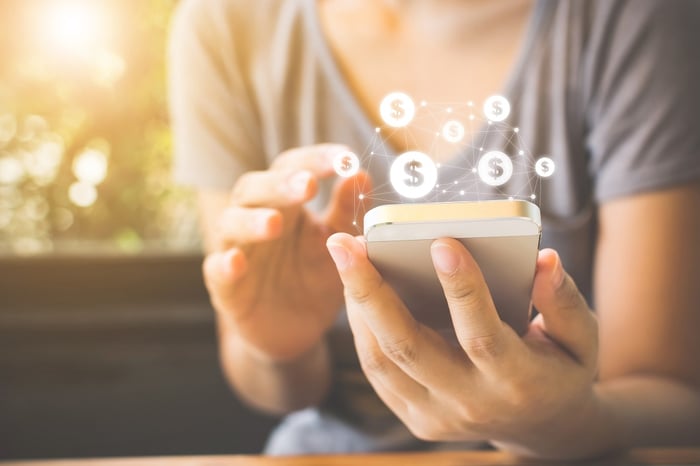 Dan Caplinger (MercadoLibre): When it comes to fintech stocks, MercadoLibre isn't exactly the first company to come to mind for most investors. The operator of Latin America's leading online marketplace has a core business model that seems at first glance to rely more on e-commerce than on anything having to do with financial technology.

However, like its counterpart in the U.S., MercadoLibre has worked hard to create a service that will allow its customers to stay within its system to make payments on the items they purchase. Therefore, MercadoLibre has an associated fintech service, known as MercadoPago, that helps facilitate transactions between parties on its marketplace.

MercadoPago has become a huge part of MercadoLibre's overall success. More than 126 million transactions took place on the MercadoPago network during the most recent quarter, up more than 70% from year-ago levels. About $5.3 billion changed hands in total payment volume, and what's especially noteworthy is that more than $2 billion of that amount represented payments beyond the company's marketplace.

As adoption of MercadoPago rises in brick-and-mortar retail locations and for e-commerce conducted somewhere other than MercadoLibre, the fintech business will see more success. That should boost MercadoLibre's overall prospects -- and perhaps eventually lead to a spinoff of MercadoPago to shareholders.

Check out the latest earnings call transcripts for Square, MercadoLibre, and PayPal.

Jordan Wathen (PayPal Holdings): Founded nearly 20 years ago, it's hard to remember a time when PayPal buttons weren't ubiquitous in online shopping carts and e-commerce platforms. And yet, as one of the oldest online brands, PayPal continues to prove that it hasn't run out of ways to grow.

PayPal's business couldn't be simpler. It helps people and businesses send money to one another easily and safely with just a few clicks or taps on a mobile device. Thus, the moving parts in its business essentially boil down to how much money changes hands, PayPal's average fee on transactions, and how many people and businesses are using its services.

In 2018, active accounts increased 17% year over year to 267 million accounts. Total payments volume grew at a 27% clip in 2018. Of course, both metrics are boosted by Venmo, which processed $62 billion of payments volume. In the fourth quarter, payments volume on the peer-to-peer service increased 80% over the same period a year ago.

PayPal is more of a fintech now than it has ever been, as it sold off its card loan portfolio to Synchrony Financial, eliminating a relatively low-return, high-risk business from its balance sheet, and making it a pure play in payment services.

The risks to PayPal are primarily related to just how much cash it can squeeze from Venmo, particularly considering increased competition from Zelle and other payments platforms. That Venmo becomes the peer-to-peer payments victor is far from certain, but investors can easily justify taking a small stake in PayPal as part of a diversified portfolio to wager on that outcome.

2 Growth Stocks You Can Buy at a Big Discount
413%