Teen use is the focal point of the new restrictions.

Food and Drug Administration Commissioner Scott Gottlieb is not leaving the agency meekly. Having announced he would be resigning from the regulatory body next month, Gottlieb has introduced draft regulations for electronic cigarettes that could fundamentally alter the industry.

Based on numbers showing an "epidemic" of teenage e-cig use, Gottlieb wants the government to clamp down on the flavored liquids used in the devices (a move the FDA acknowledges will likely result in a number of products no longer being offered for sale), restrict the sale of flavored cigars, and give the agency more power to remove other products. He also proposes to shorten by a year the time that certain manufacturers will have to comply with the regulations. 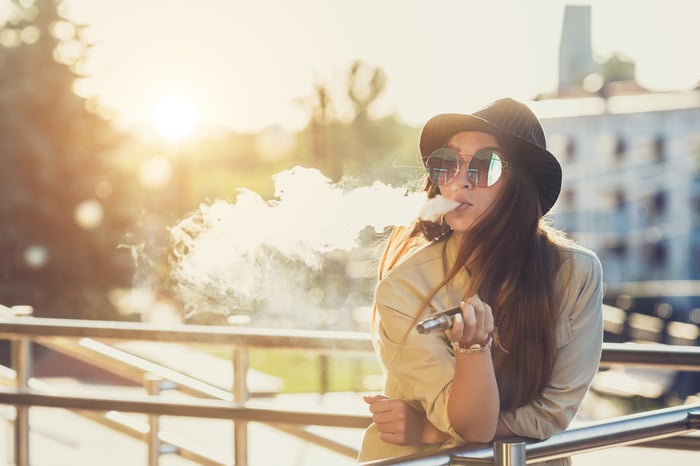 The driving force behind the proposal is a reported increase in youth and teenage use of e-cigs. The guidelines reference various studies that show a significant increase among individuals under 18 who are using e-cigs, and doing so regularly. The FDA notes that between 2017 and 2018, the number of high school students using e-cigs surged 78%, while middle school students' use jumped 48% during the same period.

The draft regulations also point out that the nicotine-infused liquids used in e-cigs that are flavored as something other than tobacco, menthol, or mint are the preferred type chosen by youths, and by a wider margin than for adults. While almost 68% of teens used flavored e-cigs in the past 30 days, only 6% liked mint or menthol flavors. On the other hand, some 37% of adults 25 and older overwhelming preferred mint and menthol.

As a result, flavored e-liquids are getting enhanced scrutiny. For example, under the proposed regulations, the sale of flavors would only be allowed in stores or online by retailers that have a strong age-identification policy. The flavors would also need to have prior approval from the FDA, which the agency expects means a number of flavored e-liquids will no longer be available.  It also plans on restricting the sale of flavored cigars for many of the same reasons, and ultimately wants them banned.

Although mint and menthol are getting a pass for the moment, that might not last long. The guidelines state that if teen use of those flavors increases, the FDA would crack down on them, too.

Of course, that's likely what will happen, because if flavored e-liquids are removed from the market, teenagers will turn to mint and menthol.

Targeted for being too popular

In the crosshairs is Juul Labs, the industry leader in pod-based e-cigs that Altria (NYSE: MO) took a 35% stake in. Juul has been the prime target of the FDA because teenagers reportedly favor the thumb-drive-shaped device more than any other e-cig on the market, and the flavor preference studies that the FDA referenced in its guidelines were based on teens who used only JUUL pods.

In a tweet following the release of the draft regulations, Gottlieb threatened to have the devices taken off the market altogether if teen use doesn't go down:

If teen e-cig use spikes again in 2019 FDA will revisit the continued marketability of pod based e-cigs as a category. Kids mostly abuse cartridge based systems. Against backdrop of rampant teen use closed systems may have no redeeming public health value. https://t.co/PLepQijbT1

An industry on hold

The proposal acknowledges the potential benefits e-cigs provide in helping adults migrate away from traditional cigarettes. A recent study out of the U.K. found them to be twice as effective as any other nicotine replacement therapy. But Gottlieb seems determined to make the denial of access to them by teens his lasting legacy.

Among teenagers, smoking tobacco has declined along with the rise of electronic cigarettes. But the FDA, in declaring in March that it is putting "the full scope of our regulatory tools against this mounting public health crisis," risks reversing that trend. Without e-cig availability, teens may very well return to smoking traditional cigarettes.

The FDA also risks damaging the business of e-cig manufacturers like Juul, Altria, and others that have invested billions of dollars to develop these reduced-risk products. Philip Morris International (NYSE: PM) is still awaiting a decision from the FDA on its marketing application for the IQOS heated tobacco device. But with the agency in flux, a change of administrators at the top, and a determination to aggressively stamp out teen e-cig use, the entire electronic cigarette industry may be put on hold as the ramifications of the new regulations are sorted out.

Why Airbnb Stock Rose Initially, Then Pulled Back Today