Please ensure Javascript is enabled for purposes of website accessibility
Log In Help Join The Motley Fool
Free Article Join Over 1 Million Premium Members And Get More In-Depth Stock Guidance and Research
By Daniel B. Kline - Updated Apr 16, 2019 at 7:30AM

Target, Amazon and others have their sights set on underserved urban-dwelling customers.

City dwellers used to lack a certain class of retail options. True, there might be a supermarket in their neighborhood, or a downtown mall, but in many cases, the urban environment would feature mostly smaller retailers, locally owned shops, and off-brand grocers. To shop at a major chain like Target (TGT 2.46%), people generally had to head to the suburbs.

In recent years, however, that has been changing: Retailers including Target, Amazon (AMZN 3.58%), and Aldi have been experimenting with a variety of store models in city locations.

These aren't full-size supermarkets or department stores, as those would be cost prohibitive in an urban setting. Instead, the chains are looking at small-format stores that offer highly targeted selections of products. 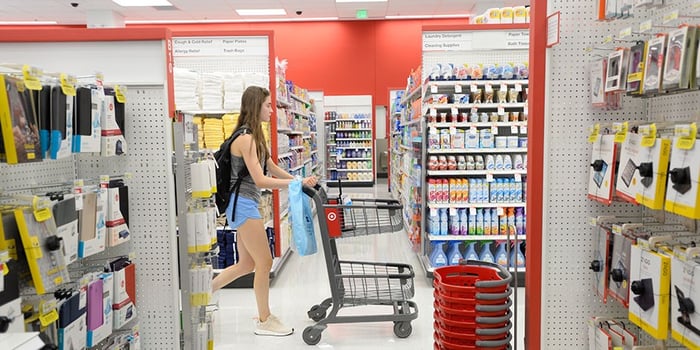 Target is leading the way

Target has jumped ahead of its rivals in the race to bring smaller stores to cities, as well as to areas near college campuses. The chain started testing various formats in 2012, and opened a handful of stores through 2017. In that year, it added 30 small-footprint locations mostly in urban areas. The current plan is to add another 30 a year for the next several years, according to a press release.

These stores are customized to suit their environments, ranging in size from less than 15,000 square feet to 40,000 square feet -- about a third the size of a typical Target. Merchandise in each store is curated for its specific market. Groceries and quick-pickup items are heavily featured, as are household goods and some apparel. You won't, however, see 60-inch TVs on the shelves, because those aren't practical for a customer who arrives on foot to take home.

"We do plenty of research to understand the surrounding community and its needs -- such as noting which other businesses are nearby and conducting listening sessions with local guests, groups and community leaders -- and design our merchandise plans to match," the company said in the press release. "So a small-format located near a bustling tourist shopping destination might have a vastly different assortment than another just six blocks away, located in a residential area with lots of families with kids and babies."

Check out the latest earnings call transcripts for Target and Amazon.

Amazon wants to dominate retail, and it's not content to just control the e-commerce market. It has been testing and planning multiple formats to go after city dwellers, and to win brick-and-mortar market share. These include the company's Amazon Go cashier-free convenience stores. The retailer has not commented on its long-term plans for that format, but it has denied reports that it has committed to open 3,000 of the high-tech stores.

Amazon has also been planning to launch a more traditional grocery chain in major U.S. cities, CNN reported. These stores won't carry the Whole Foods name, but will instead use the Amazon moniker, and offer more-common national brands, rather than the organic and niche fare generally found at the natural-foods focused chain.

Across the pond, the Aldi grocery chain has opened its own version of a small-format store in London, according to Retailwire. At 6,400 square feet, it's about half the size of Aldi's normal locations, and stocks only 300 items (instead of the chain's usual 1,800).

Why groceries and why cities?

Groceries are a $830 billion market in the U.S., according to CNN. Walmart controls 21% of that market, while Amazon has a 4% share, according to an estimate from Cowen. And cities represent an opportunity for the likes of Amazon and Target for a number of reasons.

First, Walmart largely does not serve cities, and it has stopped adding locations to its chain of smaller-format stores. This leaves these markets, with their high growth potential, underserved in many cases.

Second, city dwellers have high (and rising) expectations when it comes to rapid delivery. Adding physical locations gives Target and Amazon more hubs from which to offer them same-day delivery (and even, maybe, drone delivery). City real estate can be expensive, but if those stores serve an omnichannel purpose, it's easier to justify the business case for a retailer to grow its urban footprint.