Please ensure Javascript is enabled for purposes of website accessibility
Log In Help Join The Motley Fool
Free Article Join Over 1 Million Premium Members And Get More In-Depth Stock Guidance and Research
By Rich Duprey - Updated Apr 17, 2019 at 10:52AM

The strength of the state's online gambling and sportsbooks is leading a resurgence.

Atlantic City casinos may look like they're holding a hot hand, with slots and table game revenue jumping 15.7% in February from last year, but only Caesars Entertainment (CZR) and Resorts Casino Hotel actually saw gains at their physical casinos. All the other casinos reported year-over-year declines except the Hard Rock, which has only been open eight months.

February typically has not been good for Atlantic City casinos. The cold winter winds, rain, and snow keep gamblers away, and last year, it was a similar situation, though then it was only the Golden Nugget that was able to report an increase. 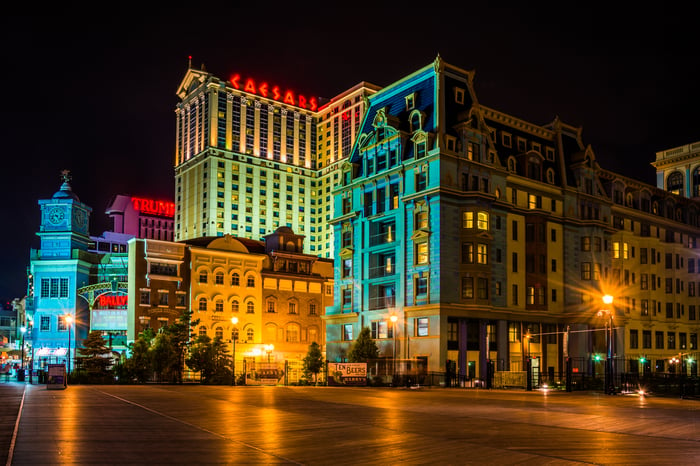 What is sustaining Atlantic City's casinos is not their slots and table games but rather their online operations and their sports betting, which was legalized last year. Each of the five casinos that operated internet gaming platforms both last year and this year enjoyed growth in gaming win for February, and almost all saw substantial increases.

Online gaming, which has been legal in New Jersey since 2013, has been a major success. A 2017 study by iDevelopment and Economics Association found that online gambling had seen revenue grow at a compounded 27% annual rate and has grown from 5.4% of land-based casino net gaming revenue to 11.9%. Sports betting may end up being even bigger for the state, since in less than a year, it has grown to account for almost 10% of land-based casino wagering.

Atlantic City's total gaming win jumped 21% in February when you include online and sports betting. For example, because the Golden Nugget saw its internet win rise by $2.8 million year over year, it was able to offset a $1.6 million loss on table games, poker, and slots as well as a $125,000 loss on sports betting.

February marked the ninth consecutive month total gaming revenue rose in Atlantic City, and it is likely the streak will continue into March -- and perhaps for the rest of the year -- as college basketball's March Madness tourneys are in full swing and the 2019 Major League Baseball season just began.

Check out the latest earnings call transcript for Caesars Entertainment.

A duopoly of excellence

Resorts Casino is the state's standout performer, experiencing 23% growth in its casino games but also enjoying a 76% gain from its internet gaming operations. The reason for this superiority is that not only does it host its own online gaming platform, but Resorts partners with some top third-party operators, including PokerStars, Mohegan Sun, and DraftKings, one of the premiere sportsbooks in the state with a 33% share of the market (only FanDuel at The Meadowlands racetrack is bigger, with a 48% share).

Yet Caesars Entertainment is also benefiting from its online relationships. It, too, has its own online platform, as well as one for Harrah's, plus it's partnered with World Series of Poker and 888 for poker and casino games.

Caesars' resurgence is threatening to overtake MGM Resorts' Borgata as the third-largest online casino in New Jersey. Year to date, Caesars Interactive posted almost $8.9 million in internet win compared to Borgata's $9.2 million. It also happens to come as billionaire Carl Icahn is looking for Caesars to sell itself. The activist investor has a near-10% stake in Caesars, has put three directors on the board, may choose a fourth, and is reportedly angling to partner with the owner of the Golden Nugget to acquire the casino.

The February performance of all the casinos is more remarkable because the month has three fewer days than January, yet the resorts were able to put up $11.5 million more in total gaming revenue. Most of that was due to the outstanding performance of Resorts Casino and Caesars Entertainment, and it's clear online gambling and sports wagering have saved Atlantic City from continuing down the spiral it was on. They also bode well for further growth ahead.

Editor's note: This article has been corrected to show that MGM Resorts owns the Borgata.