The market's been rallying this year, and that means that most good and even many bad stocks are moving higher. It may be tempting to buy even the ugly companies out there, but resist the urge. You're better than that. 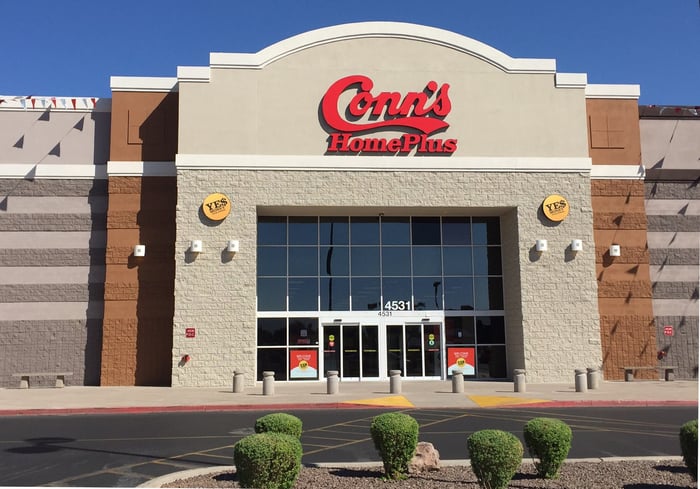 Selling furniture pieces, mattresses, home appliances, and consumer electronics through a bricks-and-mortar setting is the way many corporate obituaries start these days, but you might be tempted to give Conn's a shot after eyeing its three-year chart. Shares of Conn's nearly tripled in 2017, and while they sold off sharply in 2018, the stock is bouncing back in 2019 with a 26% gain year to date.

The problem with Conn's is that its gains in the past have come from unsustainable catalysts. The stock skyrocketed in 2017 -- despite declining sales -- as a credit turnaround story. The 125-unit chain decided to eliminate some money-losing product categories and beef up its financing standards. It would no longer sell big-ticket items to deadbeat borrowers, and the end results were improving credit delinquencies and healthier margins.

Results have been weak lately, though mostly as a consequence of Hurricane Harvey in the summer of 2017, sales were boosted in subsequent quarters as folks hit up its stores in impacted areas to replace destroyed belongings. Conn's is bracing investors for the weakness to continue in the new quarter but turning positive for the entire fiscal year. The long-term issue with Conn's is that we know how this story ends. Online companies are getting better about selling everything from furniture to next-gen mattresses. Conn's has probably squeezed the most of its gains as a credit turnaround story, and it can only watch so many of its weaker peers go under before it joins the bankruptcy filing party.

Check out the latest earnings call transcripts for Conn's and Gogo.

This one is personal, but I have the math to back me up. A couple of years ago, I was giving Gogo a lot of my in-flight money. The provider of airborne connectivity was riding high, and since it seemed to be the platform of choice on my flights, I went ahead and got not one -- but two -- credit cards that offer Gogo vouchers as perks. My timing was lousy. Now that I have the vouchers, most of the planes I ride are switching to rival in-flight internet providers.

Gogo isn't disappearing from the navigation map. Revenue rose 16% in its latest quarter, but this was entirely the handiwork of equipment revenue growth. Its bread-and-butter service revenue declined slightly for the period, and Wall Street sees Gogo's top line sliding in 2019. Net and operating losses continue, as updating its fleet to compete with speedy and somewhat reliable alternatives doesn't come cheap. Analysts expect the losses to continue for years. Buckle up. It's going to be a bumpy flight.

One of the hottest industries over the past year is cannabis, and that has created valuations that are -- pardon the pun -- high. Too many investors are chasing too few stocks, and while there will be room for some of the established players, it's hard to stomach the valuation of some of the fringe players.

Quebec's HEXO recently reported financial results for the first full quarter since the legalization of adult-use cannabis in Canada, and gross revenue clocked in at the U.S. dollar equivalent of $12.3 million with net revenue barely above $10 million. Top-line results will continue to grow -- and some lucrative deals and a shrewd recent acquisition will pad those gains -- but is this really a stock that should be commanding a market cap of nearly $1.4 billion?

When Jefferies analyst Owen Bennett initiated coverage of nine different cannabis stocks last month, HEXO was just one of the two names that he tagged with a bearish underperform rating. The stock has nearly doubled in 2019, and a good chunk of those gains has come since Bennett's uninspiring rating. Some of the larger players in this field will thrive in the years to come, but the inevitable shakeout won't be kind to the overpriced fringe players.