The deep discounter's investments for growth should begin paying off next year.

Investors didn't like that Dollar General (DG -1.39%) missed analyst estimates in its fourth-quarter earnings report, nor did they care for the weak guidance the deep discounter issued. Even though the company reported higher sales and robust comparable-store sales growth that exceeded expectations, shares of the dollar store tumbled 10% on the report.

But by focusing only on the impact and not why it's occurring, investors are missing the fact that Dollar General is investing in its future, building up its competitive strengths while also helping to keep rivals at bay. 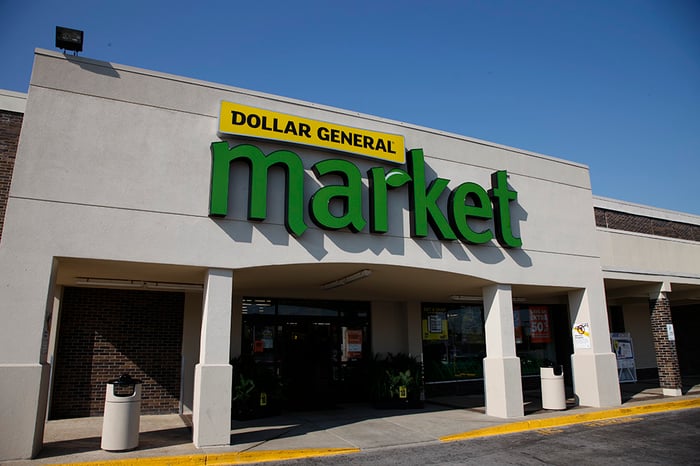 During the conference call with analysts, CEO Todd Vasos laid out five areas Dollar General is looking to beef up its business. It will:

The initiatives are contained under two broad, strategic umbrellas the dollar store chain is labeling DG Fresh and Fast Track. The $50 million investment it is making will cause profit margins to contract, but the payback for them could occur as soon as next year.

Under DG Fresh, Dollar General will be switching to a self-distribution model for additional produce, both fresh and frozen. By doing so, it will save money, allow employees to restock shelves more quickly, and provide consumers with a better and greater assortment of goods.

The program, which began earlier this year with 300 stores in the Northeast and will encompass most of the costs Dollar General is spending this year, should be in 5,000 of its 15,000 stores by the end of the year.

The Fast Track component begins with a new distribution system in its warehouses that packs up goods for shipment based on where they will be set out in the stores. The idea is to have employees touch items the fewest amount of times possible while making the process faster. Having goods in stock and on shelves faster should lead to increased customer satisfaction.

It then incorporates the addition of self-checkout lanes and -- later on this year -- the launching of a click-and-collect program, letting customers buy their goods online for pickup at the store. Dollar General will also launch its own store-label baby product and cosmetics brands.

Investing to meet the competition

Unlike rival Dollar Tree and its Family Dollar chain, Dollar General is increasingly competing against grocery giants like Walmart and Kroger, as well as discount chains Aldi and Lidl. For years, Dollar General has operated a string of DG Markets stores that carry a broad assortment of fresh produce.

Last year it launched another initiative called Better for You, which introduced more-healthful food items into over 2,500 stores. And since it continues to believe the number of freezer cases it installs also boosts sales, it will be installing thousands of new freezers this year across its entire store base, helping Dollar General offer greater product selection, potentially driving higher traffic and likely increasing sales as well.

Of course, all this investment is going to pinch profits initially. Dollar General forecasts it will earn between $6.30 and $6.50 per share in 2019, which was below Wall Street's forecast of $6.65. But reacting to the lower figure without understanding why the deep discounter has reeled in expectations would be a mistake for investors, who would miss the potential for superior growth.

Dollar General is looking to the future, seeing its competition, understanding what its customers are looking for, and wisely investing to meet those challenges and expectations. Investors who discount those efforts may come up a day late and a dollar short when Dollar General ends up reaping the payoff.