Biogen threw in the towel with once-promising Alzheimer's disease drug aducanumab. But these three late-stage pipeline candidates could potentially still emerge as winners.

Until recently, Biogen's (BIIB 1.64%) aducanumab was considered by many as the best hope over the near term for a new drug to treat Alzheimer's disease. However, any such hopes were dashed last week after Biogen and its partner, Japanese drugmaker Eisai, halted two late-stage clinical studies evaluating aducanumab in treating Alzheimer's disease.

With aducanumab no longer a contender, which drugs are the leaders in the race to develop an effective treatment for Alzheimer's disease? Probably the top candidates are experimental drugs being developed by Avanir Pharmaceuticals, which is owned by Otsuka Holdings (NASDAQOTH:OTSKY), Axsome Therapeutics (AXSM -4.73%), Amgen (AMGN -0.54%), and Novartis (NVS -0.44%). Here's a quick update on these leading Alzheimer's disease drugs in development. 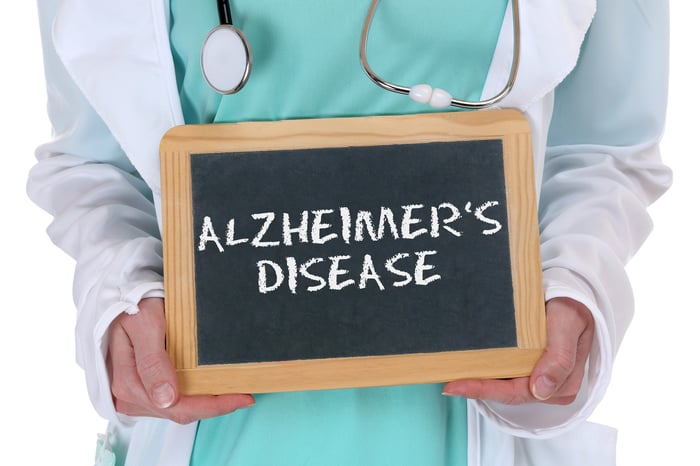 Avanir Pharmaceuticals delivered perhaps the most promising recent news in the field of Alzheimer's disease drug development this week. On Monday, the company announced encouraging results from a phase 3 study evaluating AVP-786 in treating moderate-to-severe agitation in patients with Alzheimer's dementia.

One of the two doses of AVP-786 administered to patients in the phase 3 study met the primary endpoint by demonstrating significant improvement on the Cohen-Mansfield Agitation Inventory, a 29-item scale used to assess agitation in patients. Another dose demonstrated improvement but not enough to be statistically significant.

This study used the Sequential Parallel Comparison Design (SPCD), which is geared toward reducing the impact of high placebo responses in clinical trials. Avanir is also evaluating AVP-786 in two additional phase 3 studies that use a conventional approach with two patient groups -- one receiving the experimental drug and the other control arm receiving placebo. The first of these two studies is scheduled to wrap up in late 2019.

Axsome Therapeutics is currently conducting a phase 2/3 clinical study evaluating AXS-05 in treating agitation associated with Alzheimer's disease. In December 2018, the biopharmaceutical company announced positive results from an interim futility analysis of the study. These kinds of analyses are intended to provide an early warning if a clinical study should be stopped because an experimental drug is clearly ineffective.

Initially, Axsome planned for the study's Independent Data Monitoring Committee to perform another interim futility analysis. However, the company opted to scuttle this second futility analysis to "preserve the statistical power" for the final analysis from the clinical trial. Axsome expects to announce results from the study in the first half of 2020.

There should be news for AXS-05 in another indication before then, though. Axsome should report results from a phase 2 study of the drug in treating depression in the second quarter of this year.

Check out the latest earnings call transcripts for Biogen, Amgen, and other companies we cover.

With aducanumab's failure and other clinical setbacks over the last couple of years, there are very few drugs in late-stage development that seek to treat or prevent Alzheimer's disease itself rather than complications from the disease. One of them is AMG520 (also known as CNP520), which is being developed by Amgen in collaboration with Novartis.

AMG520 inhibits the beta-site amyloid precursor protein cleaving enzyme-1 (BACE1). The BACE1 enzyme is key in the development of amyloid beta, prices of protein that clump together and over time lead to a buildup of amyloid plaque in the brain. Drugmakers have thought that BACE1 inhibitors could prevent the accumulation of amyloid plaque and slow the progression of Alzheimer's disease.

So far, though, quite a few BACE1 inhibitors have stumbled in clinical testing. Amgen and Novartis hope that AMG520 will be an exception. It will take a while before we find out if the experimental drug will succeed where others have failed, though: The phase 3 study of AMG520 isn't scheduled to complete until 2024.

The good news is that experimental drugs such as AVP-786 and AXS-05 hold promise in treating agitation related to Alzheimer's disease dementia. And the failures should help researchers learn more about the disease. However, as Biogen's recent disappointment for aducanumab shows, investors contemplating betting that a drugmaker will succeed with an experimental Alzheimer's disease drug should exercise caution.