One of the biggest criticisms of renewables is that they don't always provide power since the wind doesn't always blow, and the sun isn't always shining. Because renewable electricity generation can be intermittent, it's at a disadvantage to coal, natural gas, and nuclear power plants that produce steady power.

Many utilities work around these intermittence issues by also building cleaner gas-fired plants, which can provide power on demand and is a cheaper alternative to battery storage. However, NextEra Energy (NYSE:NEE) is leading the way in developing next-generation energy facilities that include battery storage so that they produce a steady stream of clean power. The company recently announced two groundbreaking projects that could serve as a blueprint for renewable development in the future. 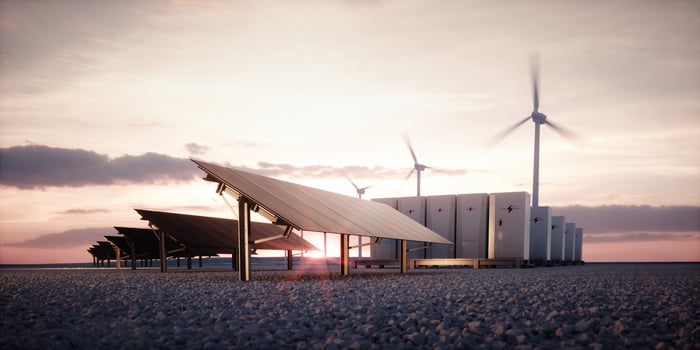 Last month, NextEra Energy unveiled plans to build a first-of-its-kind energy facility in Oregon. The Wheatridge Renewable Energy Facility will combine 300 MW of wind, 50 MW of solar, and 30 MW of battery storage, marking the first time in North America that all three technologies will be co-located and integrated into one energy generating facility. It will also be one of the largest solar farms in that state as well as one of the biggest battery storage projects in the country. NextEra is building the project with utility Portland General Electric (NYSE:POR), which will own 100 MW of the wind farm while buying the power produced under a 30-year purchase agreement. Portland General Electric's CEO, Maria Pope, sees the project serving as a "model for integrating renewable generation and storage to cost-effectively reduce emissions while maintaining a reliable grid."

Meanwhile, NextEra's utility, Florida Power & Light, recently detailed plans to build the world's largest solar-powered battery system. The Manatee Energy Storage Center will have 409 MW of capacity, which is four times the size of the largest battery system currently in operation. The company is co-locating this facility at an existing solar power plant, which will charge the batteries during the day, allowing them to supply electricity during periods of peak demand. The project will increase the predictability of solar, enabling the company to provide clean power even when the sun isn't shining. The battery storage system will replace an aging fossil fuel plant that had been helping bridge that gap. 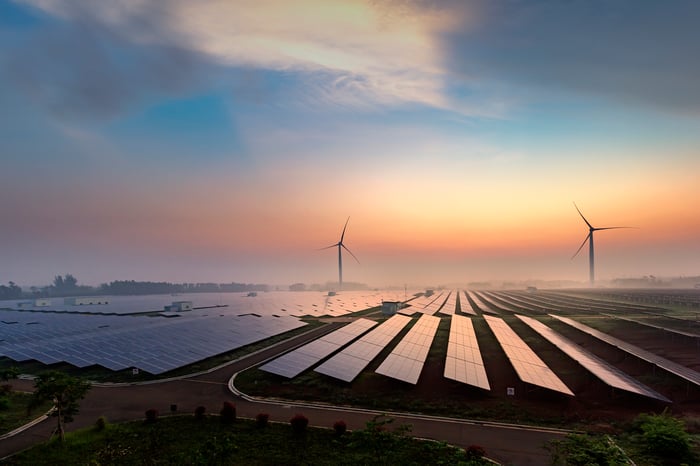 NextEra is making targeted investments to add battery storage in ways that make the most financial sense. The Manatee Energy Storage Center, for example, will replace two natural gas power plants that have been around since the 1970s. Because of their age, these plants cost more to operate, which resulted in the company charging higher rates during periods of peak demand. However, those costs will come down by replacing the aging plants with solar-powered batteries to provide that peak power.

The overall cost of adding battery storage to renewables has plummetted 70% since 2010, making it much more competitive with fossil fuels. In the company's view, storage is nearing an inflection point. CEO James Robo stated on the company's fourth-quarter conference call:

In other words, costs are on track to fall to such an extent that a new solar or wind facility with some battery storage capacity will soon produce cheaper power than all but the most fuel-efficient natural gas plants. In the meantime, however, the company can target investments to add battery storage where it still makes financial sense, such as by replacing older fossil-fuel plants.

The future for battery storage is looking brighter by the day

NextEra Energy is leading the way in adding battery storage to renewables so that they generate a steadier stream of electricity. These investments are helping push the industry toward the day when it will be cheaper to produce power from renewables even with the added costs of solar than it would be from nearly all other sources. It's why investors won't want to miss the game-changing growth opportunity that appears to be ahead for renewables.