Investors have been anticipating the debut of the workplace-communication service.

If you've ever felt exasperated with your work email, you can probably understand the value proposition for Slack, a popular workplace-communication platform.

Slack says its mission is to "make work life simpler, more pleasant, and more productive," and describes itself as a collaboration hub that brings people, information, and tools together to get work done. Teams at companies large and small rely on Slack to communicate quickly with one another.

In February, Slack filed confidentially to go public through a direct listing, meaning investors should soon be able to get their hands on the stock. But first, let's review a few things about the closely held company.

Slack is a messaging platform that operates through channels. Users choose or are assigned channels to share with co-workers based on projects, assignments, and ongoing workflow. Conversations in Slack are easily searchable so users can find information when they need it, and Slack has ways to integrate with over 1,500 apps and websites that companies rely on every day.

In many ways, the company is disrupting email as the traditional mode of workplace communication. Slack allows for real-time conversations. It eliminates clutter like email signatures or unwanted reply-all messages, as well as other issues that make it difficult to track down or even receive information. The service also protects users from the kind of spam that fills up inboxes because Slack teams are open only to specific users, and within a company not every employee will need access to every channel.

That functionality has made Slack popular with much of the working world. The platform boasts more than 10 million daily active users and 85,000 paid teams, including 65 of the 100 biggest American companies by revenue as users. It's also used in more than 150 countries. 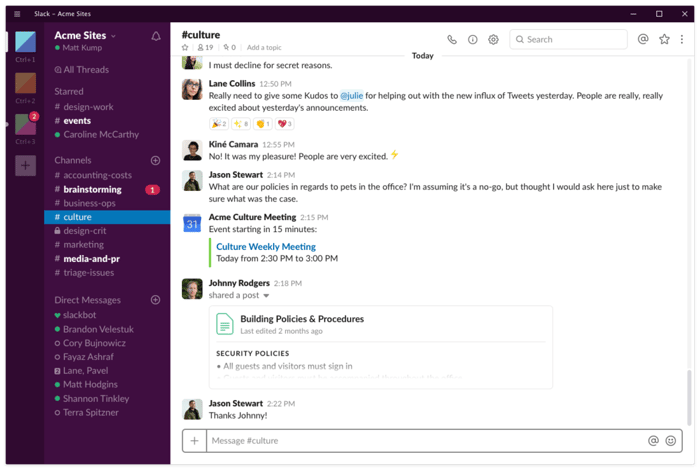 A screenshot of a Slack channel. Image source: Slack.

Founded in 2009, Slack was valued at $7.1 billion in its most recent funding round last August, but the company's history is more roundabout than you might expect. Part of Slack's success emerged accidentally as the company built an internal chat program to serve its own needs before launching it publicly, using the tool for an extended period before it realized it could solve office-communication problems on a broad scale.

Founder Stewart Butterfield and his team actually set out to build a gaming company called Tiny Speck. But in 2013 after Tiny Speck's gaming ambitions flopped, the company began commercially developing Slack, an acronym for Search Log of All Communication and Knowledge. It tweaked and scaled the product as larger workforces began using it, and it released the service on desktop, iOS, and Android by the end of that year.

By the end of 2014, the same year it released the app to the world, the company had raised $180 million and had 30,000 active teams using Slack. The messaging platform has continued to scale up since then, adding more users and creating more functionality by adding integrations (Slack's name for connecting tools and apps to its platform) to popular software solutions including Dropbox and PayPal.

Slack makes money by charging subscribers. It's free for basic service, and goes up to $12.50 per user per month for its Plus service. Its Standard service is $6.67 a month. Beyond that, the company also offers the Slack Enterprise Grid at a higher cost, to power multiple interconnected workspaces.

The messaging service brought in $221 million in revenue in the year ended January 2018, according to the website The Information, and its top line was projected to grow 78% to $389 million last year. For the current year, the company sees revenue of $640 million, up 64%.

On the bottom line, The Information said, Slack was set to finish last year with negative $65 million in free cash flow (FCF), but expects that to turn positive this year with a projected $14 million in FCF. Its balance sheet looks strong with $900 million in cash as of October 2018. Slack's decision to use a direct listing -- which doesn't bring in the new funding that comes with a traditional IPO but instead creates a public market for existing investors -- is an especially prominent signal that the company is confident in its financial strength and cash position.

What about Slack's competition?

Though Slack may seem to have locked up the office-messaging platform industry, other providers are angling for a piece of the pie. Among the notable competitors is Microsoft (MSFT 0.07%), which built its empire on office and enterprise solutions.

Microsoft publicly launched Teams, its direct competitor to Slack, in March 2017 and recently said it had more than 500,000 organizations using it, including 91% of the Fortune 100. That means the software giant has quickly gained on Slack, which last May reported that it had more than 500,000 organizations using its software. A key difference here is that all of Microsoft's Teams users are paid users, though the starting price is lower than Slack, and only 85,000 of Slack's users are paid.

Microsoft has focused on beefing up Teams' capabilities, adding tools for specific industries like healthcare. And the software has the benefit of easy integration with the company's other products, including Outlook, Yammer, and SharePoint. Microsoft Teams seems to be favored by larger companies that already depend on Microsoft products, while Slack is considered more agile and integrates with a larger number of external apps and isn't limited to a single ecosystem.

Alphabet (GOOG 1.56%) (GOOGL 1.90%) launched Hangouts Chat last year, its own competitor to Slack, which pairs with Google Drive, as the search giant steps up its focus on providing solutions for businesses. Hangouts Chat is available at no extra cost for businesses using G Suite. Slack allows for significantly more app integrations than Hangouts Chat, but the Google product may appeal to customers already using the company's other Drive solutions, including Docs, Sheets, and Slides.

Slack also faces a number of smaller competitors, but Microsoft and Alphabet appear to be the biggest potential threats, considering their size, well-known brands, and the enterprise-focused product suites they already own. Slack's open platform and its ability to integrate with a wider range of apps give the company something of an advantage, or at least an important distinction, especially for businesses that aren't partial to Microsoft or Google.

The good news for Slack is that switching costs for this kind of service are high. Migrating data from one platform to another is one hurdle, and employees might be reluctant to switch to another platform once they are already up and running on Slack and accustomed to using it, giving the company a first-mover advantage.

Even better for investors, cloud stocks have largely outperformed in recent years as the industry is seeing rapid growth, and subscription-based software-as-a-service providers like Slack tend to generate significant profit margins once they scale up, since costs are relatively fixed. Considering those two factors as well as the company's skyrocketing growth, Slack is likely to generate a lot of investor attention when shares hit the market later this year.