The first quarter of 2019 ended over the weekend, and news reports are heralding the strong start that the stock market has gotten so far this year. The Dow Jones Industrial Average (DJINDICES:^DJI) rose more than 11% during the first three months of 2019, picking up more than 2,600 points. Other popular stock market benchmarks put in their best quarterly gains in a decade, convincing many investors that the bull market remains alive and well.

But before you start celebrating, it's important to consider where we were three months ago. The fourth quarter of 2018 was an ugly period for stocks, and the returns for the Dow and other stock market indexes were among their worst in years. The Dow's drop of nearly 12% more than wiped out the gains that the average had seen during the first three quarters of 2018, leaving it with a loss for the full year.

Now imagine if instead of paying attention to the huge plunge to finish 2018 and the subsequent bounce to begin 2019, you had simply ignored your investment accounts between the end of September and now. As you can see below, you would've ended that half-year period with just a small loss. 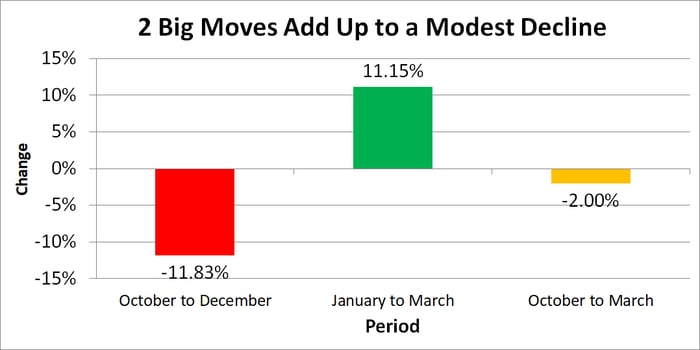 The beauty of long-term investing is that you don't have to pay attention to your stocks all the time. In fact, many investors find it easier not to watch the daily moves in the market, instead focusing on the underlying business prospects of the companies whose shares they own. With most companies reporting their financial performance only once every three months, there's little need for shareholders who believe in the long-term strength of a company's fundamental business to keep an eagle eye on every move higher and lower on a stock price chart.

With the market having largely recovered from its latest swoon, it's a good time to assess how you reacted during this volatile time. If you panicked and sold off stocks near their December lows only to watch from the sidelines as they regained all their lost value, then you need to understand that you're not as tolerant of market risk as you thought. However, if you were able to weather the storm and stuck with your stocks through thick and thin, then you might have what it takes to be a successful long-term investor.