Will the third time be the charm for Constellation Brands (NYSE:STZ)? The brewer and winemaker tripled down on Canopy Growth (NASDAQ:CGC) last November by investing for the third time in the cannabis grower. The $4 billion cash infusion gave Constellation a 37% stake in the fast-growing pot producer.

Legal weed may arguably be its most interesting aspect now, but Constellation still has more-important businesses worth considering. Its stock is sitting 28% below its 52-week high after it cut guidance for full-year profits and also said beer wasn't flowing as freely as it had been. Here's what's on tap for the brewer with its earnings report scheduled for Thursday, April 4. 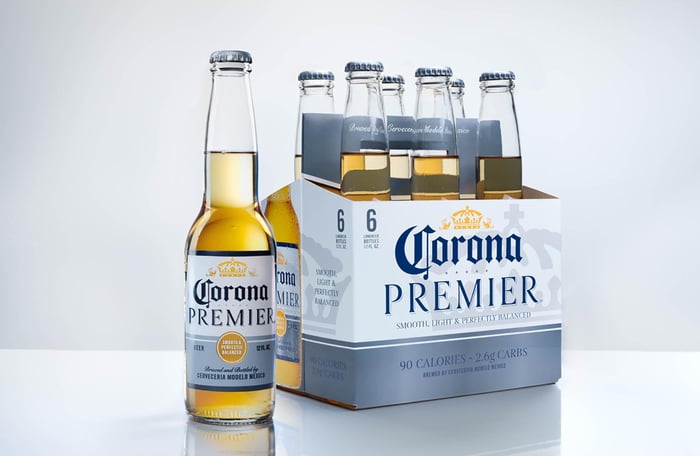 Crying in their beer?

While the craft beer industry is barely eking out gains, the owner of the Mexican import brands Corona and Modelo continues to post strong depletion growth, with its family of beers up 8% last quarter. Depletions are sales from distributors to retailers and are an industry proxy for consumer demand.

In introducing its new Corona Premier brand, Constellation saw its marketing costs soar 11% for the quarter, which cut its operating margins 60 basis points to 37.3%.

Although it continues to gain market share, the beer business seems to be slowing because despite all the extra ad dollars, depletions missed analyst expectations, and the increase was less than half the rate of a year ago.

Constellation has also been suffering from a slowing wine market, so it plans to sell its low-end wine brands, which include Clos du Bois, Mark West, and Arbor Mist. Privately held E. & J. Gallo Winery is said to be interested in buying the portfolio, which could be worth as much as $2 billion.

At an industry conference in February, CFO David Klein said, "Everything that's not a power brand, you can assume that we're either going to sell it, discontinue it, or milk it very quickly over the next year or so."

Profits on the line

In January, Constellation cut its earnings forecast for fiscal 2019 to a range of $9.20 to $9.30 per share from its previous outlook of $9.60 to $9.75. In addition to the marketing expenses mentioned before, the drop also reflects about $0.25 per share in earnings for the costs associated with its investment in Canopy Growth, which was financed primarily with debt. Constellation now has almost $11.8 billion in long-term debt on its balance sheet and only $130 million in cash.

Klein also noted at the conference that Canopy Growth continues to perform worse than expected, and the pot grower's latest big quarterly miss would cause Constellation to take a $0.10 per share hit to fourth-quarter earnings.

Still, even with the slowing business, Constellation Brands is a cash machine. It generated $2 billion of operating cash flow last quarter, a 34% increase from the year-ago period, along with $1.4 billion of free cash flow, up 77% year over year.

One toke over the line?

Because of the billions Constellation is investing in Canopy Growth, the impact it's having on performance now can't be ignored, whatever the growth trajectory purportedly looks like. Last quarter, the brewer wrote down the value of its investment in Canopy by $164 million.

The alcoholic beverage market may be moving toward one of synergy with cannabis, but here in the U.S. it is still a limited opportunity for the foreseeable future, facing high hurdles from regulatory backlashes and state timidity in legalizing marijuana. All eyes will be on how Canada performs with its legal pot market to get a sense of how it might work here.

For all its recent woes, Constellation Brands still has a premium portfolio of high-value brands, and by jettisoning its low-end wine business it will be able to apply itself more to beer and more expensive wines -- and yes, cannabis-infused alcoholic beverages.

The legal cannabis business is going to grow in fits and starts, and the company's investment in Canopy Growth won't be fully realized for some time. So investors would do well to see what management plans to ensure that the rest of its business works as intended.

Beyond Pot, What Constellation Brands Investors Should Look for in Q4 @themotleyfool #stocks $STZ $CGC Next Article
Current