The airline giant published a surprisingly strong guidance update on Tuesday. It also announced a long-term renewal of its valuable partnership with American Express.

Airline stocks have been under siege in recent months. U.S. economic growth appears to be slowing, the federal government shutdown that lasted from late December to late January hurt demand earlier this year, and oil prices have rebounded quickly from a late-2018 slump, which affects fuel prices.

However, Delta Air Lines (DAL -3.45%) shareholders finally got some good news on Tuesday. The airline giant boosted its forecast for the first quarter and also announced a long-term renewal of its lucrative partnership with American Express (AXP -2.00%), which should help Delta achieve strong earnings growth in the coming years. As a result, Delta Air Lines stock surged on Tuesday, rising 7% as of 1:45 p.m. EDT. 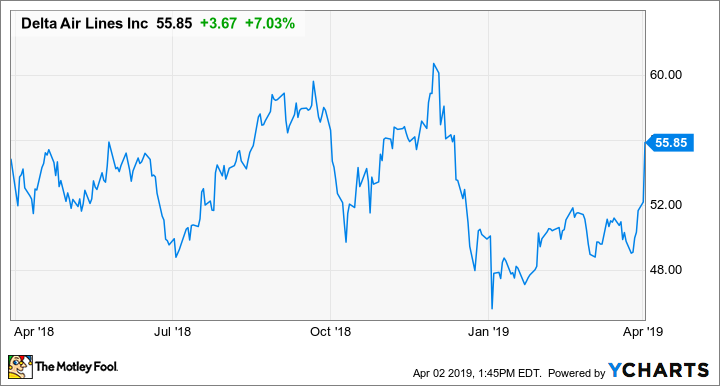 Investors were disappointed by the Q1 revenue outlook that Delta Air Lines presented in mid-January. At the time, the carrier said it expected revenue per available seat mile (RASM) to increase 0% to 2% in the first quarter.

Furthermore, several leisure-focused airlines have reduced their Q1 forecasts due to pockets of demand softness. Fortunately, the business travel market -- which Delta relies on for much of its revenue -- appears to have held up better.

On Tuesday, Delta Air Lines said that RASM increased about 2% last quarter, which would be at the high end of its original guidance range. That comes on top of a strong 5% RASM increase in the prior-year period. Roughly 1 percentage point of the increase was driven by the American Express contract extension.

Not surprisingly, Delta expects its average fuel price to come in near or above the high end of its previous forecast range of $1.95 per gallon to $2.05 per gallon. However, a combination of strong operational performance and the timing of certain expenses means that nonfuel unit costs are set to rise just 0% to 0.5% in the first quarter. That compares to Delta's initial forecast of a 1% to 2% increase. Additionally, the company capitalized on its low share price by accelerating its share buyback plans last quarter, repurchasing $1.3 billion of Delta Air Lines stock. The more surprising piece of news from Delta on Tuesday was that it has extended its credit card partnership with American Express through 2029. The two companies' current deal wasn't set to expire until 2022, but it appears that American Express was willing to pay a premium to maintain a long-term relationship with its most important partner.

Delta Air Lines generated $3.4 billion of revenue from this relationship in 2018, up from $1.7 billion in 2012. Over that period, total annual spending on Delta-AmEx co-branded cards more than doubled to $92.4 billion on a 50% increase in the number of cardholders. Delta says that revenue from the American Express relationship tends to be more stable than revenue from regular ticket sales.

Delta expects the American Express partnership to continue delivering outsized revenue growth, with revenue projected to double again to around $7 billion by 2023. Much of this growth will likely be driven by continued growth in the cardmember base and higher cardmember spending. However, Delta also appears to have secured a better revenue split, as evidenced by the 1-percentage-point contribution to its Q1 RASM growth, highlighted earlier.

While Delta Air Lines stock jumped 7% as of Tuesday afternoon, it still trades for less than nine times the company's projected 2019 EPS. Moreover, Delta has ample room to continue growing its earnings in the years ahead. A multiyear cost-cutting program, fleet renewal, the addition of more premium seats on Delta's aircraft, and the growth of the high-margin American Express revenue stream should all support long-term EPS growth.

In recent years, investors haven't given Delta much credit for this earnings growth potential due to demand and fuel-price volatility that have impacted the carrier's profitability. However, with solid EPS growth likely over the next couple of years, Delta Air Lines' stock may finally be ready for takeoff.