How many will convert to paying subscriptions?

Apple (AAPL 2.44%) unveiled four new services last week, of which only one has actually launched. Apple News+, the company's new magazine subscription service that grants access to a catalog of over 300 periodicals, became available immediately after the presentation via a software update. Apple Card, Apple Arcade, and Apple TV+ will all have to wait until later this year. Apple News+ was built on the foundation of Texture, a nearly identical service that Apple had acquired about a year prior and is getting shut down at the end of May.

The Mac maker reportedly was able to garner 200,000 subscribers within the first 48 hours of launch. 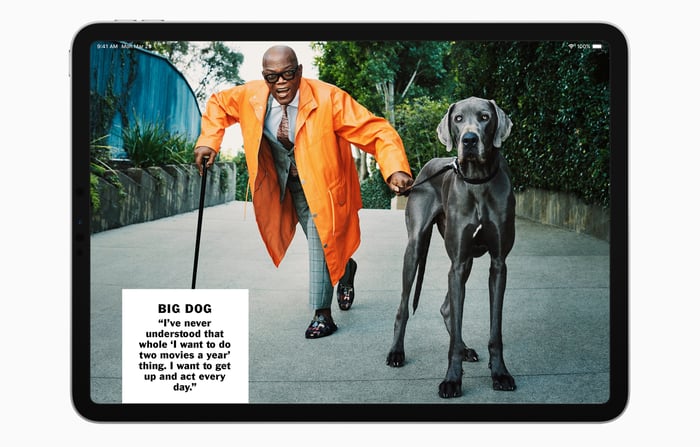 The New York Times reported that figure while noting that 200,000 subscribers was "more than Texture had amassed at its peak," citing two anonymous sources. That's peculiar, since Texture CEO John Loughlin had said in 2016 that the magazine service had garnered "hundreds of thousands" of paying subscribers.

For now, Texture is still operating before the planned shutdown, and its subscriber base is separate from Apple News+. Apple is offering a one-month free trial to Texture subscribers in an effort to move them over to Apple News+, except many Texture subscribers are on Android and Apple News+ isn't available on the competing mobile platform. Many non-iOS Texture users who had been yearslong subscribers are understandably frustrated by the move, as they aren't willing to switch platforms.

A rounding error in revenue

At face value, 200,000 subscribers paying $10 per month would translate into $24 million in annual revenue. However, keep in mind that anyone who has signed up for Apple News+ is still currently enjoying their one-month free trial, and the real test will be how many of those users convert into paying subscribers. Additionally, Apple has likely continued to add free trial users in the days since.

Obviously, $24 million in annual revenue is a rounding error, both for Apple's broader business and its services segment. The company generated $41 billion in services revenue in 2018. Apple's partnership with Alphabet subsidiary Google granting the latter company the lucrative default search engine spot in Apple devices is driving most of the growth.

Apple News+ isn't going to move the needle one way or the other.

If Apple really wants to grow Apple News+, there are two easy levers it could pull. Most obvious is offering Apple News+ across other platforms. That would not only satisfy disgruntled Texture subscribers, but also open up the service to the rest of the market.

Investors have seen Apple become increasingly open to cross-platform support for other services as it seeks to grow the services business, including bringing Apple Music to other platforms and supporting numerous third-party video-streaming platforms with the forthcoming Apple TV+. The tech behemoth is bringing its Apple TV app to many smart TV brands, as well as Amazon.com's Fire TV and Roku. There's no reason it can't do the same with Apple News+.

Furthermore, Apple could attempt to bundle Apple News+ with other services, which it is reportedly considering. The company has yet to announce Apple TV+ pricing, but bundling video, music, and news together for a discounted price could offer an enticing value to prospective subscribers that are on the fence.