Management spurs growth by balancing a handful of top-line priorities.

Shares of Paychex (PAYX 0.31%) have appreciated 31% over the last 12 months, or roughly 35.5% -- if, like me, you focus on total return. Investors have endorsed Paychex shares in part because of the company's relentless pursuit of double-digit revenue expansion.

In Paychex's third-quarter fiscal 2019 earnings released last week, total revenue advanced by 14% over the prior-year period to $1.1 billion. This increase was split nearly down the middle between organic growth and revenue gleaned from the company's $1.2 billion acquisition of Oasis Outsourcing Group Holdings, which was completed on Dec. 21, 2018.

Oasis is a human resources (HR) outsourcing corporation, known more commonly as a professional employer organization (PEO). Before its acquisition by Paychex, Oasis was the largest private PEO in the U.S. As corporations' costs to administer HR functions and to provide employee benefits rise, Paychex has invested heavily in the PEO model. The company also acquired Charlotte, N.C.-based HR Outsourcing, Inc. (HROI) in 2017 to beef up its PEO capabilities.

The PEO business falls under Paychex's PEO and insurance segment (which adds employee health insurance, workers' compensation, business liability, and other types of insurance products to PEO offerings). These services are in high demand: Even after excluding the effect of the Oasis acquisition, management expects PEO and insurance services revenue to grow by 18% to 20% in fiscal 2019.

Yet Paychex continually reinvests in this mature segment, as it's central to overall results. In the third quarter of fiscal 2019, management solutions accounted for 77% of total company revenue. Management finds it eminently sensible to frequently upgrade the software and services that comprise the company's bedrock payroll services. 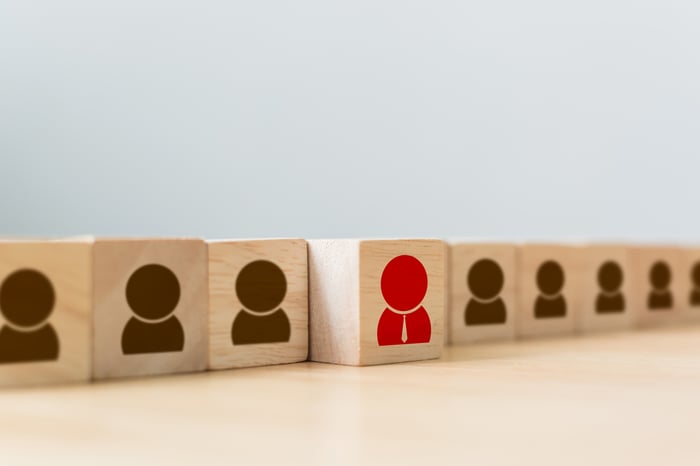 Management solutions' future contributions will remain significant. To cite one pertinent example, Paychex held an average of $4.4 billion of client funds in its accounts last quarter to fund payrolls and remit payroll taxes to the government. The company earned $23 million in interest income on this money -- an amount equal to roughly 5% of total operating income of $429 million during the quarter.

Thus, Paychex is engaged in a balancing act between feeding its cash cow, management solutions, while ensuring that its cash calf segment, PEO and insurance, also receives tangible growth resources. Nurturing these complementary revenue streams isn't Paychex's only balancing act, however; the organization has also recently achieved near-symmetry between organic and acquired growth.

Paychex is becoming something of a serial acquirer. While the Oasis transaction was the largest purchase in Paychex's recent history, acquisitions haven't been limited to PEO and insurance service. In March of last year, the company acquired the Lessor Group, a Danish firm specializing in payroll and HCM (human capital management systems), thus gaining wider exposure to management solutions services in Europe.

Through the first nine months of fiscal 2019, total company revenue of $2.8 billion increased by 10% year over year. According to management, the Oasis, HROI, and Lessor acquisitions contributed "less than five percent" of this growth. In other words, M&A activity supplied a bit less than half of Paychex's top-line improvement last quarter, while organic growth made up the balance.

Any significant future acquisitions will likely rely on borrowed funds. The company has traditionally only indulged in sporadic and small amounts of long-term borrowings; it now holds $800 million in long-term debt on its balance sheet following the Oasis acquisition. But Paychex has ample capacity to take on more debt. Given $1.5 billion in trailing 12-month EBITDA, Paychex sports a debt-to-EBITDA leverage ratio of roughly 0.5, a measure that indicates relatively low leverage. By my calculation, the company could easily add another $4 billion in long-term debt to its liabilities before shareholders begin to fret about its debt load.

Given Paychex's successful balancing acts, is now a good time to add the PAYX symbol to your portfolio? Both Paychex and larger rival ADP are presently trading at a premium to the broader market, sporting forward price-to-earnings ratios of 28 and 30, respectively. This is perhaps an indication of payroll providers' ability to improve earnings alongside the growth of the broader economy while also prospering during downturns, due to evergreen markets for human capital management and payroll services.

I believe Paychex may present more compelling value at a lower entry point. Should last year's overall market volatility return at some juncture in 2019, investors with a long-term mindset may consider picking up shares if and when a sell-off readjusts Paychex's current trading multiple.