Microsoft (NASDAQ:MSFT) has broad exposure to a lot of different markets within tech. The company's sheer breadth, coupled with its strong positions within most of the markets that it serves, has allowed it to become one of the most valuable technology companies on the planet.

One area where Microsoft is a major player is in the world of gaming. The company develops the Xbox line of game consoles and related services, has multiple in-house game development studios, and also offers the Windows operating system, which is the main platform for the growing PC gaming market. 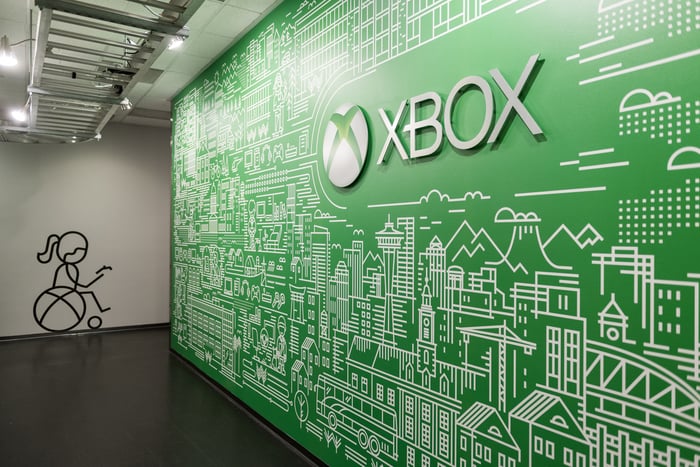 Here, I'd like to go over the basics of Microsoft's gaming business.

Where are the financials recorded?

Put simply, if it's related to Xbox, it goes under the company's gaming business.

How big is Microsoft's gaming business?

Putting that into perspective, Microsoft's total revenue in fiscal 2018 was $110.36 billion, so gaming made up a little more than 10% of the software giant's net revenue that year. Gaming is both a meaningful part of the company's more personal computing segment as well as its overall revenue.

While the company's fiscal 2019 isn't over yet, it's worth noting that during the first six months of that year, Microsoft's gaming revenue reached $6.97 billion, growing 20% from the first six months of fiscal 2018. Gaming made up 11.3% of the company's revenue during that period, growing a bit from 10.9% in the same period a year ago. So not only is gaming a significant part of Microsoft's business, it's growing in importance.

On Microsoft's most recent earnings call, CEO Satya Nadella provided some additional insight into its efforts in gaming. The executive said that the company "acquired two new studios this quarter, bringing the total to 13 and more than doubling our first-party content capacity in the past six months."

This is extremely important because the greater the number of compelling exclusive games that exist on a particular gaming platform, the more likely it is that platform will succeed. Microsoft's gaming business is certainly successful, but it's widely known that a key edge that rival game console maker Sony has over Microsoft is that the former's PlayStation 4 platform has a greater number of compelling exclusive titles than Microsoft does on its Xbox platform. Building out a stable of strong in-house studios is one way Microsoft seems to be hoping to gain ground against Sony.

Nadella also provided some additional metrics, claiming that Xbox Live monthly active users "reached a record 64 million with the highest number of mobile and PC users to date," and also observing that its Minecraft franchise "delivered record revenue as we expanded into new platforms, geographies and segments like education."

And, given that Alphabet's Google recently drummed up hype for its Stadia cloud gaming service, it's worth noting that Nadella said that Microsoft's own cloud gaming effort, known as xCloud, "will be public-trialed later this year as we make progress on our ambition to build a world-class gaming platform spanning mobile, PC and console."

Gaming is a hot market that seems poised to only get more exciting over time. Microsoft's gaming business is contributing to the company's financial results today and should help fuel its growth for tomorrow -- and beyond. I think that Microsoft investors should be quite pleased with how the company has gone after the gaming opportunity and should be confident that it will continue to make the right moves to ultimately thrive in this industry over the long term.