Please ensure Javascript is enabled for purposes of website accessibility
Log In Help Join The Motley Fool
Free Article Join Over 1 Million Premium Members And Get More In-Depth Stock Guidance and Research
By Asit Sharma - Updated Apr 5, 2019 at 8:20AM

The company advised investors on its sales benchmark, a shifting gross margin profile, and the manner in which new products will create shareholder value.

In its fiscal second-quarter 2019 earnings report, released this week, Acuity Brands (AYI -1.52%) demonstrated to investors that it's successfully navigating the impacts of import tariffs through a combination of strategic pricing and productivity initiatives. The commercial and industrial lighting and controls manufacturer also provided deeper insight into its profit margins and current product innovation. Below, let's review three comments made by CEO Vern Nagel during the company's earnings conference call that address and illuminate these topics.

1. Acuity is outpacing its revenue benchmark, and aims to do so over the long haul

Our rate of growth over this time period was far in excess of the overall growth rate of the lighting industry in North America, which we believe was up low single digits.
-- CEO Vern Nagel

Acuity believes that the first half of the fiscal year provides a more accurate sales gauge than the second quarter, as significant customers pulled orders forward in the first quarter to avoid impending price increases that Acuity instituted to offset rising costs from import tariffs.

In addition, while Acuity sells its lighting, controls, and Internet of Things (IoT) "smart building" platforms internationally, it benchmarks its progress against its largest geographical region, North America.

The company expects the North American lighting market to grow in the low single digits for the remainder of its fiscal year, and is poised to exceed this benchmark throughout the year.

Management intends to outpace the market's growth over the longer term in part through its investments in data capture and analytics. In its approach to lighting and controls, Acuity seeks to assist organizations in "transforming buildings and campuses from cost centers to strategic assets." 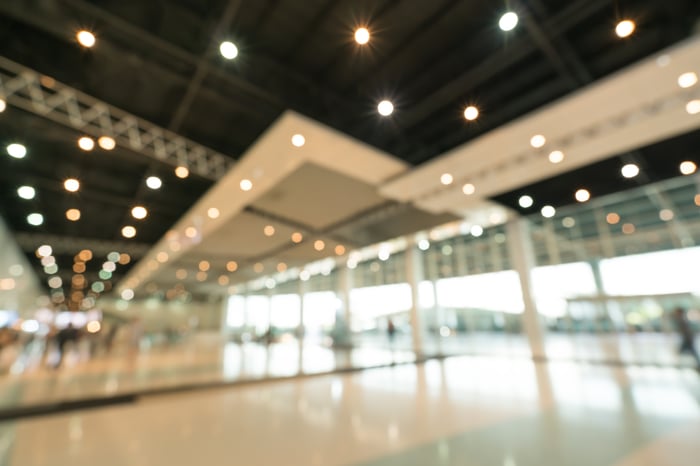 While our overall net sales of products sold through the retail channel were up 4% in the second quarter, net sales by key customers within this channel changed significantly. Each of our key customers in this channel have different service requirements, which impact how we account for these differences under generally accepted accounting principles. We believe the impact of this customer shift within this channel accounted for a large portion of the decline in overall adjusted gross profit margin in the second quarter compared with the year-ago period.
-- Nagel

Acuity's adjusted gross margin dipped by 100 basis points year over year to 39.2% in the second quarter, primarily because of the factor Nagel cites above: Certain customers in the company's retail channel shifted their service requirements, causing the company to reclassify income and expense amounts according to GAAP.

While this is a long-term, though not huge, headwind on gross margin, both Nagel and CFO Ricky Reece went on to explain that Acuity has an offset to this pressure in the form of lower selling, distribution, and administrative (SD&A) expense.

Specifically, the shift in retail channel service revenue resulted in lower freight and commission costs during the quarter, and this dynamic is expected to continue. In addition to productivity initiatives aimed at reducing overhead expenses, management advised investors to expect a shift in efficiency from gross margin to SD&A for the foreseeable future. In other words, the company intends to fully absorb a gross profit decline through leaner selling, distribution, and administrative operations.

3. Investments in technology-laden lighting will improve profitability in the long run

[W]e are always striving to improve our profitability through our continuous improvement efforts. However, we believe for any meaningful gross profit margin improvement to occur, we will need to continue to capture our implemented price increases, as well as experience an acceleration in market demand for more technology-enabled lighting solutions, particularly for larger commercial projects where our contribution margins are more favorable due to the complex nature of these types of projects.
-- Nagel

Increasingly, Acuity views itself as a technology company as much as a manufacturing concern. This is partly out of necessity: The organization has been compelled to invest in cutting-edge technology to preserve profitability as its products are challenged by a raft of cheaper lighting alternatives, many of them from Chinese companies that enjoy government subsidies.

Thus, Acuity is enhancing Atrius, its higher-margin, IoT platform for commercial and industrial buildings. The company has seen an increase in uptake of this smart-building line of products among major U.S. retailers. Nagel noted during the earnings call that Acuity was becoming an industry standard for retailers seeking IoT-based luminaire (complete electric lighting unit) systems.

While it may take several quarters, or even a few years, for the company's next-generation lighting and controls platforms to reach enough scale to significantly impact margins, they'll ultimately create much shareholder value if successful. More importantly, such investments will help remove Acuity further from the ever-present condition of having to compete primarily on price.