With a current market cap of just $13.6 billion, Dover Corporation (NYSE:DOV) isn't one of the most widely followed stocks, but that doesn't mean it's not attractive to value investors. In fact, shares are up by nearly a third in 2019 alone, and have significantly outperformed the S&P 500's year-to-date gain of 13%.

What's going on, and is Dover still attractive for value investors?

There are two key aspects of Dover's business that are of interest to value investors. First, over the last five years, Dover has significantly restructured by separating two specialized businesses, leaving it more focused on its core industrial competency. As a consequence, it's a lot easier for investors to understand the stock. 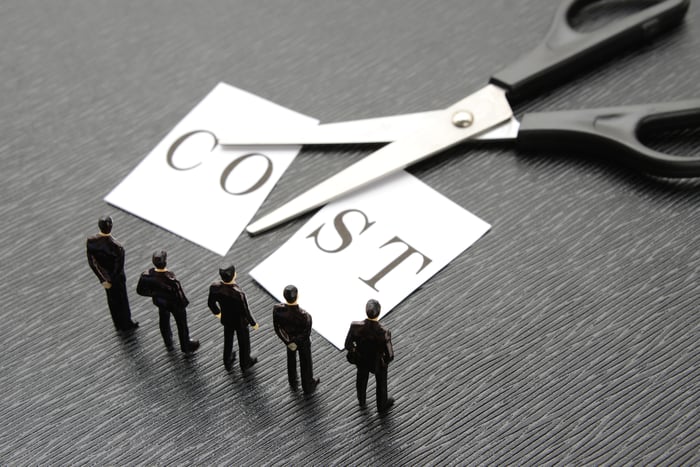 Interestingly, Knowles and Apergy have both done very well in 2019, rising 33% and 52% respectively year to date, so it's been a good year for long-term holders of Dover and its spinoffs.

All told, the investment proposition for the portion of Dover that remains is now simpler to understand. This should please value investors, who often look at a company's prospects for improving operational performance, rather than try to guess the direction of its end markets.

Second, Dover's remaining business has an opportunity to significantly improve margin performance and free cash flow generation. Moreover, much of it is due to self-help initiatives.

Back in September, CEO Rich Tobin unveiled a plan to generate significant cost savings and turnaround performance at two businesses: retail refrigeration (in the refrigeration and food equipment segment) and Dover Fueling Systems (in the fluids segment).

The plan is to cut costs and generate margin expansion leading to operating cash flow of some $2.5 billion to $3.5 billion from 2019 to 2021. Assuming 2% to 4% of revenue on capital expenditures, Dover will generate somewhere in the ballpark of $1.9 billion to $2.9 billion in free cash flow (FCF) over the next three years. Based on the current market cap of $13.6 billion, this would put Dover at a market-cap-to-FCF ratio between 14 and 21.5.

Although that's a pretty wide range, the midpoint is less than 18, and that's an attractive multiple for a company that should exit the period with a structurally lower cost base. The question is whether Dover can hit its targets or not.

There's reason to be positive on this front. For example, at a recent investment conference, Tobin said that turning around the retail fueling business was largely a self-help issue, relating to realigning the company's market strategy and manufacturing footprint in Europe. Meanwhile, Dover sees improving margin at retail refrigeration as coming evenly from self-help initiatives (downsizing in response to weaker-than-expected demand, and changing its product mix) and an improvement in end-market demand.

In other words, margin improvement is largely down to management's action. 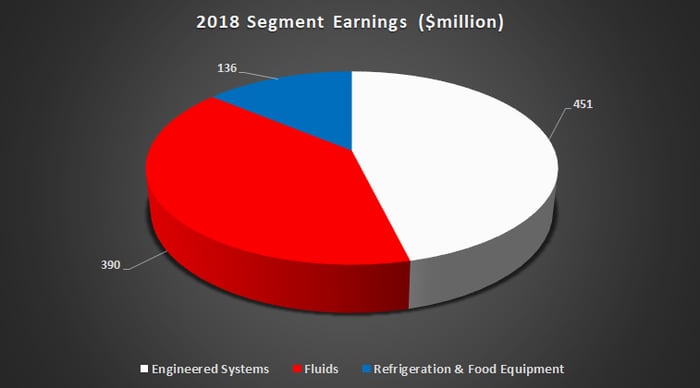 Moreover, there appears to be a lot of deadwood that can be cleared. For example, Tobin argues that the company's gross margin puts it in the middle of its peer group, but its operating margin is the lowest because its SG&A (selling, general and administrative) costs as a share of revenue are the highest.

Good gross margin implies that Dover's products do have pricing power, but the weak operating margin suggests it's not doing enough from an administrative perspective to improve the bottom line. 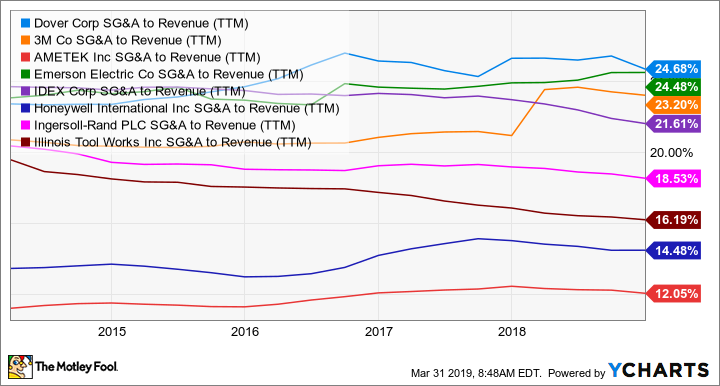 The good news is that during the fourth-quarter earnings release in January, management confirmed 2019 targets while reporting an 8% growth in bookings -- usually indicative of future growth.

What does it mean for value investors?

All told, Dover's stock is rising because the company appears on track to hit its guidance, and that guidance would put the stock at an attractive valuation. To be fair, there's still a long way to go, and the stock is obviously not as good a value as it was a few months ago. The forward price-to-earnings ratio now stands at 16.4, which looks OK given the patchy history of execution.

Dover is definitely a stock to keep on the watch list. Any sentiment-led drop in its price could lead to a buying opportunity, because management appears to have several pathways to improve margin performance, earnings, and FCF in the years to come.