Please ensure Javascript is enabled for purposes of website accessibility
Log In Help Join The Motley Fool
Free Article
Join Nearly 1 Million Premium Members And Get More In-Depth Stock Guidance and Research
By Daniel B. Kline – Apr 6, 2019 at 8:18AM

Money isn't the only factor when making a decision to attend or not (but it's a pretty important one).

It's not only expensive to throw a wedding, but it can also get pricey just attending one. In fact, the expense of going to a wedding climbs in direct proportion to how close you are to the bride and groom.

Those are big numbers, and they explain why sometimes people have to decline a wedding invitation. In fact, nearly 20% of Americans admit they have turned down a wedding invite, according to a new report from Bankrate. 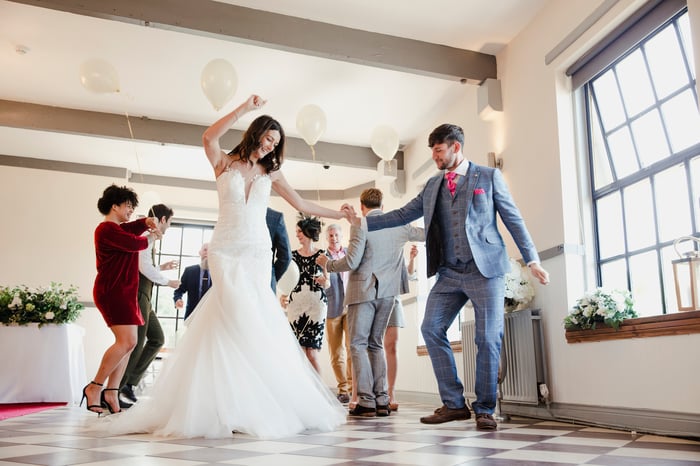 Sometimes money is a valid reason not to attend a wedding. Image source: Getty Images.

It's not easy to turn down a wedding invitation, as by doing so you risk offending one or both members of the couple getting married. That does not mean you should accept an invite to a wedding that you simply can't afford. The majority (seven out of nine) of wedding experts consulted by Bankrate said that finances were a viable reason to turn down an invite.

"Not only are weddings expensive for a couple to plan, they can be a budget-buster for guests, as well," said Bankrate analyst Kelly Anne Smith in a press release. "A person should not risk going into debt in order to celebrate the occasion with friends or family."

Choosing not to attend a wedding -- even when it's for valid financial reasons -- can cause negative fallout. About one-third (30%) of survey takers said that not attending a wedding due to its cost strained their relationship with the marrying couple.

Be transparent. If you honestly can't afford to attend the wedding, explain your situation to the bride and groom. Before you do that, however, make sure you actually can't afford it rather than choosing to not afford it.

The marrying couple may be understanding, but if they see you take a vacation the week after their wedding, well, then they may not be as forgiving of your decision not to go. (Now, if you have already booked something and have nonrefundable charges, be clear about that.)

You can't control people's emotions. You should not go into debt or take on an expense you honestly believe you can't afford just to attend a wedding. If the couple getting married aren't forgiving, that will be painful, but it's also telling.

Make your best effort to keep everyone happy, but don't give in to unreasonable behavior. You should not spend money you don't have to appease your friends. If you wish them well, send a gift, and explain why you're declining, and that's still not enough, you can at least take solace in having done the right thing.