Activist hedge fund manager Bill Ackman, who runs Pershing Square Holdings (LSE:PSH),  is a well-known figure and no stranger to controversy, as he often invests with an eye toward shaking up management teams in either a friendly or not-so-friendly manner.

Coming off a run of losses over the past four years, Ackman's portfolio has bounced back in a big way in 2019 -- up a whopping 31.9% through March 19 according to its annual report. Ackman attributes Pershing Square's recent success to getting back to easy-to-understand businesses, many of which are in the retail sector.

One new position Ackman took in 2018 is home improvement giant Lowe's (NYSE:LOW). Lowe's is a simple, easy-to-understand large cap retailer known to many investors. So why does Ackman think there's so much untapped potential? 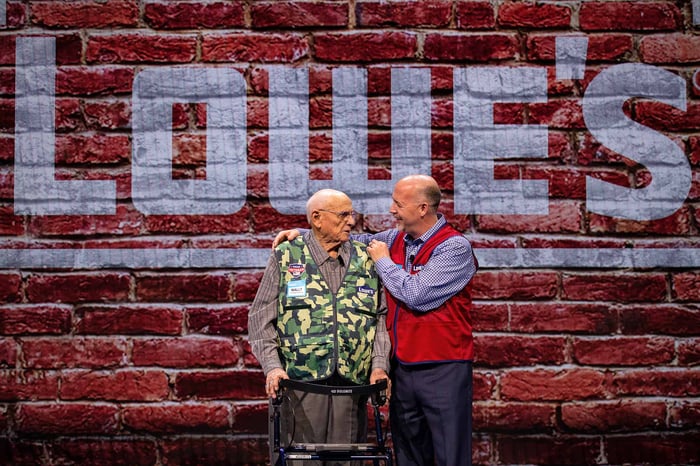 The black sheep of home goods

The market for home goods and building supplies is fragmented, but the two leading players are Lowe's and Home Depot (NYSE:HD). Despite selling similar products and services, there's been a clear divergence in performance during the recent past, with Home Depot coming out ahead. 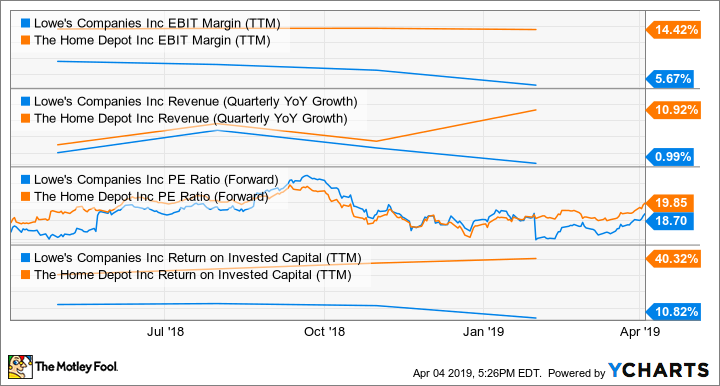 Lowe's results aren't quite as bad as these look. Last year, Lowe's exited several noncore businesses and the country of Mexico. These closures, along with several goodwill impairments and changes in accounting standards, affected both the company's operating margin and returns on capital.

Still, Home Depot is pretty much winning on all fronts: faster growth, with higher margins and better returns on invested capital. So why would an investor wager on the laggard?

New blood at the top

Basically, Ackman's thesis is that Lowe's has both a new CEO and an entirely refreshed top management team who will be able to close the gap with its better-performing rival.

New CEO Marvin Ellison officially started on the job last July 2. Ellison was recently the CEO of the struggling JC Penney (OTC:JCPN.Q), but perhaps more relevant is his prior 12-year stint as executive vice president at Home Depot, and another 15 years at Target (NYSE:TGT). Ellison also shook up Lowe's management, inserting his own hand-picked executives, including a new CFO, chief merchandise officer, EVP of stores, and EVP of supply chain.

At its recent Analyst and Investor Day, Lowe's unveiled new long-term targets of 12% operating margins and 35% returns on invested capital. Those levels may be realistic, as both targets are still below Home Depot's. So, how does Ellison plan to get there?

While it's not the sexiest plan in the world, Ellison's plan is simple and pragmatic. He thinks that Lowe's has fallen behind in terms of in-store improvements, distracted by ventures into noncore businesses and geographic expansion into Mexico. As a result, Ellison has begun exiting ancillary businesses and closing underperforming stores since he took over.

Lowe's tends to exist in less-dense suburban areas; Home Depot beat the company into more urban markets with slightly smaller stores. As populations have moved from the suburbs to urban markets over the past decade, Home Depot has thrived, and many Lowe's stores may simply be in the wrong spot. So, the store portfolio management is an appropriate step, even if it impairs Lowe's growth in the near term.

In addition to closing underperforming stores, Ellison plans to invest in technology to improve both customer service and efficiency. During the December Analyst Day, Ellison lamented that employees often have to use dry-erase boards and physical binders to help customers manage their home projects instead of digital tools. Another example of subpar systems revealed itself when Lowe's website crashed during Black Friday.

In addition to better customer-facing digital tools, Ellison outlined plans to improve employee scheduling, inventory management, and merchandising that can all help to boost Lowe's performance.

These plans are not exactly earth-shattering by any means, but that doesn't mean there can't be a big improvement in Lowe's share price as a result.

Lowe's trades at about 18.7 times this year's earnings estimates, which is a bit below Home Depot's 19.8 PE ratio. In addition, Ackman contends current estimates don't fully incorporate the improvements outlined in Ellison's plan. So, a meaningful bump in profits and a slight bump in valuation could add up to a big bump in share price.

In addition, Lowe's appears to have relatively limited downside, having posted positive same-store sales each of the past few years, despite less-than-ideal execution. That's a function of its oligopoly with Home Depot and relative immunity from e-commerce, compared with other retailers.

Of course, there are risks as well. Ellison's plan might take time to implement -- as in years -- and Home Depot isn't exactly going to stop improving either. While an entirely new management team comes with opportunity, there's also a risk to changing a culture at a large organization.

Finally, there's been some debate recently about the health of the housing market. Ackman is a believer in the U.S. housing cycle, but if it should go through a downturn, it could pose problems for the entire industry.

All in all, Lowe's appears to be an interesting turnaround situation, and shareholders receive a 1.75% dividend as they wait. While I don't think it will be the most exciting investment over the next few years, there's not too much risk here, so interested investors should monitor Ellison's plan's progress as 2019 moves on.